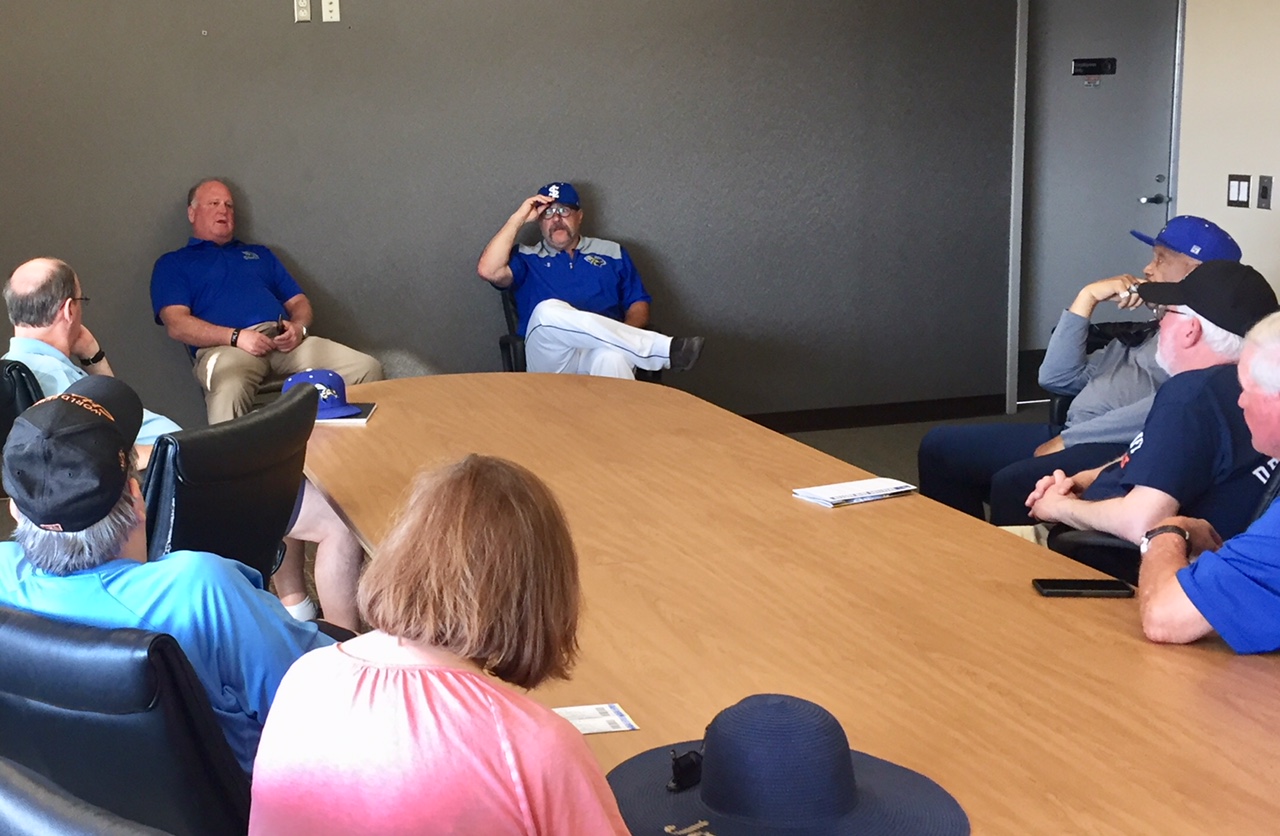 Twenty-one members of the Larry Dierker SABR Chapter showed up on Thursday, May 17, 2018, at Constellation Field in Sugar Land for what, after a record setting day for hear, turned out to be a great night for baseball. Prior to the meeting our SABR group was hosted by the Skeeters GM, Jay Miller, for an impromptu meeting with new manager Pete Incavigilia. SABR favorite Deacon Jones and part-owner Kevin Zlotnik were, also, in attendance.

Topics were varied and ranged from Oklahoma State’s rivalry with the Texas Longhorns to Mike Schmidt singling off a speaker in the Astrodome. Jay and Pete spoke of their long affiliation with each other: Jay was ticket manager when Pete signed with the Texas Rangers, Jay was GM of New Orleans when Pete finally made the minors with the Astros, and now they are together again with the Sugar Land Skeeters.  Pete told a great story about how much former Astro Casey Candaele liked to prank everyone with the New Orleans team. He said after a night of drinking he got a phone call about 2 in the morning and the caller said it was Gerry Hunsicker. He said he answered, “Quit calling me, Casey, I know its you and hung up.” Phone rang again saying it was Gerry Hunsicker, and he hung up. The 3rd time it rang the voice said “Don’t hang up, Pete, this is really Gerry Hunsicker; at which point he realized his mistake and started talking about Candaele. Hunsicker replied that it was okay, he knew Casey, and Pete got called up to the Astros. That was the 1998 team that won 106 games before being eliminated after running into Kevin Brown and the Padres, despite having traded for Randy Johnson.

Pete said that without a doubt his greatest thrill was hearing his name when being introduced at the 1993 World Series while with the Phillies. Even though they eventually lost to Toronto, “getting to play in a World Series is what every player dreams about and is why they put on their uniforms every day.” In summation, the food was great and the Skeeters staff could not have been more hospitable to our SABR group. Our Q&A meeting lasted for about 45 minutes and the Skeeters got a well deserved round of applause at its conclusion. The Skeeters team spotted the Blue Crabs 5 runs in the top of the first, then spent the game trying to battle back from that deficit. The winning run was at the plate with two on in the bottom of the ninth before a fly ball to the outfield ended the 10-8 game. The weather cooled down around the 3rd inning and their were lots of tales of baseball and life floating out into the night air from our SABR members grouped together in left field throughout the game. All in all, a very enjoyable evening.