On June 16, 2018, the Larry Dierker Chapter had 20 attendees, including two very special guests, meet with us for our first Saturday meeting this year. We gathered at the Jax Grill on Shepherd Drive and were led by Mike McCroskey. The meeting was very enjoyable. 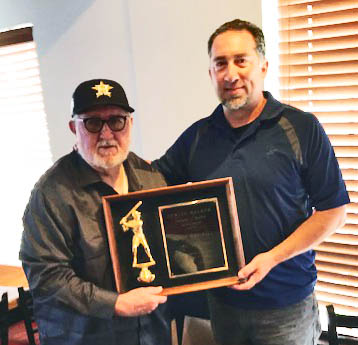 The meeting started with an excellent presentation by Bill McCurdy to the great-grandson of Curt Walker. Mr. Walker was inducted in the Texas Baseball Hall of Fame in 2001 but was not alive to receive his plaque and other honors associated with the installation. After years of research and investigation, Bill was able to find a living relative of Curt, his great-grandson, Rob Zimmerman of Charleston, S.C. Rod and his wife Stacey were with us and were presented with the TBHOF plaque, a photo of Walker wearing a New York Yankees uniform, a replica Cincinnati cap of the era, and an autographed bat signed by all the other inductees in 2001. For more info on the presentation, please read Bill McCurdy’s article at https://bill37mccurdy.com/2018/06/17/curt-walker-a-timeline-into-fathers-day/ 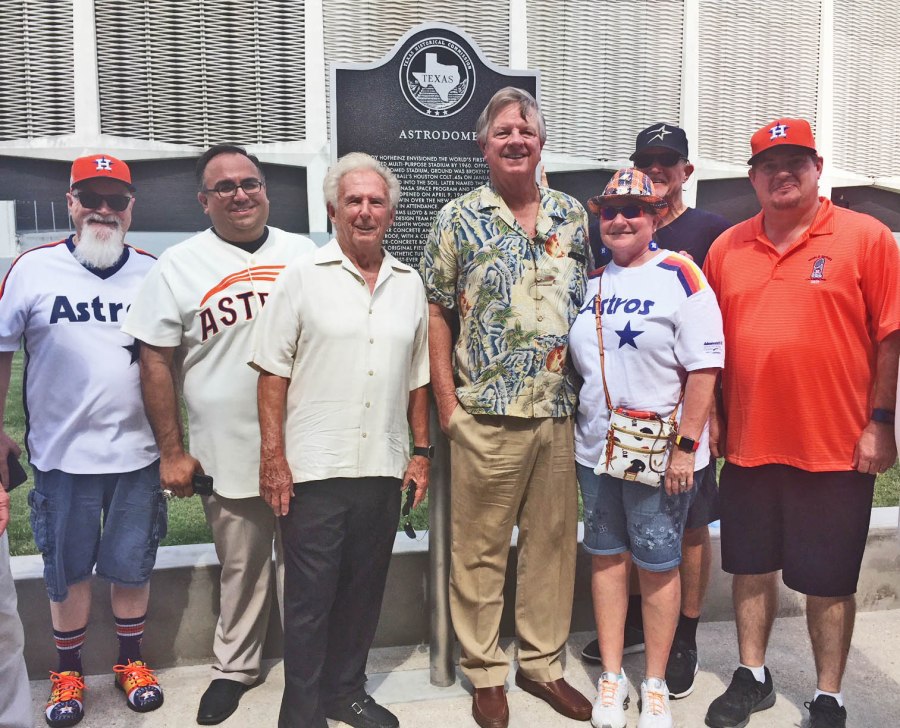 Mike Vance brought us up to date on the status of the Astrodome, what will take place, and estimated dates for completion.

Following that several members brought in their favorite collectibles and we had “Show and Tell Time.” Mike McCroskey led off with his display of 2017 Astros playoff tickets plus four unique baseballs, Mike Vance had an autographed baseball from Rice University when he was the radio voice of the team, Bob Dorrill displayed his personalized original cartoon from the legendary Willard Mullins and how he acquired it, Tom White with the help of Fred Soland talked about baseball player autographs and the many forgeries, Tom Plemons showed us his Tony Eusebio game-used bat he acquired the hard way, Dick Bily brought numerous signed Yankees baseballs, Mark Wernick, whose birthday was that day, told of a surprise letter he had just received from Bobby Shantz, and Bob Stevens showed a copy of the vintage Mickey Mantle Topps card he had pulled out of burning leaves as a youth and recently sold for big money.

We also had a book exchange where more than 50 books changed hands.

At the meeting we sold 22 of our 40 tickets for the August 11th Astros game. If you plan to attend with us, please forward your checks ASAP as they are on a first-come, first-served basis. Tickets are $45 each and checks should be made out to the Houston Astros and mailed to Bob Dorrill at 2318 Crimson Valley Ct., Kingwood, TX 77345.

We will have no meeting in July but reconvene on August 11 at Minute Maid Park.