Nine members and guests of the Rogers Hornsby Chapter in Austin, Texas, watched the San Francisco Giants continue their good baseball play, taking a three-games-to-none lead on the Detroit Tigers on October 27, 2012.

Jim Baker hosted the watch party, supplying a delicious barbeque assortment of ribs, brisket, turkey and sausage, along with yummy sides such as potato salad and baked beans. Special thanks to Jim for hosting for the second consecutive year.

Most of us were impressed with Giants catcher Buster Posey’s inexplicable catch of a fast ball that appeared to have gotten by him. Even home plate umpire Fieldin Culbreth, who was wearing a microphone during the game, thought the ball had gotten past Posey.

Below is the graphic Jim Baker modified for the watch party announcement. 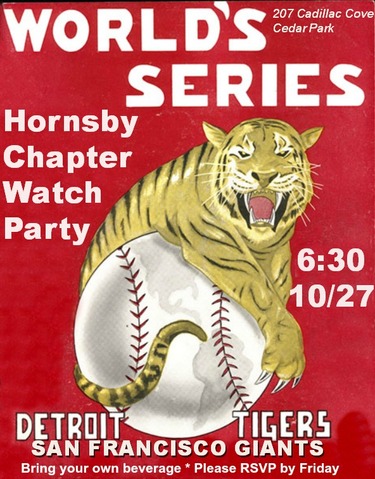 For more information on the Rogers Hornsby Chapter, visit http://chapters.sabr.org/hornsby.