Thirty-two Southern New England Chapter members and guests were treated to a virtuoso performance by former major league infielder Richie Hebner, the guest speaker at the chapter’s meeting on Saturday, June 11, 2022. Click here to view a photo gallery of this meeting at Flickr.com, courtesy of Dixie Tourangeau.

Hebner, a major leaguer for 18 years (1968-1985) most closely identified with the Pirates and with his offseason career as a gravedigger (working for his father’s company), held forth for almost 90 minutes, describing his career, spinning anecdotes, and generally keeping the audience entertained.

The meeting was held at the First Baptist Church in North Attleboro, Massachusetts. Pastor Stephen Trimble is a member of the Southern New England chapter. Hebner, still lively at age 74, lives in nearby Walpole, Massachusetts.

As always, there was time for some research offerings. Presenters were Steve Krevisky (Events That Took Place during “2” Years); Mark Kanter (Playing Stratomatic365 During the Pandemic); Jim Ricci (The Pawtucket Red Sox: How Rhode Island Lost Its Home Team); Alan Cohen (Josh Gibson’s Home Run Pursuit); and Dixie Tourangeau (Frank Isbell’s Revenge). Bill Nowlin discussed his latest book, “The Kid” Blasts a Winner, as well as plans to do a SABR book on the 2004 Red Sox.

The meeting began at 11 a.m. and closed just before 4 p.m., after the usual baseball book raffle. A ballpark lunch was prepared by a church women’s group.

The chapter will meet next on November 26, the Saturday of Thanksgiving weekend, at St. Philip’s Parish Center in Greenville, Rhode Island. If you want to do a presentation or have an idea for an agenda item, contact me at lenlevin5@hotmail.com. 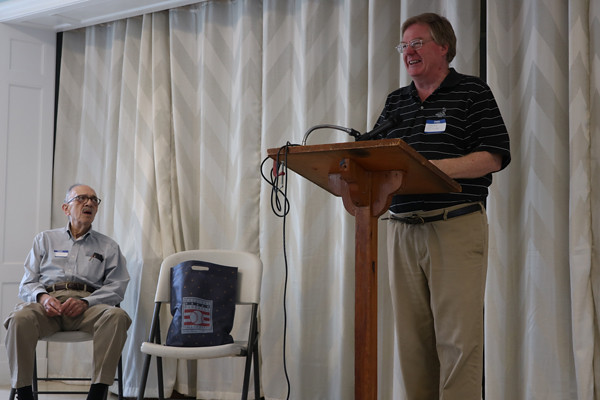