Editor's note: The SABR Salute, first bestowed upon writer Fred Lieb in 1976, was designed as a manner of recognizing the contributions of some of the older members of the Society. Subsequent SABR Salutes appeared in the SABR Membership Directory and honored members who had made great contributions to baseball historical research. Bob Davids (1926-2002) received the SABR Salute in 1981; the following biographical sketch appeared in that year's membership directory. 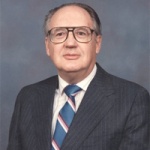 In this tenth anniversary year, the Society's annual salute goes to the "founding father," L. Robert Davids of Washington, D.C. It took a formal motion at a recent executive board meeting to overcome the resistance of the modest, low-key U.S. Government official, who felt he did not have the age or service to merit such an accolade.

Bob was born on a farm in Northern Iowa in 1926 and grew up listening to an obscure radio announcer named Ronald Reagan broadcasting Chicago Cubs' games and reading about the state's teenage pitching sensation, Bob Feller. He played the outfield on the Kanawha High School baseball team while harboring a resentment against the coach for not letting him pitch. This situation was corrected in Bob's senior year when the coach shifted to Garner, a larger city with a much higher school enrollment. The biggest day of his young life came April 26, 1943 when Bob, pitching for Kanawha, shut out Garner, 6-0. He carried the newspaper clipping around in his billfold for many years, but never actually showed it to anyone.

At age 17 Bob enlisted in the Army Air Forces (that's what it was called then). When he returned from World War II duty in the Pacific in 1946, he enrolled at the University of Missouri, where he received a journalism degree in 1949 and a master's in history in 1951. After moving to Washington to begin his government career, he enrolled at Georgetown, where he received a Ph.D. in international relations in 1961. Most of his government work at the Pentagon and the Atomic Energy Commission has been in the writing field, but he did head the U.S. Secretariat at the International Nuclear Fuel Cycle Conference in Salzburg, Austria, in May 1977.

Bob began writing freelance articles on baseball for The Sporting News in 1951 (a four-inch column on Ralph Kiner's career home-run percentage netted him a first check for $7.50, he recalls). His research expanded over the years, thanks primarily to the resources of the Library of Congress. He had several full-page articles in The Sporting News by the time publisher J. G. Taylor Spink died in 1962. The publication subsequently changed its coverage of baseball and statistical-historical articles were no longer used. Bob received a number of calls and letters forwarded by TSN saying, "Hey, I liked those articles. What happened?" One reader had even placed the articles in a scrapbook, along with those of John Tattersall, Keith Sutton and a few others.

In 1971 Bob began his own four-page newsletter called "Baseball Briefs." Essentially at the same time he developed a contact list of researchers, many of whom were subscribers, and asked if they wanted to organize. The response was sufficient to set up an organizational meeting at Cooperstown, N.Y., in August 1971. The development of SABR from that point on is outlined in sufficient detail in another part of this Directory.

Through all this he has conscientiously refrained from using the vertical pronoun, saying instead that "we" are doing this or "the Society" is doing that. Overall, that posture has probably been a good one. Nevertheless, the Society has functioned well in this ten-year period of rapid growth, and much of the credit belongs to Bob Davids.

Related link: Learn more about Davids and the other founding members of SABR, "The Cooperstown 16"