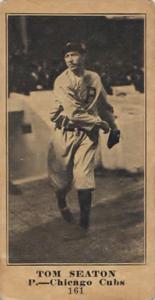 Nothing is more thrilling to a baseball fan than Opening Day of a new season. The excitement of the day makes a baseball fan wonder why Opening Day is not a national holiday. The way the ballpark is decorated with bunting around it, the atmosphere, seeing friends one has not seen over the offseason, and the new teammates one must get to know make for a pleasurable experience.

In 1913 the Federal League was a six-team minor league; for the 1914 season the league expanded to eight teams and declared itself a major league. The first game of the 1914 season was played on April 13, a contest between the Buffalo Blues and the Baltimore Terrapins. (Baltimore won, 3-2.) The next day there were three more Opening Day contests including one at Exposition Park in Pittsburgh between the Pittsburgh Rebels and the visiting Brooklyn Tip-Tops.

It was a bit cool, but the weather was fair.1 Recent rainstorms had left the field in far from perfect condition and when the Rebels turned out to practice on the 13th, the infield was not usable.2 Workers got busy and for Opening Day the grounds were in as good condition as possible given the circumstances.3 The Pittsburgh Post-Gazette reported almost 21,000 fans in attendance and they saw a parade of 100 automobiles and carriages.4 The Brooklyn Daily Eagle said, “The parade was led by a brass marching band and those who could not attend the ballgame were left with a look of good natured envy on their face.”5

Brooklyn manager Bill Bradley named Tom Seaton as his starting pitcher. Seaton was arguably the best pitcher in the Federal League; he had led the National League in wins in 1913 with a 27-12 record for the Philadelphia Phillies. He jumped his contract to play for the Tip-Tops. Seaton finished the 1914 season with a record of 25-14 but never again finished with a record above .500, except for his final season (1917) with the Chicago Cubs when he had a 5-4 record.

Doc Gessler managed the first 11 games for Pittsburgh before being replaced by player-manager Rebel Oakes. Although a pitching battle is hardly to the taste of the fans, especially on Opening Day, the crowd, good natured, but not overly enthusiastic in the early part of the game, warmed up to the situation as the game progressed.6

Elmer Knetzer was the starting pitcher for the Rebels and he was making his first appearance in a major-league baseball game since the 1912 season, when he was with the Brooklyn Dodgers. He had finished over .500 only in 1910, when he was 7-5 with the Dodgers. He went on to a 20-12 record in 1914 with Pittsburgh (the only time he won 20 or more games) and finished his major-league career with the Cincinnati Reds in 1917.

Knetzer got Brooklyn out in order in the first, striking out two. In the Pittsburgh half of the first inning, center fielder Rebel Oakes got Pittsburgh’s first hit in the Federal League when he singled to center field. He was thrown out trying to stretch the hit into a double.

Right fielder Danny Murphy recorded Brooklyn’s first Federal League hit when he doubled to center field with one out in the second inning. He was left stranded at second when teammates Tex Wisterzil and Ed Gagnier made outs.

Neither team had a hit or scored a run in the second inning. In the Pittsburgh third, second baseman Jack Lewis dumped a Texas Leaguer just over second base for the Rebels’ second hit.7

Brooklyn had a single by first baseman Hap Myers in the fourth and Pittsburgh got hit number three with a single by Oakes in the bottom of the inning. For Brooklyn in the top of the fifth inning Knetzer got Murphy to ground out and struck out Wisterzil. Gagnier singled over the Rebels shortstop but was caught trying to steal second. The Rebels had a scoring threat in the fifth: Tex McDonald had an infield single and Hugh Bradley was safe on a throwing error by pitcher Seaton. But McDonald was forced at third base by Lewis, Claude Berry grounded out to Seaton, and Knetzer was called out on strike.

From the sixth inning through the ninth, the only baserunner was Brooklyn’s Jim Delahanty, who in the seventh inning drew the first walk of the game.

Solly Hofman walked leading off the Brooklyn 10th and went to second on a grounder by Delahanty. Murphy walked, then Wisterzil singled to left field, scoring Hofman with the first run of the game.

In the bottom of the inning, Wisterzil caught Ed Lennox’s foul for the first out. McDonald struck out. Catcher Yip Owens dropped the third strike but grabbed the ball and threw out McDonald at first base. Seaton hit Bradley with a pitch but Lewis hit a grounder to third that Wisterzil tossed to first to end the game.8

Neither of the teams played perfect ball, but it is seldom that Opening Day sees such praiseworthy baseball played, opined the Pittsburgh Daily Post.9

Seaton, the winning pitcher, gave up four hits, hit a batter, struck out five and walked none. Knetzer allowed five hits and walked three. Of the nine hits in the game, only one was for extta bases, the second-inning double by Murphy.