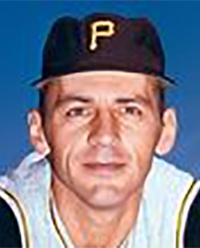 An MVP, a Cy Young, two future Hall of Famers and a world championship, the Pittsburgh Pirates presaged all these honors by battering the Cincinnati Reds, 13-0, in their 1960 home opener. Pirates shortstop Dick Groat scored three runs on three hits including a double while initiating three double plays to spark his eventual MVP campaign. Right-hander Vernon Law launched his push for the Cy Young Award by spinning a seven-hit shutout without a walk. Future Hall of Famers Roberto Clemente and Bill Mazeroski opened at home with their best games of the season. Clemente, perfect at the plate, smacked three hits including two doubles, a sacrifice fly, and five RBIs. Mazeroski knocked in four runs with a double and tape-measure home run while adding three double plays to his career record. The Pirates’ 1960 home opener served as a harbinger for the team’s first World Series championship since 1925.

The Pirates had lost their season opener on the road to the Milwaukee Braves, 4-3. Two days later, on April 14, they opened at Forbes Field before 34,064 fans, the largest Opening Day crowd in 12 years.1 Pittsburgh Mayor Joseph Barr threw out the first pitch to signal the 1:30 P.M. start.2 An odd mix of weather greeted the teams. Days earlier snow covered the outfield, making it spongy and rutted with just patches of grass.3 Juxtaposing this marsh, an unseasonal 83 degrees created muggy conditions to start the game.4

Law, who won 18 games the year before, faced the Reds’ 19-game winner Cal McLish. Both right-handers pitched perfect first innings. In the second, first baseman Frank Robinson flied out to Clemente. Law then hit right fielder Tony Gonzalez, setting the stage for the first of three double plays by Groat and Mazeroski. Catcher Ed Bailey provided the grounder to Groat that ended the inning. McLish struggled in the bottom of the second, giving up three runs on three extra-base hits. Clemente hit a one-out double off the left-field wall. Catcher Smoky Burgess followed with a double to the right-field wall to score Clemente. After a groundout, Mazeroski came to bat and stroked a two-run shot that cleared the combined 41 feet of the Longines clock above the left-field scoreboard.5 A sportswriter later asked him if the blast was the best ball he hit all spring. “The best ball?” Mazeroski said. “It was the ONLY ball.”6 It would not be his last by game’s end.

Law protected his three-run lead in the third by stranding Billy Martin, who opened the inning with a double. In the bottom half, the Pirates continued to rain extra-base hits on McLish. Groat found the left-field wall with a one-out double. McLish hit left fielder Bob Skinner with a pitch. That bruise set the table for Clemente’s second double, scoring Groat and Skinner and extending the lead to 5-0. In 1⅔ innings, Calvin Coolidge Julius Caesar Tuskahoma McLish yielded nearly as many runs as he had names. Right-hander Brooks Lawrence took over for his overdubbed teammate to end the inning on Burgess’s fly to center. Lawrence would retire the Pirates in order the next inning, but disaster awaited him in the fifth.

In the Reds’ fourth inning, Gus Bell hit a one-out single. The mild threat ended when Groat and Mazeroski erased him with their second double play. Lawrence easily ended the Pirates half of the fourth inning with a strikeout by center fielder Gino Cimoli and groundouts by Mazeroski and Law.

The Pirates closed out the top of the fifth inning with yet another double play. Gonzalez opened with a single to right field before Bailey fouled out to third. Martin then grounded to Groat, who fed Mazeroski to complete their third twin killing of the afternoon.

The Pirates unloaded on Cincinnati in the fifth inning. Lawrence faced seven batters; six of them scored. Third baseman Don Hoak opened with a walk and took second on another single by Groat. Skinner’s hit drove Hoak home and he took second on center fielder Vada Pinson’s failed throw to nab Groat at third. An intentional walk to first baseman Dick Stuartloaded the bases. Pinson then saved several runs with the best defensive play of the game. Clemente ripped a shot toward the 457-foot marker in left-center field. The area was so distant that the Pirates stored their batting cage there. Where the ball landed might have been a home run in most ballparks. Pinson raced to the cage. With his back to the plate, he made an incredible running catch over his shoulder. Pinson’s grab limited Clemente to a sacrifice fly that scored Groat.7Lawrence loaded the bases again with a walk to Burgess. Cimoli’s double scored Skinner and Stuart, chasing Lawrence from the game. Ex-Pirate Bob Purkey took over in relief. Mazeroski greeted him with the team’s seventh extra-base hit, a double that plated Burgess and Cimoli and widened the score to 11-0. Law nearly continued the onslaught, but lined out to Martin at second base, after which Hoak ended the inning with a strikeout.

Law breezed through the Reds’ sixth inning, sandwiching a strikeout of pinch-hitter Whitey Lockman between fly outs by third baseman Eddie Kasko and shortstop Roy McMillan. In the bottom of the frame, the Pirates concluded the day’s scoring with two more runs. Right-hander Raul Sanchez replaced Purkey on the mound to start the inning. Groat singled to right field for his third hit and moved to second when Sanchez walked Skinner. Stuart’s weak tap to Sanchez moved both runners up a base. Clemente drove them home with his third hit of the day, a single to right field. As his fourth and fifth RBIs crossed the plate, Clemente tried to stretch the hit into a double. Gonzalez threw a strike to second, where McMillan tagged out Clemente with his only blemish of the day. Burgess ended the inning with a fly to Pinson in center.

With a 13-0 score, Law had room to allow multiple hits at the start of the next two innings. To open the seventh, Pinson and Bell singled, but Robinson forced Pinson at third. Law then stranded both runners, retiring Gonzalez on a pop foul and Bailey on a soft fly to Stuart. Sanchez pitched a perfect seventh for the Reds.

The Reds opened the eighth, again with two more hits. Martin sliced his second double and Kasko beat out an infield single. Once more, Law left both runners on base by retiring the next three Reds in order. The Reds sent out right-hander Ted Wieand, in only his second major-league game, to pitch the Pirates eighth. The fifth pitcher of the game for the Reds, Wieand sandwiched a walk between two strikeouts before retiring the final Pirates batter, Stuart, on a fly ball to left field.

Joe Christopher replaced Skinner in left field for the Pirates to start the ninth inning. Law easily retired the Reds in order. Christopher, in his brief appearance, caught the final out that mercifully ended the historical thrashing. Despite the lengthy fireworks, it took only 2:13 for the teams to sweat through the tropical afternoon conditions.

At the time, it was only the Pirates’ fourth Opening Day shutout in the twentieth century. The 13 Pirates runs scored were the second-most for any Opening Day, trailing only the 14 tallied in 1892 and 1953. The 13-0 score remains, as of 2020, the largest margin of victory in a Pirates opener.8

The 1960 Pirates produced a memorable season for their fans. From the first to the final game, the team transformed the city. The Opening Day play of Groat, Law, Clemente, and Mazeroski previewed their success during the regular season. Groat went on to win the NL MVP Award and Law captured the Cy Young Award. Clemente enjoyed his breakout season, making his first of 15 All-Star Games, hitting .314, driving in 94 runs and posting a 121 OPS+. As for Mazeroski, his Opening Day home run over the scoreboard clock provided the best omen of all. History records a similar home run over Forbes Field’s 406-foot marker to end the 1960 World Series. That walk-off home run claimed the Pirates’ first World Series championship in 35 years and made Mazeroski a Pittsburgh legend every October 13 at 3:36 P.M.9

In addition to the sources cited in the Notes, the author consulted Baseball-Reference.com and Retrosheet.org for play-by-play information and statistics.

9 Kevin Kirkland, “Game 7 Gang Gathers Again Sunday,” Pittsburgh Post-Gazette, October 11, 2013: 33. See also Joe Capozzi, “Back to the Wall,” Palm Beach Post (West Palm Beach, Florida), October 13, 2000: 206. Each year, on October 13, Pirates fans meet at the remnants of the Forbes Field wall. At 1:00 P.M., organizers begin a loudspeaker recording of the entire game that ends with Mazeroski’s home run occurring at 3:36 P.M. It is a tradition that began slowly in 1985 by Saul Finkelstein and swelled to gatherings often over 1,000 each year.