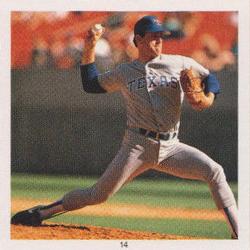 The outlook was not good for the Texas Rangers when they squared off against the Baltimore Orioles in the finale of an early-season three-game series at Arlington Stadium. Not only was Texas winless in four home games to start the season, the Rangers had yet to even have a lead while allowing first-inning runs in all four games.1

The Orioles shut out the Rangers 3-0 in the first game of the series; they torched Rangers pitching for 11 runs in the second game, led by Cal Ripken’s two homers and seven RBIs. The Rangers were hitting just .206 as a team and had managed only eight runs in four games, while being shut out twice so far.

Texas sent future Hall of Famer Nolan Ryan to the mound to stop the losing streak. The 44-year-old Ryan had not escaped the Rangers’ first-week struggles, allowing five earned runs in seven innings in his Opening Day start on April 8 against the Milwaukee Brewers. And he had not defeated Baltimore in almost 15 years, when he was a member of the California Angels.

It looked like more of the same for Ryan and the Rangers in the top of the first. After retiring the first two batters, Ryan walked Ripken and Glenn Davis and served up a three-run homer to designated hitter Sam Horn.

“I have nobody to blame but myself because I overthrew to two hitters and then didn’t keep my intensity up on Horn and I ended up getting us down 3-0,” Ryan said after the game.2

Horn, who had entered the game with a strikeout in each of his first six at-bats of the season, joked later, “So I figured I was just going to swing where he was throwing it.”3

The Rangers struck back in bottom of the inning against Baltimore starter Jeff Robinson, who was making his first start for them after being acquired in a January 11 trade with Detroit for Mickey Tettleton. Robinson’s appearance made him the 500th player to play for the Orioles since their arrival in Baltimore in 1953.4

Jeff Huson hit a one-out single and Rafael Palmeiro doubled on a fly to left to get Texas on the scoreboard. After Julio Franco walked with two outs, Kevin Reimer blasted a three-run homer to put the Rangers up 4-3. It was their first lead of the year.

“When they went ahead 3-0, my first thought was, oh, no, here we go again,” Palmeiro said later. “But my next thought was Nolan has given up some first-inning runs before, and then shut the other team down. That’s all they’re going to get, so we can come back. We got four in the bottom of the first, and that was all we needed.”5

After a perfect second inning, which included strikeouts of Ernie Whitt and Brady Anderson, Ryan ran into trouble in the third. With one out, Ripken walked and Davis singled. Horn smashed a hard grounder toward right field. Second baseman Julio Franco dove to his left and speared the ball on one hop. He fired to second base from his knees to start an inning-ending double play. From there, Ryan dominated the Orioles by retiring the next 12 batters, seven by strikeout.

Orioles manager Frank Robinson knew his team had missed their chance against Ryan. “In order to beat Nolan, you have to have a well-pitched game and you have to take advantage of the one or two opportunities he’s gonna give you in the game,” Robinson said after the game. “That’s how we have done it in the past, but not today.”6

When Joe Orsulak struck out swinging for the second out of the fourth, Ryan had pitched 5,000 innings in his 25-year career, making him just the 12th pitcher to reach the milestone.7

Meanwhile, Robinson did not record an out in the third. Palmeiro led off with a double. Ruben Sierra singled him home for a 5-3 Rangers lead. The Orioles changed pitchers, bringing in Paul Kilgus to replace Robinson.

The Rangers tacked on two runs against Kilgus in the fourth inning to extend their lead. After Steve Buechele was hit by a pitch, Brian Downing connected for his first homer as a Ranger. He had signed with the team as a free agent a day earlier, after being invited to the Texas spring-training camp in late March. Texas now led 7-3.

Jose Bautista relieved Kilgus in the sixth, and the Rangers put the game out of reach by scoring four earned runs in each of the next two innings to make the score 15-3.

Gary Pettis started the sixth-inning rally with a one-out double when Randy Milligan couldn’t make a sliding catch of his sinking liner to left. Downing, Palmeiro, and Franco each had run-scoring singles before Palmeiro scored the final run on a wild pitch.

Bautista was no better in the seventh. He gave up a double to Buechele and a walk to Pettis. Three consecutive run-scoring hits followed, including Palmeiro’s fourth hit of the game, which raised his batting average after five games to .524 (11-for-21).

Speaking of Bautista’s performance, Robinson said later, “He just made bad pitches, period! But I’m not going to panic.”8

Veteran reliever Rich “Goose” Gossage pitched the eighth inning in relief of Ryan. With one out he gave up a double to Anderson and a single to Milligan but struck out the next two batters.

Mike Jeffcoat started the ninth and with one out gave up a single and a walk before Whitt struck out for the fourth time. Jeff Russell took over and ended the game with his first pitch by getting Juan Bell to fly out to center field.

The win prevented the Rangers from matching the worst start in franchise history, set by the 1985 squad, which lost their first five games.9

The win was the 303rd of Ryan’s long career and raised his lifetime record against Baltimore to 6-16. It was his first victory against the Orioles since April 20, 1976. As an Angel that day, he hurled a complete-game shutout while striking out 12 and holding Baltimore to three singles. The singles came from the bottom two batters in the Baltimore lineup — one by legendary Hall of Fame third baseman Brooks Robinson and two by longtime shortstop Mark Belanger. Ryan was the only player from the game still active in the major leagues in 1991.

In 12 starts against Baltimore since his last victory against them, Ryan was 0-9 with a 5.42 ERA, including an 0-3 record with a 7.45 ERA in three starts since returning to the American League with Texas in 1989. He had spent 1980 to 1988 in the National League with the Houston Astros.

“As far as beating the Orioles, yeah, it’s a good feeling,” Ryan said. “It’s a good feeling to beat anybody. I think their ballclub always had real good pitching, they don’t give up a lot of runs and for some reason they were a ballclub I had trouble beating.”11

After snapping his long victory drought against the Orioles, Ryan would not wait long to defeat them again. In his next start Ryan gave up four hits in a 1-0 victory.

Beginning with his April 14 victory, Ryan pitched well against Baltimore in the final three years of his career, beating them more than any other team. From 1991 to 1993, he was 5-1 with a 3.40 ERA and 42 strikeouts in eight starts against the Orioles.

The author attended this game, driving alone from Little Rock to Arlington specifically for his first opportunity to see the legendary Nolan Ryan pitch in person. 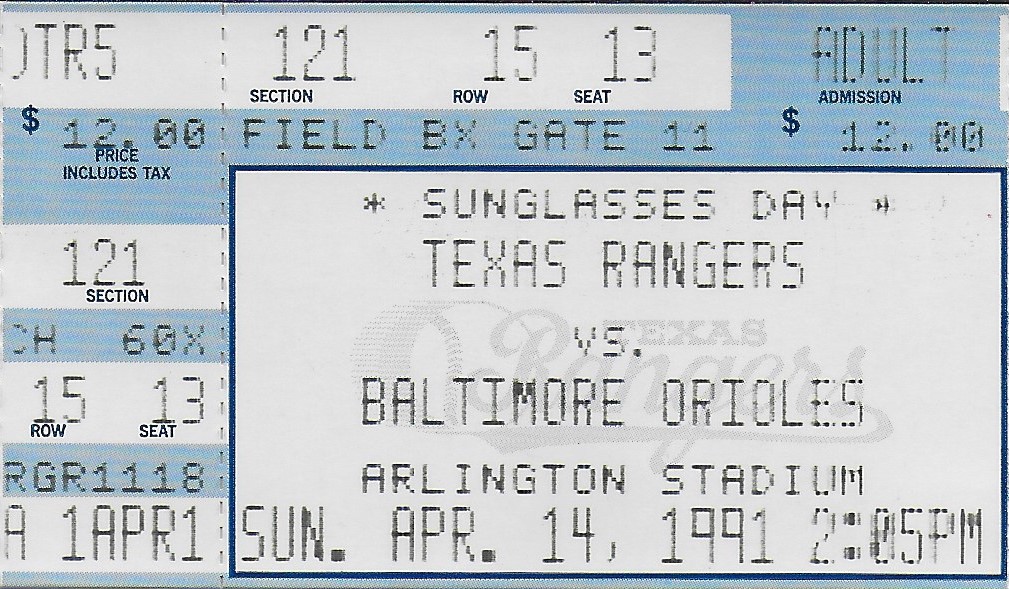 7 Newspaper sources list Nolan’s 5,000th inning as occurring in the third inning. Baseball-Reference has Ryan as having 4,989⅓ innings pitched entering the 1991 season. Adding the 7 innings from his first start in 1991 means he needed 11 outs (two outs in the fourth) in this game to get to 5,000.