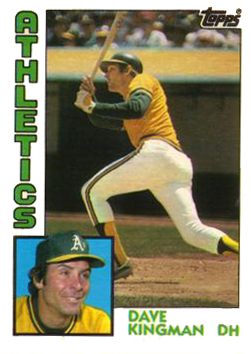 After 11 straight games at home to start the 1984 season, the Oakland A’s made their way to Seattle for the start of a nine-game road trip. The A’s had won seven games but were coming off a 12-8 loss to the California Angels the previous day. The Seattle Mariners were enjoying the best start in franchise history, having won seven of ten to open the season.

Both clubs were counting on promising young starters when they kicked off a three-game series in Seattle on Monday, April 16, 1984. Oakland starter Mike Warren was a hard-luck loser in each of his first two starts, as the A’s managed only two runs of offensive support. He had finished the previous season with four straight wins, including the 16th no-hitter by a rookie in his final start against the White Sox. Seattle starter Matt Young had made the American League All-Star team in 1983 as a rookie, while winning 11 games. He had allowed only two earned runs in 13 innings to start this season, with two straight wins. He was scheduled to face an inconsistent A’s club that had not yet managed to identify a reliable run-producer.

Young started well, striking out Oakland’s Rickey Henderson to begin the game. But he gave up consecutive singles to Joe Morgan, Davey Lopes, and Carney Lansford, loading the bases for designated hitter Dave Kingman. Kingman had been a spring-training invitee hoping to stick with the A’s after getting released by the New York Mets following a dismal year in 1983. Although he managed only one spring homer, the A’s hoped he might regain the stroke that had produced a National League-high 37 home runs just two seasons earlier. After quickly falling behind in the count, 0-and-2, Kingman deposited a hanging curveball from Young into the bleachers for his second home run of the young season and the 12th grand slam of his career. First baseman Bill Almon followed with a single, but was caught stealing on a strikeout pitch to outfielder, Dwayne Murphy.

Staked to a four-run lead, Mike Warren allowed one run on three hits in his first two innings of work. Young settled down for a one-two-three second inning, and then retired the first two Oakland batters in the third. He walked Lansford, and Kingman stepped in again with an opportunity to do more damage. “He’s a young pitcher and I knew he was going to challenge me with a strike,” Kingman said later. “Instinct tells you when a pitch is going to be near the plate.”1 Kingman hit his second homer of the game, a drive to the left-field bleachers that was ruled a homerun after a fan appeared to reach over the railing to touch it. “I made more mistakes to Kingman than I did to any other batter in my career,” Young said after the game. “He can be pitched to, but I got two pitches up in the strike zone.”2 It was the 38th multi-homer game of Kingman’s career.

The Mariners struck back for two runs in the bottom half of the fourth inning on singles by Al Cowens, Phil Bradley, and Bob Kearney and an error by Oakland first baseman Almon. With the score 6-3, Young took the hill to open the fifth inning against second baseman Joe Morgan, who had signed with Oakland as a free agent in December. Morgan unleashed a shot into the second deck in right field, his first American League home run, and his 261st as a second baseman, leaving him just three shy of Rogers Hornsby’s career mark for second sackers. Young then walked Lopes, picked him off first base, and issued another walk to Lansford. Seattle manager Del Crandall called upon lefty reliever Ed Vande Berg, who had yet to allow a run in seven appearances this season, to face Kingman.

Kingman proceeded to hit his third home run in as many at-bats, increasing Oakland’s lead to 9-3. It was the slugger’s fifth career three-homer game, leaving him just one shy of Johnny Mize’s record. His eight runs batted in were just two shy of Reggie Jackson’s club record of ten which he accomplished against the Boston Red Sox on June 14, 1969.

The score remained unchanged until Seattle plated two runs in the eighth inning on an RBI single by Spike Owen and a double by Barry Bonnell off Ray Burris, who had replaced Warren in the seventh. After a walk to left fielder Gorman Thomas, Oakland manager Steve Boros again turned to his bullpen.

Bill Caudill had saved 26 games in each of the previous two seasons as a Mariner. On November 21, 1983, he was traded with Darrel Akerfelds to the A’s for Dave Beard and Bob Kearney. Through his first five appearances with Oakland, he was credited with three wins while earning two saves. Brought in to replace Burris, he struck out designated hitter Pat Putnam to end the inning.

The heart of the Oakland order was scheduled to lead off the ninth inning. Seattle reliever Paul Mirabella surrendered a leadoff single to Davey Lopes, and Carney Lansford reached on an error. Dave Kingman stepped to the plate with an opportunity to become just the 11th major leaguer to hit four home runs in a game. But he was retired on a weak popup to shortstop. Mirabella then struck out Bill Almon, but walked Dwayne Murphy to load the bases, prompting Crandall to bring in Mike Stanton, who got catcher Mike Heath to fly out to center field.

With Oakland leading 9-5 and Caudill on the hill to preserve the win, rookie Seattle first baseman Alvin Davis stepped to the plate. Davis had been called up from Triple-A Salt Lake City to replace Ken Phelps, who had broken a finger. Debuting against the Boston Red Sox on April 11, Davis had recorded a hit in each of his first four games, including two home runs. He greeted Caudill with his third homer, giving him five runs batted in and four runs scored through his first five games. Caudill recorded a fly-ball out before yielding a single to Phil Bradley, but recovered to strikeout Orlando Mercado and induce Spike Owen to fly out, ending the game. It was Caudill’s third save of the season, and Mike Warren’s first win. Of the 11 runs Oakland had scored in Warren’s three starts, 10 were the result of four homers off the bat of Dave Kingman.

Players on both clubs went on to have memorable seasons in 1984. For Seattle, Alvin Davis proved to be the franchise’s first home-grown star. He garnered Rookie of the Year honors, made the American League All-Star team, and finished 12th in voting for the Most Valuable Player. Davis and teammate and Mark Langston, the Rookie of the Year runner-up, generated an excitement among the fan base in Seattle that had never before existed.

For Oakland, Caudill went on to an All-Star season and a career-high 36 saves, second among relievers in the American League. In Dave Kingman, the Oakland A’s found a drawing card. On the remainder of the nine-game road trip, he drove in 11 runs on the strength of five more home runs, including two against Boston on April 22 and two against the Toronto Blue Jays on April 26. He received Player of the Week honors for the week ended April 22, and went on to have one of his most productive seasons, culminating in American League Comeback Player of the Year honors.

When Oakland left town, Mariners president Chuck Armstrong made the unusual move of roping off the first two rows in the Seattle Kingdome’s left-field general admission bleachers. “We’re the only park in the American League where (fans) lean over like that. I don’t want it costing us a ballgame,” he said.3 It was a decision Armstrong arrived at with Kingman’s performance fresh in mind.

(Stats for the game were found at baseball-reference.com.)