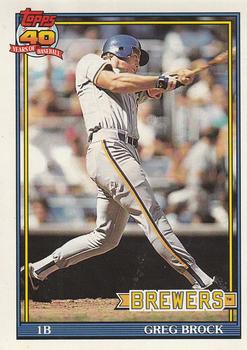 The Boston Red Sox began their 1990 campaign by winning three out of four games at Fenway Park against the Detroit Tigers. The Milwaukee Brewers then came to town, winning 9-5 on Friday, April 13, and losing a squeaker, 4-3, on Saturday. Sunday was an offday in advance of the traditional morning start on Patriots Day. The 11:06 A.M. start was timed to have the game end about the time Boston Marathon runners were passing through nearby Kenmore Square.

The 18-0 drubbing the Brewers gave the hometown team made for a disappointing Patriots Day for Red Sox fans. The Red Sox left for Chicago and lost 2-1 to the White Sox on April 17. Eventually they found their offense and righted their season.

Led by a pitching staff of Roger Clemens, Mike Boddicker, and Tom Bolton and five batters in the usual lineup hitting .287 or better, the Red Sox were good at producing and preventing runs. They scored 699 runs and gave up 664, yielding a Pythagorean prediction of 85 wins, three games less than their actual record.

On April 16 Mike Boddicker took the mound for the Red Sox with Teddy Higuera pitching for the visiting Brewers. The game took 3:14 to complete, a function of the offensive explosion of the Brewers.

After a scoreless first inning, the Brewers erupted for four runs in top of the second. Dave Parker doubled and scored on another double by Greg Brock. A walk to Edgar Diaz and an HBP on Dale Sveum loaded the bases. Mike Felder hit a bunt single to plate Brock and Gary Sheffield got a ground-rule double to score two more.

Boston went meekly in the bottom of the second and the Brewers resumed their hitting in the top of the third. Boddicker was removed after 2⅓ innings after giving up a single to Parker and another double to Brock. Dennis Lamp walked Greg Vaughn to load the bases and two runs scored on a single by Edgar Diaz.

A 6-0 score was looking pretty safe but the Brewers continued scoring in the top of the fourth inning. A walk to B.J. Surhoff, a double by Parker, a single by Brock, and a double by Vaughn tacked three more runs onto the lead and sent Lamp to the showers.

Dana Kiecker quieted the Brewer bats through the fifth inning but Higuera was masterful against the Red Sox, giving up only two hits in his 6⅓-inning stint.

The Brewers figured Kiecker out in the sixth inning. Surhoff reached on an error, Robin Yount was hit by a pitch, and Surhoff scored on Dave Parker’s third double of the day. Brock singled Yount home. Glenn Braggs ran for Parker and scored on a double by Vaughn to make four runs in the inning.

The seventh inning was scoreless. With the game well in hand, Higuera was pulled after one out in the seventh.

Milwaukee added five more runs in the top of the eighth to complete the scoring for the day. Vaughn and Diaz each singled and moved up a base on a wild pitch by pitcher Mike Rochford. A walk to Sveum loaded the bases and Vaughn scored on a sacrifice fly by Mike Felder. Sheffield doubled in Diaz, and then two more runs scored on Surhoff’s triple. A single by Darryl Hamilton plated Surhoff for the final run of the day.

The Brewers finished the day with 18 runs and 20 hits but not a single home run, leading to caustic comments directed at the home team in the Boston Globe. “This was no ordinary mugging,” wrote Larry Whiteside. “It was one of total embarrassment … the worst Red Sox shutout loss in 35 years.”1 Milwaukee had nine doubles and a triple in the game to keep the line moving. Milwaukee was very efficient, leaving only nine men on base.

The Red Sox’ performance disappointed the Patriots Day crowd. The Red Sox managed only three hits and four walks. They left seven men on base. In their three losses to date, the Red Sox had given up 38 runs on 45 hits, leading to skepticism about the strength of their starting pitching.2 The beatdown was the worst shutout loss for the Red Sox in 35 years.3

Terry Francona replaced Greg Vaughn at first base late in the game. Who would have suspected that Francona would become a Red Sox icon starting in 2004, when he steered the team to its first World Series championship since 1918?

The Red Sox met the same fate they did in 1988, losing to the Oakland A’s (103-59) in the American League Championship Series. Still, it was a successful season. The Red Sox were scarcely bothered by the Patriots Day slaughter.

In addition to the sources cited in the Notes, the author relied on both Retrosheet.org and Baseball-Reference.com.