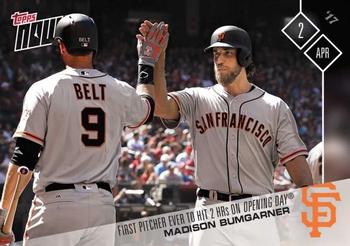 On April 2, 2017, the Giants and the Diamondbacks met on Opening Day at Chase Field in Phoenix. The 49,016 in attendance saw a glamorous pitching matchup of postseason stalwart Madison Bumgarner for the visitors and 2009 Cy Young Award winner Zack Greinke for the home team.

The game delivered more than the Mad Bum-Greinke matchup. There was a sustained attempt at a perfect game. Two home runs were hit by one of the starting pitchers. The game ended on a walk-off single by the home team and an initial victory was earned for the Diamondbacks’ new manager, Torey Lovullo.

Meanwhile, the Giants pitching staff declined. The team ERA increased from 3.65 to 4.50. A few weeks after the opener, Madison Bumgarner injured his shoulder in a dirt-bike accident in Colorado.2 He did not pitch for the Giants in 2017 from April 20 to July 14.

Although the injury would soon derail his season, Bumgarner was terrific on April 2. He struck out the side in the second inning. He dotted the scorecard with strikeouts and groundballs through five innings. The only hard contact Arizona made came in the form of four deep fly balls, all of them for outs, struck by Jeff Mathis, AJ Pollack, Greinke, and Paul Goldschmidt. Bumgarner was perfect through five.

By the time Bumgarner walked to the mound for the bottom of the sixth inning, he was sitting pretty with a 3-0 lead. His teammates had scored single runs off Greinke in the second and off reliever Tom Wilhelmsen in the sixth inning. (Lovullo removed Greinke after five innings and 92 pitches.) Eduardo Nune zwas involved in both runs, scoring on Joe Panik’s fly ball in the second and singling in Brandon Crawford in the top of the sixth.

Bumgarner created the third run by himself in the fifth inning when he drove a 1-and-2 Greinke pitch over the wall in left-center. The ball left his bat at 112 miles per hour, the fastest ever to come off a pitcher’s bat in the two years that such data had been tracked.3 This was his 15th career home run, moving him a notch up the list of elite slugging pitchers.4 As he started to hurl in the bottom of the sixth, Madison appeared to be having a career day with one dinger and a perfect game in progress.

But the bottom of the sixth inning did not go well for him. After striking out David Peralta, he gave up a triple to Arizona catcher Jeff Mathis. Nick Ahmed then singled in Mathis, and A.J. Pollack crushed an 0-and-1 pitch out of Chase Field in left-center field. The score was tied, 3-3 after six innings.

The very next inning, with one out in the top of the seventh, Bumgarner burnished his pitcher-as-slugger profile again by smashing Andrew Chafin’s 2-and-0 offering out of the park with a deep drive down the left-field line. Again the ball left his bat at 112 miles per hour.5 Bumgarner’s 16th career round-tripper put the Giants back on top, 4-3. The lead did not last.

Bumgarner came out of the game after pitching a scoreless seventh despite yielding two singles. J.J. Hoover threw a scoreless frame for the Diamondbacks in the top of the eighth. The Giants bullpen then took a shot at preserving Bumgarner’s 4-3 lead.

In the bottom of the eighth, the Giants’ bullpen was feckless. Reliever Derek Law gave up three straight singles, the last by Goldschmidt, driving in Pollock. The score was tied, 4-4.

The game was promptly untied by the Giants in the top of the ninth inning as Arizona reliever Fernando Rodney yielded a triple to Panik and an RBI lineout to Conor Gillaspie. Rodney also walked two batters and uncorked two wild pitches but fortunately for the Diamondbacks, the Giants plated only a single run. The score was 5-4, Giants ahead, as the bottom of the ninth inning began and Giants closer Mark Melancon entered the game.

Melancon came to the Giants to fill the role of closer vacated by the departed Santiago Casilla. Melancon signed a $57 million, four-year contract with the Giants. He was coming off a superb 2016 in which he logged a 1.64 ERA and 47 saves.

Melancon had a chance to preserve a close win. Initially he was on his game. He retired the first two Arizona batters in the bottom of the ninth with a strikeout and a groundball. Then he came apart quickly. Mathis smacked a pitch from Melancon for a double, his third hit of the day. Daniel Descalso, pinch-hitting for Rodney, singled in Jeremy Hazelbaker, who ran for Mathis. The RBI tied the score, 5-5.

Zack Greinke made the All-Star team for the fourth time, went 17-7 with a 3.20 ERA, and earned his fourth Gold Glove. Goldschmidt, Jake Lamb, and Robby Ray joined Zack on the All-Star team. Torey Lovullo was voted the 2017 NL Manager of the Year. The Diamondbacks lost to the Dodgers in the NLDS, three games to none.

Buster Posey was the Giants’ sole All Star.

Madison Bumgarner won four games in 2017. He missed half of the season because of the dirt-bike accident and recorded a respectable 3.32 ERA despite it.

On this day Mad Bum was a magnificent pitcher and a slugger. After the game Greinke reflected on Bumgarner’s two-home-run performance. “It was amazing. I wish I could have a game like that.”6 Oddly enough, two years later to the day, he did.7

In addition to the sources cited in the notes, the author consulted Baseball-Reference.com and Retrosheet.org.

1 As measured by WAR. They had the highest individual WAR among Diamondbacks pitchers in 2017, according to baseballreference.com.

4 The home run moved Bumgarner out of a tie for 19th place with Freddie Fitzsimmons and Babe Ruth for the most home runs hit as a pitcher. baseball-reference.com/bullpen/MLB_all-time_leaders_in_home_runs_by_pitchers.

7 See the game of April 2, 2019, when Greinke hit two home runs against the San Diego Padres at Petco Park. baseball-reference.com/boxes/SDN/SDN201904020.shtml.