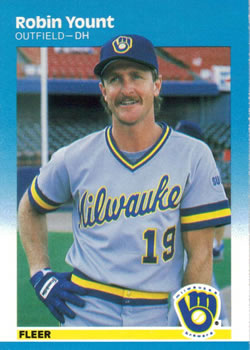 As they made their way down I-94 to Comiskey Park for this Monday night game, the 12-0 Milwaukee Brewers and their fans were in a celebratory mood after their dramatic win on Sunday against the Texas Rangers at Milwaukee County Stadium. Yes, they were still one game shy of tying the major-league record set by the 1982 Atlanta Braves for the most consecutive wins at the beginning of a season. But the manner of that victory ensured its place forever in Brewer history to be called merely “Easter Sunday 1987.”1

Was the 11-game winning streak doomed as the Brewers batted in the bottom of the ninth inning trailing 4-1? No. With one out and two runners on base, Rob Deer hit his second home run of the game to tie the score at 4-4. But that wasn’t enough drama. With two outs, Jim Gantner walked and Dale Sveum hit a walk-off home run off Greg Harris to secure the improbable 6-4 win and ensure that the winning streak was going to Chicago.

There was another reason for Brewers fans to celebrate. In 1948, George Webb, a baseball fan, opened a lunch counter in Milwaukee and predicted that the American Association’s Milwaukee Brewers would win 17 straight games. When the Boston Braves moved to Milwaukee in 1953, George Webb Restaurants predicted a 12-game winning streak at some time in the future without ever actually promising a celebratory gesture when the feat was accomplished. When it finally happened, on Easter Sunday 1987, the chain of 42 restaurants delivered on its “promise” by handing out 168,194 free hamburgers across Wisconsin on April 22, despite miserable weather in Milwaukee.2

The Brewers brought their 12-0 record into Comiskey Park for this Easter Monday night game. Five years earlier, Comiskey Park witnessed a more modest season-opening winning streak of eight games by the home team in their sweep of the Yankees, Red Sox, and Orioles to start the season. Recent success as Comiskey Park visitors also came with the Brewers. The White Sox had last won a series against the visiting Brewers in 1984, and their record against Milwaukee at home stood at 5-13 in the past three years.

The game also got the attention of the media around the country, including Atlanta, Los Angeles, Detroit, Baltimore, New York, and elsewhere. The Chicago Tribune reported that the White Sox had received 97 additional requests for media credentials on Monday morning, creating a World Series-like atmosphere.3 Comiskey Park hadn’t seen this intensity level since the 1983 playoffs when the Baltimore Orioles beat the White Sox in the ALCS.4

As 24,019 fans settled in for the game, it was evident that Comiskey Park, home for the Chicago White Sox since 1910, was showing its wear.5 The lower deck in right field remained closed while repairs were in progress on the underside of the upper deck.6 In the second inning of the White Sox home opener against the Detroit Tigers on April 10, a chunk of concrete had fallen from the upper deck into Section 103 of the lower stands.7 A second piece of concrete fell later in that game and sections remained closed to fans until repairs were completed.

Pitching-wise, the White Sox seemed well prepared for the Brewers. In two starts, Jose DeLeon had already accounted for two of the four White Sox victories in the young season. In fact, he yielded no runs and only four hits in 14⅓ innings of work in road victories at Kansas City and Toronto. He was matched against Juan Nieves. In his previous start, on April 15, Nieves no-hit the Baltimore Orioles 7-0, despite, by his own admission, a “mediocre fastball and an awful slider”8 in the early going. His strong finish would have gone for naught except for Robin Yount’s diving catch of a line drive to right-center field off the bat of Eddie Murray with two outs in the bottom of the ninth inning.

The Brewers got off to a quick 2-0 start in the first inning against Jose DeLeon with Greg Brock’s home run scoring Paul Molitor, who had doubled. In the White Sox first, any notion that Nieves would duplicate Johnny Vander Meer’s feat of consecutive no-hitters in 1938 was quickly dispelled. Gary Redus lined a single to left field on Nieves’ first pitch in the bottom of the first and eventually scored on Carlton Fisk’s single to center field to cut the Brewers early lead to 2-1.

The Brewers added a run in the second inning when Dale Sveum’s two-out double to right field scored Bill Schroeder, who had also doubled to right. Nieves struggled in the bottom of the second and didn’t help his own cause in the field. After one-out singles by Fred Manrique and Ozzie Guillen, Nieves threw a sure double-play grounder into center field, allowing Manrique to score. A single by Redus scored Guillen and the score was tied at 3-3.

Nieves settled down a bit, but couldn’t get out of the fifth inning by his own undoing. Ivan Calderon doubled to center field and scored on consecutive groundouts by Fisk and Greg Walker for a 4-3 White Sox lead. A double by Tim Hulett, an intentional walk to Manrique, and another error by Nieves loaded the bases and ended his night, replaced by Chuck Crim, who struck out Ron Karkovice. Crim not only got the Brewers out of that jam, he gave up only a harmless single to Jerry Hairston in another three innings of work.

Meanwhile, the Brewers rallied for two runs in the seventh inning to take a 5-4 lead. DeLeon walked Bill Schroeder. When Paul Molitor’s double scored pinch-runner B.J. Surhoff to tie the game, White Sox manager Jim Fregosi called on relief pitcher Bobby Thigpen. But Robin Yount’s single to right scored Molitor and the Brewers had the lead for good, 5-4. Brewers southpaw closer Dan Plesac gave up a leadoff single to Jerry Royster in the ninth inning. But two strikeouts and a flyball secured his fifth save of the young season and the Brewers were 13-0 to start the season, just like the 1982 Atlanta Braves. Sometime after the game, the Brewers manager, Tom Trebelhorn, was asked how he could bring in a lefty to face three right-handed hitters. His answer was simple: “I told them that if a guy can throw 94 mph, as Danny can, then it really doesn’t matter which arm he uses.”9

What Comiskey Park gave the Brewers on this night, it took away on the very next night. Joel Davis pitched for the White Sox while Mark Ciardi started for the Brewers. Davis got the call because of an injury to starting pitcher Neil Allen.10 Ciardi in his rookie season had won the eighth game of the winning streak by going five innings and beating Baltimore, 7-4. Ciardi didn’t make it out of the third inning as the White Sox took a 5-0 lead that included a first-inning home run by Donnie Hill. After a not-so-impressive first start of the season, Davis held the Brewers to four hits and no runs in 5⅓ innings of work to record the win in the 7-1 White Sox victory.

The record-tying winning streak was over! The Brewers bounced back in the next week to win four games in a row for a 17-1 record, but their early-season lead in the American League’s East Division was only 3½ games over the 14-5 second place Yankees on April 27. That season-opening start enabled the Brewers to beat the 16-1 getaway of the 1984 Detroit Tigers, who won 35 of their first 40 games en route to a World Series win.

The Brewers lost their grip on first place on May 14 amid a 12-game losing streak and finished the season in third place in the American League’s East Division with a 91-71 record, seven games behind the Detroit Tigers. Recapturing the glory of five years earlier in winning the 1982 American League title was not to be. Nonetheless, the importance of the 13-0 streak was not to be lost on the players. Their sentiment was best expressed by their 23-year-old shortstop and future manager, Dale Sveum: “Those were the funnest 13 days of my life.”11

2 “A blast from Brewers History: Easter Sunday ’87,” OnMilwaukee.com, April 8, 2007, accessed September 24, 2017, onmilwaukee.com/sports/articles/brewerseaster87.html. Note: The rainy weather in the Midwest was enough to cause the postponement of the third game in the White Sox-Brewers series at Comiskey Park on that day.

5 The author settled into his seat in Section 118 without the fear that crumbling concrete might distract from the enjoyment of this record-matching game.

9 Dave Nightingale, “Funnest Days for Brewers, Milwaukee’s Streakers Warm Up to Spring,” The Sporting News, May 4, 1987: 18.