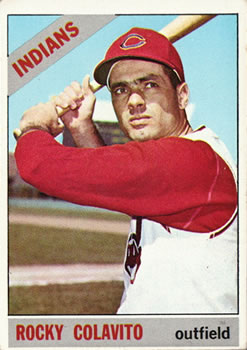 The largest Opening Day crowd in 1965 poured into cavernous Municipal Stadium on April 21, 1965, to see the return of Rocky Colavito in what the Cleveland Press dubbed “Welcome Back Rocky Day.” After a five-year absence, Colavito, one of the franchise’s most popular players and greatest home run hitters, was back in a Cleveland Indians uniform.

The team had been in a state of free-fall since it traded Colavito, who had tied for the home-run crown in 1959 with 42 homers, including four in one game, to the Detroit Tigers on April 17, 1960, for batting champ Harvey Kuenn. It was one of baseball’s most controversial trades of all time, and Cleveland fans were devastated at the loss of “The Rock,” who at age 26 was just coming into his own as an American League star.

They were jubilant when the February 1965 three-way trade bringing Colavito back to Cleveland was announced in the offseason, and the Indians were counting on his presence to turn things around on the field and at the turnstiles. The Indians gave up a lot to get Colavito, sending away budding pitcher Tommy John, who went on to win 286 of his 288 victories after the trade; outfielder Tommie Agee, the AL Rookie of the Year the following season; and starting catcher John Romano. But Colavito, playing the year before in Kansas City, hit .274 with 34 home runs and 102 RBIs while becoming the fifth-quickest batter, based on career at-bats, to reach 300 home runs.

Home attendance had increased by over 834,000 in the slugger’s last season in Cleveland. His popularity also helped Cleveland retain its franchise in 1959 when the team’s ownership was considering relocating to another city.1 But fans abandoned the Indians in droves after Colavito was traded to the Tigers. Attendance plummeted by almost 550,000 the next season and continued to sink like the Titanic. There were only 653,293 fans in 1964, fewer than those who attended the nine NFL Cleveland Browns home games. Now, with talk once again of the franchise moving, Colavito was being called on to do it again. “We needed Colavito to save the franchise,” general manager Gabe Paul said.2

The Indians began the 1965 season dropping three of their first four games. That made little difference to the exuberant crowd at Municipal Stadium, who cheered loudly for their home team and let Colavito know how much it meant to them to have him back in an Indians uniform. It meant a lot to the Indians right fielder, too. “The return to Cleveland was a fantastic day, a beautiful day,” Colavito said. “The fans went bananas. They brought banners that hung from the stands saying things like, ‘Welcome back, Rocky.’ There were standing ovations, and it was very, very heartwarming.”3 Colavito even posed before the game with Frank Lane, the general manager who traded him away five years earlier. Lane presented a fruit basket to make light of a dismissive “fruit peddler” remark he had once said about Colavito.4

Starting for the Indians was Sam McDowell, who went 11-6 in 1964 but would have a breakout year in 1965, going 17-11with a sterling 2.18 ERA and 325 strikeouts. Opposing him on the mound was Fred Newman, who had gone 13-10 the previous season. The Angels scored first in the top of the second inning, when right fielder Lou Clinton doubled and scored on third baseman Paul Schaal’s single up the middle. Colavito came up for the first time in the bottom of the inning to a loud ovation before lofting a fly ball to left fielder Willie Smith. The Angels increased their lead to 2-0 in the top of the fourth inning on a run-scoring single by Clinton that scored shortstop Jim Fregosi, who led off with a single. But the Indians quickly knotted the score at 2-2 when first baseman Chuck Hinton reached on a single and left fielder Leon Wagner sliced a home run to left. That’s where the score remained until the bottom of the seventh inning, when Colavito, who had popped up to Angels second baseman Bobby Knoop in his second at-bat, stepped into the batter’s box with Wagner on first and drove a pitch over the fence in left, giving the Indians a 4-2 lead and sending the crowd into delirium.

“Rocky’s two-run homer in the sixth inning shook the ballpark like it hasn’t been shaken in years,” a press account said.5 Here’s how Bob Sudyk writing in Sport magazine described the effect Colavito’s blast had on the crowd: “As the ball landed in the left-field stands 400 feet from home plate, Rocky jogged around the bases. Down from the stands swept the mammoth roar from 44,335 fans. Rocky pulled hard at the peak of his cap several times in humble thanks. Then he was swallowed up in a mob of his teammates in the dugout. When the inning ended, he burst out of the dugout in his customary headlong dash for his right-field position. The entire crowd joined in a standing ovation that made the hair stand on end on the necks of the most cynical members of the audience. … He had single-handedly brought the game into the heart of a city that seemingly had lost all feeling for baseball. … Seldom has a professional athlete and a city wanted and needed each other so much.”6

The Angels came back in the top of the ninth inning to score three runs and take the lead on pinch-hit singles by Buck Rodgers and Albie Pearson before pitchers Don McMahon and Luis Tiant were summoned to get the third out. The Indians bounced back to tie the game in the bottom of the inning on a pinch-hit single by Joe Azcue. Sonny Siebert, the Indians’ fourth pitcher of the evening, retired the Angels in the top of the 10th inning, and Wagner ended the game by launching a home run off Angels pitcher Ron Piche, his second blast of the game, for a 6-5 Indians victory.

It was a terrific Opening Day performance for Wagner, and a wonderful return for Colavito. “I’ve thought about this day for a long time – a long time,” Colavito said. “When you come back after all these years, and before so many wonderful people, you wouldn’t be human if it wasn’t special. I would say it was one of the most memorable home runs in my career. What made everything perfect was that we won. I’ll always remember this game.”7 Afterward, Wagner said, “I almost would feel bad about hitting those home runs if Rocky doesn’t get one, too. He’s one of the nicest guys I’ve met. Now I understand why all the fans here like him so well and wanted him back.”8

Opening Day reviews overflowed with excitement over Colavito’s return and hope for the team’s future. “The greatest move Gabe Paul ever made to prove his desire to stay in Cleveland was to bring Colavito back where he belongs,” one reporter wrote.9 An accompanying photo showed Colavito about to step on home plate after hitting the home run, under the headline, “Rocky’s Home Again.” A Cleveland Plain Dealer editorial also celebrated the Indians’ large turnout and Colavito’s return: “They saved their loudest, heartiest cheers for an old hero now back in local uniform, Rocky Colavito.”10

Colavito went on to have an outstanding season with the Indians, batting .287 with a league-leading 108 RBIs and 26 round-trippers, fifth most in the league. He was first in walks, second in on-base percentage, third in hits, fourth in total bases, and fifth in runs scored. He was named a starter in the 1965 All-Star Game, went errorless in all 162 games, the first American League player to do so, and finished fifth in voting for the Most Valuable Player Award.

The Indians finished with 87 wins and 75 losses, their best season since Colavito’s 1959 season with them, and the team’s best record from 1960 to the strike-shortened season of 1994. Bringing Colavito back worked: The fans returned to the ballpark in numbers not seen since the 1960 trade, and discussions to move the franchise were laid to rest.

Most of the research occurred between 2017 and 2018 for my book, Rocky Colavito: Cleveland’s Iconic Slugger (McFarland & Company), published in June 2019.

In addition to the sources cited in the Notes, the author accessed Baseball-Reference.com, Retrosheet.org, backtobaseball.com, and Baseball-Almanac.com for box scores, play-by-play information, and other data.