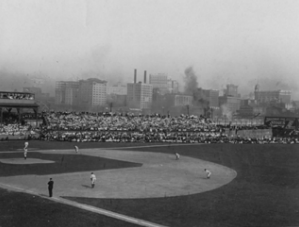 Surely, preparation would not be an issue for Pittsburgh’s 1891 National League campaign. The club spent two months training in the South, getting in shape for the new season. The new manager was also familiar to the squad. Still an active player, Ned Hanlon was in the nascent stages of a managerial career that would generate five NL pennants with the Baltimore Orioles and Brooklyn Superbas over the next decade. Hanlon had skippered the Pittsburgh Alleghenys for the final third of the 1889 season before joining the city’s Players League entry, the Burghers, the following year. With the Players League defunct after one season, he now returned to pilot the NL team and, as a player, remained “admired by all and stands among the leading centerfielders of the country.”1

Depleted by the Brotherhood war,2 Pittsburgh finished the 1890 NL campaign dead last at 23-113. Expectations were high for the much-changed team heading into the April 22, 1891, season opener against Chicago. Among the changes, Pittsburgh was commonly referred as the Pirates. Hanlon predicted a first- or second-place finish based on the quality of players assembled in the offseason.3

Pete Browning joined Pittsburgh after eight years with Louisville in the American Association and a stint with Cleveland’s PL club. Browning was deemed “a terror to all pitchers, good, bad and indifferent and their hearts quiver whenever they see his lengthy form towering over the plate.”4 Charley Reilly moved over from the AA Columbus Solons and was viewed as “a young man full of ambition, [who] will play every point to win.”5 Connie Mack, formerly with Washington’s NL club and a member of the PL Buffalo Bisons, gave Pittsburgh a top backstop who “did great work and was admired by everybody.”6

Lou Bierbauer signed with Pittsburgh after playing with John Montgomery Ward’s PL club in Brooklyn. Hanlon was thought to have “made a ten-strike”7 in landing Bierbauer. A player who “hits like a Trojan and fields with consummate skill,”8 Bierbauer would man second base for Pittsburgh. Chicago player-manager Cap Anson shared the optimism about Pittsburgh, remarking, “Captain Hanlon has spent a barrel of money and has what you might call an all-star aggregation. … Pittsburg has corralled some of the champion hitters of the country.”9

There was a festive atmosphere around Exposition Park ahead of the 3:30 P.M. first pitch. The grounds were in good shape after a large group of workers spent the prior day on preparations.10 Fans crowded into the vicinity for the Opening Day parade as “[t]he band played and the base-ball season was inaugurated with a grand street pageant.”11 The joyous mood dampened briefly when storms rolled through, but “[w]hen the clouds broke and the sun showed a winning hand there was a yell of satisfaction.”12 The rain was thought to have limited the eventual 5,263 attendance, but fans purchased tickets despite the weather.

Chicago arrived by train the morning of the game. Anson’s club also entered the season with high expectations. The Chicago Tribune called the team “as evenly balanced a ball club as ever stepped on the field, and its discipline is almost perfect.”13 For the opener, the Colts were weakened by the absence of Tom Burns, who was laid up with an injured arm;14 Bill Dahlen, at 21, would make his major-league debut filling in for Burns at third base. Anson trusted the pitching to another freshman, 22-year-old Pat Luby. Because Luby “pitches in a way that proves very painful to most batsmen,”15 the move may have been viewed as a good one.

Though playing at home, Pittsburgh batted first. Fans greeted Doggie Miller16 with enthusiastic cheers as he approached the plate, an act that would be repeated for the rest of the home team’s lineup. Luby allowed a leadoff walk to Miller, but his teammates could not bring him home. Chicago scored in the bottom of the first, when Anson’s double brought Dahlen across the plate in his first major-league inning. Chicago added gradually to its lead. The Colts scored another run in the second inning when Fred Pfeffer worked his way around the bases after a leadoff walk. The visitors got two more in the fourth inning to take a 4-0 lead. In fielding a groundball off Cliff Carroll’s bat, Reilly belied his strong reputation playing third base by throwing wildly to first. Carroll landed at third base by the end of the play. Pfeffer brought him home with a single to center field. Three batters later, Elmer Foster singled to score Pfeffer.

By the seventh inning, Pittsburgh still trailed 4-0 and the Pirates partisans despaired. “Everybody had given up hope of scoring a run, to say nothing of winning the game,” wrote one of the local papers.17 After holding Pittsburgh scoreless through six innings, Luby unraveled. He hit leadoff batter Mack in the shoulder and followed that with four bad throws to put Reilly on base. Pitcher Pud Galvin “rapped out a clear single”18 to load the bases. At this point, “Luby evidently feared the consequences of pitching over the plate”19 and walked Miller on four pitches, which scored Mack. Luby surrendered another walk to Jake Beckley, which scored Reilly. With his pitcher “wild as a March hare,”20 Anson tried to calm Luby. His words did not have the desired effect as Luby walked Fred Carroll, thereby scoring Galvin. With Pittsburgh now within one run, Anson called upon Bill Hutchinson to stem the tide.

Swapping pitchers did not stop the momentum, however. Browning’s sharply hit single to center field scored Miller to tie the game, 4-4. The bases remained loaded and there were still no outs. Bierbauer’s hit to Dahlen was collected by the Colts third baseman, who threw home to force Beckley. Hanlon’s drive into the outfield grass brought home Carroll and Browning, putting Pittsburgh ahead 6-4. “Pandemonium reigned in grand stand and bleachers. Two runs ahead was a cyclonic surprise,” a Pittsburgh sportswriter rhapsodized.21 Though dejected after the disastrous seventh, Chicago halved the deficit in the bottom of the inning. Hutchinson flied out to Browning in left-field foul territory and Malachi Kittridge grounded out to Miller at shortstop, but Foster started a two-out rally by reaching first after Miller bobbled a groundball. Jimmy Ryan uncorked a long double into center field that scored Foster. Jimmy Cooney struck out to end the frame but Chicago had pulled within one run.

Neither club scored in the eighth, but Chicago came close. With one out and Dahlen on third base, Cliff Carroll sent a high fly toward Fred Carroll (no relation) in right field. Dahlen neglected to take a chance on scoring, and would not make it home that inning. Pittsburgh did not add to its lead in the top of the ninth. Nonetheless, sensing victory, “the Pittsburgers put on their coats, and with a smile of satisfaction prepared to leave the grounds.”22 Chicago would provide reason for them to stay. Hutchinson sent a high fly to Fred Carroll, but the right fielder misjudged the ball and muffed the catch. With Hutchinson on second, Kittridge brought home his batterymate by singling to left field. The game now tied, 6-6, the Exposition Park crowd “resumed their seats with a thud that shook the stand.”23 Chicago would not find the winning run in the bottom of the ninth, and the season opener headed into extra innings.

Only the 10th inning would be required to settle the matter. The Pirates’ Mack and Reilly began the top of the inning by striking out, adding to the anxiety in the grandstand. Galvin singled to keep the inning going, and Miller followed by drawing a walk from Hutchinson. The rally ended with Fred Carroll’s fly out to Cliff Carroll in right field. In Chicago’s half of the inning, Dahlen smacked the ball down the left-field line, almost reaching the outfield fence, and Dahlen was safe at third as a “sickening chill spread through the stands.”24 Anson popped up to shortstop Miller, and Dahlen held third. He would not need to do so when Cliff Carroll drove the ball to left-center, allowing Dahlen to score the winning run. Chicago 7, Pittsburgh 6.

Despite the loss, the local newspaper observed some reason for optimism: “While they show a lack of team work, still there is evidence that this will be remedied in a game or two. …”25 In truth, the optimism proved unjustified. Although Pittsburgh’s record was above .500 at the beginning of June, the team finished 55-80, placing it in the same spot as the season before: last place in the National League.

2 For information about the “Brotherhood War” related to the formation of the Players League, see, e.g., https://baseball-reference.com/bullpen/Players_League.

16 Miller was referred as “Kid Miller” in a season preview article in the Pittsburgh Commercial Gazette. “About the Boys.”