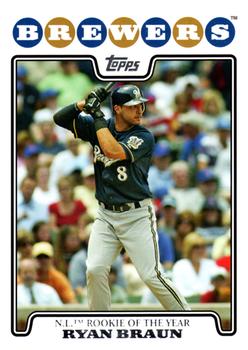 “Now that was something else,” Milwaukee manager Ken Macha exclaimed after the Brewers set a team mark for the most runs while shutting out an opponent.1 While certainly not the largest blowout in major-league history, the Brewers’ 20-run victory margin tied the previous team mark, set on August 8, 1992, in a 22-2 win against the Toronto Blue Jays. The biggest major-league win in modern times was the 30-3 walloping the Texas Rangers put on the Orioles on August 22, 2007. And before even that, an old National League game on June 29, 1897, saw the Chicago Colts stampede the Louisville Colonels 36-7.

“It was fun and it was special,” said left fielder Ryan Braun, who had three hits, including a home run and a double, while driving in five runs. “This game is really so much about failure, particularly as a hitter, that you rarely get a day where everyone is enjoying so much success at the same time. I’ve never been involved in a game like this and I likely never will be again. So, I enjoyed it and I’ll savor it. It’s one to remember.”2

“It was just one of those crazy games,” Brewers outfielder Jim Edmonds said. “You never know what’s going to happen when you step on the field. You keep playing and respect the situation. They’re trying. There’s a fine line between respecting the game and still playing the game. It’s a tough situation. We played well for three days and it showed in the overall score.”3

From the other dugout, a dejected Pirates first baseman Garrett Jones said, “It’s frustrating, to get beat like that. It’s never fun. They’re all swinging the bat really well, not missing anything. Nothing you can do about that, I guess. I don’t think I’ve ever seen a team hit that well all the way through the lineup.” Collectively, even the Brewers pitchers got three hits. “Today, they just all exploded. It was unbelievable to see,” Jones said.4

The previous mark for the then 124-year-old Pittsburgh franchise for the worst loss was an 18-run margin, set twice before. The first time was nearly a century earlier, on July 11, 1910, against the Philadelphia Phillies. The other was a 19-1 loss at the hands of the Cincinnati Reds on July 14, 1955.5

“It’s embarrassing,” said Pirates manager John Russell. “We can’t give up that many runs that early and try to fight back when we’re not swinging the bat well right now. You can’t pitch that way when you’re not swinging.”6

After a 1-2-3 first inning, the Brewers scored in each of the next four frames. Prince Fielder homered off starter Dan McCutchen in the second to start the scoring. The Brewers added three more runs in the third on a three-run home run by Braun. Braun battled for a nine-pitch at-bat before homering. After three more runs in the fourth, the Brewers chased Dan McCutchen from the game. His pitching line read six earned runs in 3⅔ innings. What was remarkable in a bad way was that his ERA remained unchanged at 14.73 after his outing. “Lots of times it felt like I was throwing batting practice to them,” McCutchen said.7

With yet another three runs in the fifth, the rout was clearly on. One of the runs came on a home run off the bat of catcher George Kottaras. Already leading 10-0, the Brewers used a six-run seventh inning to pile on the runs, all off Joel Hanrahan. The inning included a walk and six hits, one of them a home run by Edmonds.

Even with a 16-run lead, the Brewers weren’t done hitting, and added four more runs in the ninth inning. The Pittsburgh crowd booed most of the day, save for a sarcastic cheer as the Brewers scored their 20th run in the ninth. Trevor Hoffmancame in to pitch the bottom of the ninth for the Brewers and got three fly outs, one to each field, to mercifully end the game. Hoffman most likely was just being given some work, as the Brewers swept the series by a combined score of 36-1.

The 35-run margin of victory tied for third most in a three-game series. The record is 40 runs held by the Brooklyn Superbas (now the Dodgers), who outscored the Cincinnati Reds 50-10 in a series beginning on September 23, 1901.

The Brewers finished the day with 12 extra-base hits: seven doubles, a triple, and four home runs. Ten Brewers batters had at least one RBI. Besides Braun and his five-RBI performance, other hitting stars of the day were Jim Edmonds,Rickie Weeks, and Prince Fielder. Edmonds ripped two doubles and a home run as part of his four-hit, three-RBI day. Weeks contributed three hits, including a pair of doubles, and scored four runs. Fielder finished with three RBIs as well. And almost as an afterthought was pitcher Randy Wolf shutting the Pirates out for the first six innings and getting the win. He left with a 2-1 record and 3.70 ERA.

“They came in and kicked our butt,” Russell said. “Whoever comes in is going to do that if we don’t pitch well. We need to learn from this game. We don’t want to do this anymore.”8 The Pirates used six pitchers, with two, the starter McCutchen and reliever Hanrahan, leaving with 14.73 and 15.75 ERAs respectively.

Edmonds came back to respecting the game in this wrap-up: “Games like these are awkward. You don’t want to keep piling up the runs but you have to respect the game, and keep playing. It was a day where everything went right for us, and everything went wrong for them.”9

The Pirates were set to go on the road next. And Garrett Jones didn’t think that was a bad thing. “For us, it’s just go on this road trip and forget about games like this,” he said. “Stay confident. Keep our heads up. And tomorrow is a new day.”10 However, it should be noted that the Pirates were a miserable 22-58 road team in 2009, and sank to lower depths with a 17-64 (.210) record in 2010 away from PNC Park. That tied the record of the 1963 New York Mets for road futility in a 162-game season.

Unfortunately for the Pirates, that next road trip included a series in Milwaukee, where Pittsburgh currently had a 21-game losing streak. Game one of that series, on April 26, went only marginally better for the Pirates: The Brewers won by “only” 14 runs, 17-3. The Pirates did rebound to win the next two games in Milwaukee. However, the Brewers won the season series 13-5. Their .722 winning percentage against the Pirates was their highest against any opponent that season.

The Brewers outscored their opponent by 10 or more runs six times in 2010. Their second-largest win was an 18-1 drubbing of the Cubs in Wrigley Field on August 2. The Brewers scored the 18 runs using only four extra-base hits: one home run and three doubles.

Milwaukee finished the 2010 season at 77-85 (.475), in third place, 14 games behind Cincinnati in the National League Central Division. The Pirates finished with the major leagues’ worst record at 57-105 (.352), 34 games behind the Reds. It was the Pirates’ 18th consecutive losing season.