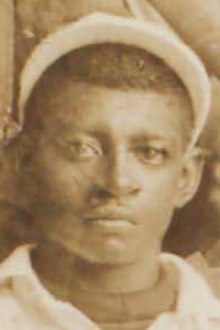 Brothers Charles “C.I.” Taylor, Ben Taylor, James “Candy Jim” Taylor, and Johnny Taylor of Anderson, South Carolina, constitute one of the most accomplished families in baseball history. Johnny pitched for various teams from 1903 to 1921. Candy Jim played and managed from 1903 to 1948 and was manager of three Negro National League champions.1 Ben Taylor is the most honored of the brothers, having been elected to the National Baseball Hall of Fame in 2006.

C.I. Taylor purchased one-half of the Indianapolis ABCs in 1914 when they were an independent club, and served as owner, manager, and occasional player through 1918.2 His 1916 team featuring Oscar Charleston, brother Ben Taylor, and pitcher Dizzy Dismukes won the Colored World Championship by defeating  Andrew “Rube” Foster’s  Chicago American Giants.

C.I. Taylor and the ABCs sat out the 1919 season because of Taylor’s frustration over meager profits.3 At age 45 he thought he was out of baseball for good, but when Foster announced plans to form the Negro National League, Taylor showed immediate interest.4 The ABCs became one of the original eight members, along with the Chicago American Giants, Chicago Giants, Cuban Stars, Dayton Marcos, Detroit Stars, Kansas City Monarchs, and St. Louis Giants.5 Taylor lured Charleston back home to Indianapolis and used his vast baseball connections to quickly put together a team. Indianapolis had the privilege of hosting the new league’s very first games. On May 2, 1920, more than 6,000 fans swarmed Washington Park to watch the ABCs sweep a doubleheader from the Chicago Giants, 4-2 and 11-4.6

After managing the ABCs in 1920, C.I. turned those duties over to his brother Ben for 1921.7 Both Taylor brothers kept close watch as the ABCs opened tryouts in Indianapolis on April 4 with a four-hour practice for 17 regulars and recruits. Many of the team’s more experienced players, including their terrific young catcher Raleigh “Biz” Mackey, would not join the team until they returned from winter ball in warmer climates.8 Players prepared for the new season with a medicine ball and calisthenics, as well as by honing their baseball skills.9

The 1920 ABCs claimed fourth place in league play, and the brothers believed they had the talent to bring a championship to Indianapolis in 1921. Charleston was plying his trade with the St. Louis Giants, but the rest of the lineup was returning. Ben Taylor would hold down first base, and bat cleanup, while speedy Morten Clark was available to lead off. The ABCs retained experienced pitchers Dicta Johnson and Jim Jeffries, who would throw to the superlative young catcher Mackey.

Indianapolis also added young players with great promise. The Taylors gave especially high praise to their new middle infielders. Charles Williams, an 18-year-old shortstop, was a superb fielder who had been hitting the ball hard in practice.10 He was paired with switch-hitting second baseman Crush Holloway, who arrived from the San Antonio Black Aces, a team that supplied the ABCs with several players — including Mackey — the previous year.11 To make way for the new arrivals, Connie Day, the last season’s second baseman, switched to third, and Clark shifted from shortstop to center field.

By April 24, with the NNL set to begin its second season in just six days, the Taylor brothers were excited to host the Cincinnati Cuban Stars at Washington Park. This exhibition would reveal the ABCs’ progress, and allow them to scout the Cuban Stars, whom they would face in Cincinnati on April 30 to open the 1921 season.

The ABCs tapped Jeffries to pitch against the Cubans. In 1920 the 28-year-old left-handed Louisville native had spent more innings patrolling right field than toeing the rubber. He hit a puny .169 with only two extra-base hits in 208 plate appearances but logged a decent 7-8 pitching mark with a 3.77 earned-run average, indicating Jeffries had more value on the hill than roaming the outfield.

The 1920 Cuban Stars had played all their league games on the road and, despite lacking a place to call home, logged a 35-34 league mark under the guidance of manager Tinti Molina. They would play home games at Redland Field in Cincinnati in 1921, and they hoped less time on the road would lead to more wins. Cheo Hernandez, their winningest pitcher in 1920 (12-10), decided to pitch for a team in Cuba, but their other top performers returned, including talented outfielder Bernardo Baro, their best hitter. There was good reason for optimism.

Opposing Jeffries for this exhibition game was José Leblanc. The 27-year-old right-hander was one of the premier pitchers in the league. His 1920 performance included an 11-9 record, a 1.99 ERA — fourth best in the NNL — and 103 strikeouts, a figure topped by only one other NNL hurler. He had good control, walking only 41 batters in 167 innings.

The fans who came to Washington Park for this exhibition game were treated to a pitchers’ duel, with Leblanc and the Cuban Stars coming out on top, 2-0. Leblanc pitched all nine innings, striking out five, while giving up six hits and a walk. He stranded eight baserunners. Indianapolis “had a couple of chances to put across some runs, but Leblanc always tightened in the pinches.”12

Jeffries also pitched a complete game. He allowed only five hits, but three were bunched in the ninth inning to produce the Cubans’ second run. Baro and Marcelino Guerra singled, and Baro scored when Matias Rios beat out a squeeze bunt. Cincinnati’s first run came in the second inning on an outfield error and an infield out. There were no extra-base hits in the game, and the only batter on either team to get two hits was Baro.

Leblanc was aided “by good work on the infield,”13 but the defensive play of the game was turned in by Williams, the ABCs’ young shortstop. In the fourth inning, “he raced back of second … grabbed Rios’s bid for a hit, stepped on second, forcing [Manuel] Parrado, and nabbed the speedy shortstop at first for a double killing.”14

When the teams met again in Cincinnati on Opening Day, the ABCs had the better of it. They beat the Cubans rather handily in the season’s initial game, 12-2, and followed that with a 3-1 victory the next day.

Sadly, the high expectations of spring went unfulfilled. Neither team improved from its first year in the NNL. Indianapolis settled for 37-37 in the league, and 55-55 in all games, while Cincinnati slid to 30-39 in league play, with an overall record of 36-44. This was the Cubans’ only year carrying the Cincinnati moniker. For the remainder of their membership in the NNL, they were known simply as the Cuban Stars, and they returned to their nomadic ways.

Jeffries blossomed into the ace of the ABCs. He led the team in wins at 15-13, ERA (3.03), and strikeouts (107). He pitched more innings (261) than any other NNL pitcher, and tied the Chicago American Giants’ Dave Brown for the most shutouts among league pitchers, with five.

Taylor hit .392 and drove in 89 runs. Mackey hit .330 with 8 home runs and 70 RBIs. Mackey joined Taylor in the National Baseball Hall of Fame Class of 2006. Williams’s spot in the starting nine was short-lived. Holloway remained in the lineup by hitting a solid .323, but he moved from second base to right field. Many years later, Holloway had this to say about C.I. Taylor: “C.I. was a great manager, a builder, a perfect gentleman. He knew how to handle men. He made a ballplayer out of me.”15

Baro, a left-handed 25-year-old outfielder, led the Cubans in the triple-crown categories, with a .343 average, 7 home runs, and 64 runs batted in. He also led the team in runs, hits, doubles, slugging, and stolen bases. He is a member of the Cuban Baseball Hall of Fame, inducted in 1945.

Not only did Leblanc lead the Cuban Stars in wins and most other pitching statistics in 1921, he was among the top pitchers in the NNL in many categories. He posted a 15-12 record, pitched 238⅔ innings with an ERA of 2.53, and registered 117 strikeouts.

After the season, Leblanc returned to Cuba to pitch winter ball. On January 29, 1922, at a game in Santiago, a dispute arose with Antonio Susini. The infuriated Susini struck Leblanc on the head with a bat, causing a skull fracture. Susini was arrested, and Leblanc was taken to a local hospital.16 He died there on January 31.17

Play-by-play is unavailable. The Indianapolis Star’s game report is brief, and the Cincinnati papers did not report on the game. No other account has been found. The available box score does not even indicate who scored Cincinnati’s two runs, although the Star reported that Baro scored the second run.

7 C.I. Taylor is listed as manager on Seamheads.com Negro Leagues Database, but various newspaper articles refer to Ben Taylor as player-manager. “Ben Taylor, brother of the A.B.C. owner, will act as playing manager this season”; “Taylor’s ABCs in Initial Workout on Next Monday,” Indianapolis Star, April 2, 1921: 13.

15 The Encyclopedia of Negro League Baseball.