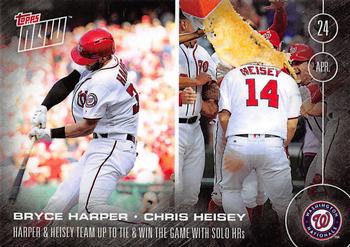 They say that if you go to the ballpark, you never know what you’ll see. If you’d come to this game, you’d have seen a lot in one game: 38 total players, three successful challenges, a starting pitcher pinch-hitting, two pitchers taking their first at-bats, a player1 going 0-for-7, and a relief pitcher who batted for the first time in six years — and reached base. No less a baseball expert than Dusty Baker said it was the “craziest game he’d ever seen,” and after as many games as Dusty had seen, that’s saying a lot.2

As with all marathon3 games, you don’t know when you sit down that you’re going to be there for a long time. It was a cool and pleasant Sunday afternoon. The teams were starting the season heading in different directions: The Twins were 5-13; the Nationals, 13-4.

Stephen Strasburg (3-0, 1.25 ERA) was pitching for the Nationals. He started by allowing a single to Eduardo Núñez, who stumbled rounding first. He came up holding his right knee, but jogged it out and stayed in the game. That was all Strasburg allowed: He induced a fly out and two strikeouts to strand Núñez. In the bottom of the frame, Tyler Duffey made his first 2016 start. He also gave up a hit to the first batter, Matt den Dekker, but it was a leadoff home run. He walked Michael A. Taylor, then Daniel Murphy singled to center. But Duffey limited the damage: He got Ryan Zimmerman and Antony Rendon to fly out, and Jayson Werth to pop up to the catcher.

Both pitchers worked a 1-2-3 second inning.

Byron Buxton swung at the first pitch in the third, hitting a double over Taylor’s head in center. Duffey came to the plate for his first major-league at-bat, using Rendon’s bat4 and Miguel Sanó’s batting gloves. Despite his inexperience he executed a successful sacrifice bunt. Núñez worked the count full, then singled to left to score Buxton. But that was all for the Twins: Brian Dozier lined out and Sanó struck out, leaving the score at 1-1. In the bottom of the third, the Nationals managed two one-out singles, but they were wasted when Rendon lined out.

In the top of the fourth, Strasburg needed only five pitches for three outs. In the bottom, Werth was out on a flying catch in center by Buxton. After Wilson Ramos walked, Stephen Drew grounded into what was originally called a 3-6-3 double play. Nationals manager Dusty Baker successfully challenged that the return throw was not in time, keeping Drew at first. But he was left there when Strasburg grounded into a force at second.

Strasburg collected two more strikeouts and a fly out in the top of the fifth. Den Dekker, the first batter in the home half of the fifth, hit a comebacker that hit Duffey on the right shoulder. Den Dekker was safe at first as Duffey couldn’t come up with the ball. Twins manager Paul Molitor pulled Duffey for Casey Fien. Taylor got a bunt single: The umpire ruled that Núñez trapped the ball trying for a catch and double play. Taylor was stranded after three consecutive balls were caught in the outfield.

The Twins got a single by Dozier, but nothing else, in the top of the sixth. Ryan Pressly was the next pitcher up for the Twins. He needed only 10 pitches for three outs.

Strasburg needed only 14 pitches for a strikeout, a groundout, and a fly out for his half of the seventh inning. Given Pressly’s pitch count, he continued in the sixth, allowing a Strasburg single but striking out den Dekker. Taylor was credited with an infield hit when Pressly kicked the ball, but recovered to shovel it to ByungHo Park, who couldn’t handle the throw. Pressly got a fly out and a strikeout to hold the score tied.

Buxton was Strasburg’s 10th strikeout to start the eighth inning.5 After Joe Mauer singled, Núñez hit an unusually high chopper to Drew, who sensibly held the ball, leaving runners on first and second. Dozier worked the count full, then hit Strasburg’s eighth pitch for a three-run homer deep to left. With Strasburg’s pitch count at 114, Baker pulled him for Matt Belisle, who held the score at 4-1, Twins. He allowed a single to Park between a fly out and a strikeout.

Molitor double-switched in Trevor May who immediately gave up a single to Rendon. Werth doubled high off the center-field wall moving Rendon to third. The Nationals fans chanted WIIIL-SONNN as Ramos came to the plate. He doubled on a hanging breaking ball, scoring two. As usual after scoring, the fans chanted “N-A-T-S, Nats, Nats, Nats, Woo!” for each run.6 The Nationals continued to threaten: Drew hit a hot smash — into, and almost out of, Dozier’s glove. Danny Espinosa was put in to pinch-run for Ramos (and stayed in to play shortstop). With Clint Robinson pinch-hitting for Strasburg, a wild pitch moved Espinosa to third, but he was left there as Robinson struck out and den Dekker lined out to end the half-inning with the score 4-3, Twins.

Felipe Rivero7 took the mound for the Nationals in the ninth with his new batterymate, Jose Lobaton. A dozen pitches later, he had a fly out and two strikeouts. The Twins sent Kevin Jepsen to the mound for the save. The shadows of the light towers had begun to creep across the field between the third-base line and the pitcher’s mound. To the delight of the cheering crowd, Bryce Harper, the reigning NL MVP, emerged from the dugout. The kids in the crowd attending for the “Screech’s Birthday”8 promotion were disappointed that Harper was not in the lineup. The kids saw something memorable as Harper worked the count full, then hit his ninth home run, tying the game, 4-4. But that was all the Nationals would get: Murphy, Zimmerman, and Rendon were out in order, sending the game to extras.

In the top of the 10th, Rivero got one out, then Jonathan Papelbon got the next two on two pitches. In the bottom, former National Fernando Abad walked Werth, then struck out Espinosa on a 65-mph pitch. Nationals starting pitcher Joe Ross9 delivered a pinch-hit single, but Lobaton squelched the rally by grounding into a double play.

The 11th inning passed quickly: six strikeouts, including Abad’s only plate appearance of the year.

In the top of the 12th, Yusmeiro Petit walked Eduardo Escobar. John Ryan Murphy bunted:  Zimmerman grabbed it and tagged him out in the baseline. With Buxton batting, Petit balked Escobar to third, but Buxton struck out for the fourth time. The Nationals intentionally walked Mauer to pitch to Núñez, who flied out to end the threat. In the bottom of the 12th, Ryan O’Rourke got two quick outs, allowed a single, and finally got Espinosa to strike out on the 10th pitch of the at-bat.

Petit worked a 1-2-3 top of the 13th. He came to bat looking for his sixth hit in a decade of playing but grounded out. Lobaton hit a comebacker that O’Rourke stopped with his foot and got the out at first. Den Dekker flied out.

Petit needed only seven pitches for a 1-2-3 top of the 14th. After the 14th-inning stretch, O’Rourke continued against Chris Heisey, who grounded to third. Baker challenged the “out” call as the ball appeared to hit the glove as the foot hit the bag. The call was “safe!” after review, to the delight of the ever-shrinking crowd. But Heisey advanced no further: A popout and a double play ended the inning.

In the top of the 15th, O’Rourke grounded out in the first10 plate appearance of his career. After Mauer struck out looking, Núñez singled into right for the Twins’ first hit since the eighth. With Dozier batting, Núñez ran for second, where he was called out. The Twins challenged: He was called safe after a four-minute review. After Dozier walked, Sanó grounded into left, scoring Núñez, finally un-tying the game at 5-4, Twins. Baker replaced Petit with “Ollie” Pérez, who struck out Max Kepler to end the half-inning.

O’Rourke got two quick outs but then walked Espinosa on four pitches. Molitor swapped O’Rourke for Michael Tonkin. Since the Nationals were out of bench players, Pérez took his first at-bat since May 14, 2010. Espinosa, by now sporting a serious 5 o’clock shadow, stole second. Pérez, hitting because the Nationals were out of pitchers and position players,11 bunted up the third-base line, but the throw by the catcher sailed over the first baseman: Pérez took second as Espinosa scored to re-tie the game, 5-5. That was all the Nationals got: Lobaton reached on a HBP, den Dekker flied out.

On to the 16th: Perez got two quick fly outs to right, then gave up a single to Murphy. Tonkin, in his second major-league at-bat,12 almost beat out a grounder to third, but Rendon’s throw got him to end the half-inning.

Heisey hit Tonkin’s third pitch over the visitors’ bullpen for a walk-off home run, indirectly assisted by some timely hitting advice from Harper.13 Nearly six hours14 after the game started, Heisey crossed home plate to the cheers of the few remaining fans and his teammates’ three buckets of Gatorade.

As my spouse was out of town, I calculated that I had plenty of time to enjoy a game and get the laundry done before she returned. As it turned out, I barely made it home before she did.

3  I define a marathon game as one that needs a 14th inning stretch.

4 Duffy and Rendon had been college teammates. Duffy had come to Washington with neither bat nor gloves: He discovered that Sanó’s were the only gloves that fit.

5 This was Strasburg’s 23rd game with 10 or more strikeouts.

7 In 2018, Felipe changed his last name to Vázquez to match his sister’s name. His professional records are listed under Felipe Vázquez. Elizabeth Bloom, post-gazette.com/sports/pirates/2018/04/09/felipe-rivero-name-change-prescilla-vazquez-sister-pirates-closer/stories/201804090160.

8 Screech the eagle is the Nationals’ mascot. If you review the video, you will see the mascot wearing a birthday cake on his head.

10 As of the date of this writing, it was also the only plate appearance of his career.

12 As of the date of this writing, it was also the final plate appearance of his career.

14 Official time of the game was 5:56. This was the longest game of the year for the Twins by either time or number of innings. The Nationals played an 18-inning game on July 17, but that took only 5:48. Oddly enough, they were also down one run going into the bottom of the ninth and tied it on a home run to send the game to extras.