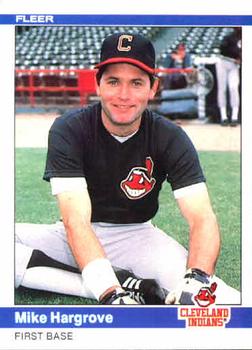 The Detroit Tigers, who didn’t arrive home from Texas until 4 AM., were off to a red-hot 16-1 start. The Bengals’ start had Detroiters wondering if the team was really that good or if its early-season opponents were that bad. The Cleveland Indians were off to a somewhat surprising start themselves. The second-place Tribe came into the game with a record of 9-6, six games behind the Tigers.

Rick Sutcliffe, the 1979 National League Rookie of the Year, drew the starting assignment for the Indians. The right-hander had revived his career after falling out of favor with the Dodgers during the 1981 season. He was 3-1 with a 2.52 ERA so far in the young season. Sutcliffe was opposed by the Tigers’ Juan Berenguer. The right-hander from Panama was making his second start of the season. In his first, he earned a victory by holding the Chicago White Sox scoreless over seven innings in a brutally cold Easter Sunday contest at Tiger Stadium.

Unseasonably warm temperatures for late April contributed to 34,112 fans turning out to enjoy the Friday evening game.1 The afternoon high in Detroit reached 79 degrees and temperatures were still in the low 70s when Berenguer delivered the game’s first pitch at 7:35 P.M.2

Indians center fielder Brett Butler drew a walk Berenguer to start the game. With one out, Butler stole second and came around to score the game’s first run when Julio Franco doubled to left.

The Tigers, who scored early and often throughout 1984, answered in the bottom of the first. Lou Whitaker led off with a single and raced to third on a single by Alan Trammell. Darrell Evans followed with a single that scored Whitaker and moved Trammell to third. Catcher Lance Parrish joined the first-inning hit parade with the Tigers’ fourth consecutive single that scored Trammell as Evans trotted to second base. Following fly-ball outs by Kirk Gibson and Larry Herndon, Barbaro Garbey, who had come to the United States from Cuba in the 1980 Freedom Flotilla,3 singled to score Evans and send Parrish to third. With two down and runners at the corners, Chet Lemon came up with a chance to inflict further damage but before Lemon could swing the bat Garbey was thrown out trying to steal second by Indians catcher Ron Hassey. At the end of the first inning the score stood at 3-1.

The Indians tied the score in the top of the second. With one out and the bases empty, Garbey misplayed a pop foul off the bat of George Vukovich. The Indians right fielder took advantage of his second opportunity and singled to right field. Otis Nixon, the Indians’ speedy left fielder, beat out an infield single to short as Vukovich moved to second. Butler grounded out to first, advancing the runners to second and third. After Tony Bernazard walked to load the basis, Franco followed with a single that drove in two runs to tie the game at 3-all. From that point of the game, the pitchers took over.

Berenguer settled down and scattered three hits over his final 5⅔ innings before being relieved by left-hander Willie Hernandez in the top of the eighth. The Tigers’ closer, who was acquired during the offseason in exchange for fan favorites Glenn Wilson and John Wockenfuss, was making his 10th appearance of the season and entered the game with a record of 1-0 with two saves and a 4.50 ERA. Hernandez got the last out of the eighth and retired the Indians in order in the top of the ninth.

Sutcliffe also settled down and was even more effective. He retired the Tigers in order in the second, third, fifth, eighth, and ninth innings, yielding harmless one-out singles in the fourth and seventh innings. The Tigers’ only threat came with two out in the bottom of the sixth inning when Sutcliffe momentarily lost his control and walked Gibson, Herndon, and Garbey in succession to load the bases. The Tigers failed to score when Sutcliffe retired Lemon on a pop fly to right that second baseman Bernazard secured to end the inning.

With the score still 3-3, Hernandez ran into trouble in the top of the 10th. Butler started things off with a leadoff single and was sacrificed to second by Bernazard. After Franco drew a walk, Tigers manager Sparky Anderson called on right-hander Aurelio Lopez to quell the Indians’ threat. Señor Smoke, who entered the game with a record of 2-0, two saves and a 1.84 ERA, was uncharacteristically wild. After striking out Andre Thornton for the second out of the inning, he uncorked a wild pitch that allowed the baserunners to move up 90 feet and walked Pat Tabler to load the bases. Lopez then walked Hassey to force in the go-ahead run before Brook Jacoby grounded out to first to end the inning.

The Tigers answered in their half of the 10th. Whitaker hit a leadoff double that ended Sutcliffe’s evening. Manager Pat Corrales summoned right-hander Ernie Camacho from the Indians’ bullpen to face Trammell, who singled to put runners at the corners. Left-hander Mike Jeffcoat was brought in to pitch to Evans, who bounced into a 4-6-3 double play that allowed Whitaker to cross the plate with the tying run. Corrales used his fourth pitcher of the inning and played the percentages when he brought in right-hander George Frazier to face the dangerous Parrish. Frazier got the better of this matchup when he retired Parrish on a groundball to short. With the scored tied 4-4, the game went into the 11th inning and settled into a protracted pitchers’ duel.4

Lopez continued to struggle with his control in the top of the 11th but was bailed out by Parrish, who caught both Nixon and Butler trying to steal second. From there, Lopez breezed through the next three innings, yielding just a single to Nixon in the 14th inning. Anderson turned over the Tigers’ pitching duties to veteran right-hander Glenn Abbott in the top of the 15th. It was his game to win or lose.

Frazier retired the Tigers in order in the 11th and 12th innings before being replaced by rookie Tom Waddell. The right-hander was equally effective. He tossed five scoreless innings of one-hit baseball before being relieved by Luis Aponte in the bottom of the 18th inning.

Just when it appeared the game might last forever, Vukovich led off the top of the 19th inning with a single. Abbott then committed two errors when he mishandled back-to-back bunt attempts by Nixon and Butler. With the bases loaded, Gibson — who had played an excellent defensive game up to that point — dropped a long fly ball off the bat of Bernazard, allowing Vukovich to score and the other runners to move up a base.5 All three errors were what Sparky Anderson characterized as “easy plays.”6

With the bases still loaded, Franco grounded to Howard Johnson at third who fired the ball to Parrish to force Nixon at the plate. After Thornton struck out, Mike Hargrove, who came to the plate hitting only .091, laced a bases-clearing double to account for the final margin of victory.

Aponte pitched a scoreless bottom of the 19th to earn the victory, his first of the season against no defeats. Abbott took the defeat, evening his record at 1-1. The time of the game was 5 hours and 44 minutes and ended at 1:19 AM.

The loss was only the Tigers’ second of the season and prevented them from tying the 1981 Oakland A’s record start of 17-1.7 However the Tigers continued on their torrid pace, winning 19 of their next 22 games to start the season with a record of 35-5 on their way to the 1984 World Series title.

In addition to the sources cited in the Notes, the author also consulted Baseball-Reference.com and Retrosheet.org

1 My father and I were among those in attendance that evening. The Indians were his favorite team and when he came home from work he suggested we head down to Tiger Stadium to catch the game. This was my first Tigers game of the year, a year I would never forget.

2 It had been an unusually cold April in the upper Midwest. The average temperature in Detroit was approximately 5 degrees colder than normal.

4 At this point that my father decided we should go and finish listening to the game on the way home. When we arrived at the car we found that it was boxed in on all four sides. With nowhere to go, we sat in the car and ended up listening to Ernie Harwell and Paul Carey call the rest of the game on WJR. The story of how we had left early and sat through an additional nine innings in the car took on a life of its own as it was frequently retold at family and holiday gatherings.