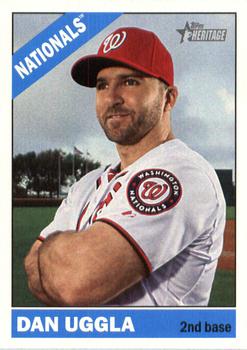 A.J. Cole’s major-league debut on this Tuesday night in Atlanta did not go well. The Washington Nationals right-hander was pulled at the end of the second inning, having given up nine hits and nine runs to Atlanta on seven singles, two doubles, and a sacrifice fly, although he did record his first major-league strikeout. Five of the runs were unearned,1 as they scored after his own fielding error (he dropped the ball while covering first). With the score 9-1, Atlanta, when Cole departed, Matt Williams, the Nationals manager, brought in Tanner Roark to eat some innings: a reasonable choice, given that Roark had been a 15-game winner as a starter in 2014.2

Although the Nationals had scored in the first and third, the score at the end of the fourth inning was 10-2, and it was looking like a blowout victory for Atlanta and a seventh straight loss for the Nationals. But the Nationals chipped away at the deficit. They scored four runs in the fifth on a sacrifice fly and a three-run homer by José Lobaton. They followed that with a solo homer by Denard Span in the sixth, chasing Atlanta’s starter, Julio Teheran, after 5⅔ innings. He had given up seven runs (three earned), leaving the score a much-less-lopsided 11-7 Atlanta at the end of the sixth. The homers by Lobaton and Span were the first of the year for each. Teheran was relieved by Michael Kohn, who earned a hold by getting the last out in the sixth.

Meanwhile, Roark had managed to limit the damage to one run in the fourth on a single by A.J. Pierzynski, but ran into trouble in the sixth. After Roark gave up a run on a single and a double, and then walked the next batter, Williams brought in Matt Thornton. He did not allow either of his two inherited runners to score. Blake Trienen pitched the seventh and eighth, allowing only one run, Atlanta’s 12th, on another single by Pierzynski in the Braves’ seventh.

Atlanta had tapped Luis Avilán to pitch the seventh with the 11-7 lead. After getting two outs, he gave up a two-run triple to Dan Uggla. Reed Johnson followed with a ground-rule double, scoring Uggla. Uggla had been released by Atlanta the previous season; the Braves were paying him $12.69 million while the Nationals were paying only the major-league-minimum portion of his salary ($507,500). During the 2014-15 offseason, he had received treatment to correct an apparent problem with his vision, which had possibly been affected by being hit by pitches in 2012 and 2013.3 His oculomotor dysfunction may have contributed to a steep decline in his playing abilities and his release by both the Braves and San Francisco Giants in 2014.4 Given an opportunity with the Nationals at spring training as a nonroster invitee, he made the team in a spot-starting and pinch-hitting role.5 This was the Nationals’ first visit to Atlanta in 2015, and many among the 14,833 fans in attendance were not shy about booing him, especially after his triple and run scored reduced the Atlanta lead significantly.

Neither team scored in the eighth; Atlanta’s Jim Johnson got a hold for his effort. The Braves called on closer Jason Grilli in the ninth with a 12-10 lead, looking for a save. Although Grilli started with a strikeout of Ryan Zimmerman, he followed that by allowing a single by Lobaton and a walk to Danny Espinosa. Uggla was up next. Grilli got ahead 0-and-2, but Uggla deposited his next offering well into the left-field stands. That made it 13-12 Nationals, with raucous cheering in the visitors’ dugout and silence in the stands–with the exception of a few visiting Washington fans. It was Grilli’s first blown save of the young season after seven successful outings.

The Nationals’ Drew Storen earned his fifth save in the bottom of the ninth, surrendering a walk but no hits. Trienen, Washington’s pitcher of record when they took the lead in the ninth inning, got the win.

The vicissitudes of baseball were in full display this night. In a game with 25 runs and 32 hits, Atlanta’s Freddie Freeman went 4-for-6, but had no RBIs. The thirty-eight-year-old Pierzynski was the offensive star for Atlanta, going 4-for-4 with 4 RBIs.

Although Denard Span (5-for-6, 11 total bases) had a statistically better night at the plate than Uggla (3-for-5, 8 total bases), the game is remembered more for Uggla’s performance against the team that released him the previous summer — which ended up paying him for a memorable performance against it. The Nationals’ Max Scherzer apparently agreed, dousing Uggla with Hershey’s chocolate sauce after the game in celebration.6 Unfortunately for Uggla, this game was not the beginning of a big comeback: He hit only one more home run over the rest of the season, finished with a .183 average, and was out of baseball after the season at age 35.7

He did, though, enjoy the comeback and the chocolate sauce bath. “There are some crazy dudes in here. They get excited and they love to show it,” Uggla enthused after the celebration.8

Span’s five hits raised his early-season average from .207 to .314. With a single in the first, doubles in the third, fifth and ninth, and a solo homer in the sixth, he was missing only an elusive triple for the cycle. Unlike Uggla, perhaps this was the game that got his year kick-started; he finished 2015 at .301, in 61 games and 275 plate appearances.9

The big nights from Uggla and Span, with steady relief pitching from Thornton, Treinen, and Storen that slowed the Braves’ attack over the final four innings, produced a comeback from an eight-run deficit–the biggest comeback in Nationals’ history.10

The baseball pictured above, from the author’s collection, was pitched by Julio Teheran to Tanner Roark in the sixth inning.  When acquiring a ball from this game she chose this one because these were the two pitchers who faced the most batters for each team.

In addition to the sources cited in the Notes, I referred to the MLB.TV recording of the game at MLB.com, the call of the game on radio station 106.7 FM, Washington, D. C., and the game box scores at Baseball-Reference.com and Retrosheet.org.

1 The mlb.com box score shows all runs allowed by A.J. Cole and Julio Teheran as earned, but both sets of announcers’ calls, the online record accompanying the recorded game, and the Baseball-Reference.com and Retrosheet.org box scores are consistent with this account. Cole allowed 9 runs, 4 earned; Teheran allowed 7 runs, 3 earned.

4 Uggla had been released by Atlanta on July 18, 2014, then signed three days later by San Francisco. Released by San Francisco less than a month later (August 7), he was signed by Washington on December 26, 2014.

6 This was the first time the chocolate sauce celebration occurred. It continued throughout the Nationals’ 2015 season. . Scott Allen, “Max Scherzer Explains the Nats’ Chocolate Syrup Celebration,” Washington Post, May 14, 2015, washingtonpost.com/news/dc-sports-bog/wp/2015/05/14/max-scherzer-explains-the-nats-chocolate-syrup-celebration/?utm_term=.1bc36095af42#comments.