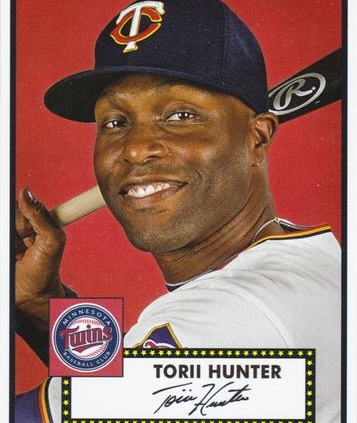 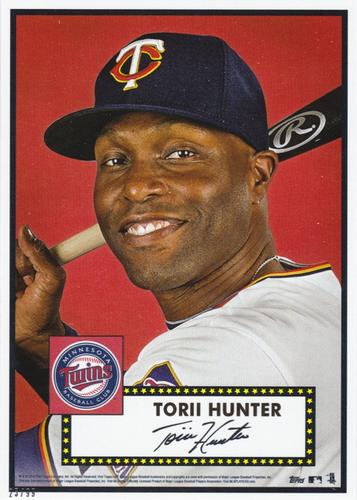 Anyone can look at Baseball-Reference.com and see the offensive statistics Torii Hunter generated during his nearly two-decade career. But mention his name to any Twins fan and undoubtedly the first thing that will come to their mind is his defensive prowess. How many game-changing, gravity-defying catches in the outfield did he make over those 19 years in the major leagues? That number may never be known but it doesn’t dampen the enthusiasm Minnesotans have for the player affectionately known as “Spider-Man” for his dazzling mix of agility, coordination, and flair.

After spending the first 11 seasons of his major-league career with the Minnesota Twins, Hunter spent seven seasons with the Los Angeles Angels and Detroit Tigers. At age 39, he returned to the team that drafted him as a teenager out of Pine Bluff, Arkansas, bringing with him the infectious smile and gregarious personality that made him one of the most beloved figures in team history. The nine-time Gold Glove Award winner is perhaps best known to casual baseball fans for his home-run-robbing catch in center field off the bat of Barry Bonds in the 2002 All-Star Game at Miller Park in Milwaukee.

Hunter was not the only “new old” face in the visiting team’s dugout as the Twins began the 2015 season at Comerica Park, home of the Detroit Tigers. It was also Minnesota native and former Twin Paul Molitor’s managerial debut with his hometown team. On a cloudy spring day with a game-time temperature of 52 degrees, the Tigers were celebrating their fourth consecutive American League Central Division championship and were led by second-year manager Brad Ausmus.

Despite having two-time Most Valuable Player Miguel Cabrera and Cy Young Award winner Justin Verlander, the Tigers had lost starting pitchers Max Scherzer and Rick Porcello coming into 2015 and ended the season in last place with a record of 74-87, 20½ games back of first-place Kansas City. The Twins, after a disappointing 2014, rebounded to finish the season in second place with a record of 83-79, 12 games behind the Royals. As Hunter was wrapping up his stellar outfield career, 2015 saw the major-league debuts of future Twins outfield stars Byron Buxton, Eddie Rosario, and Max Kepler.

After a national anthem sung by the legendary Motown group The Four Tops and a ceremonial first pitch by Oscar winner and Tigers fan J.K. Simmons, someone other than right-hander Justin Verlander (on the injured list with a triceps strain) took the mound for the Tigers for the first time on Opening Day since 2007: Left-hander David Price made his fourth Opening Day start and his first with Detroit. Right-hander Phil Hughes, making the first Opening Day start of his career, became the fourth different pitcher to start the opener in four years for the Twins.1

Torii Hunter, playing right field and batting fourth, was making his 17th consecutive Opening Day start, the longest active streak in baseball at the time.2 Hunter must have been comfortable opening the season in Detroit; he had played for the Tigers for the past two seasons. “I had a blast in Detroit,” Hunter said. “They were my enemy from Minnesota for all those years. To play in that organization and to see the internal side of it, I definitely think that’s a first-class organization.”3 What made him return to the Twins? “It’s just the right fit,” he said. “This is home. You talk about true love. I’ve got true love for Twins fans and that organization.”4

On this Monday afternoon in Detroit, the Twins seemed to pick up where they left off: In 2014 they ended the season at Comerica Park by getting shut out by David Price and the Tigers. In 2015 they began the season at Comerica Park by getting shut out by Price and the Tigers. It was the ninth Opening Day shutout in Detroit franchise history and their first at home since 1954.5 Price gave the crowd of 45,030 their money’s worth: over 8⅔ innings he allowed only five hits and featured an impressive 3/1 strike-to-ball ratio, going to a three-ball count just once in the game. “We had a game plan against Price,” said Molitor. “But he got into a rhythm there. … He was good all day.”6 “In and out, hard, soft, had us off balance, hitting his spots,” said Hunter. “I mean he had control of the game and we couldn’t do much with the pitches he was making.”7

Phil Hughes was less impressive — on their first at-bats of the season, Tigers right fielder J.D. Martinez hit a solo home run and catcher Alex Avila hit a two-run homer in the bottom of the second inning, putting the Twins in an early 3-0 hole. That proved to be more than enough run support for Price, who didn’t allow a hit until the fifth inning. Although he would be traded in the middle of the season, the tall left-hander finished the season at 18-5 with a 2.45 ERA, and was second in the American League Cy Young Award voting.

Coming to the Tigers in an offseason trade involving Rick Porcello, left fielder Yoenis Cespedes was making his Detroit debut. He did not disappoint, going 2-for-4 with a double and triple. But the buzz in the ballpark was a home-run-robbing catch he made in the top of the third inning off the bat of Twins catcher Kurt Suzuki. “I could tell Cespedes had a bead on it but I still thought it was over the fence,” Ausmus said. “Clearly I was wrong.”8

The main drama in the game didn’t come until the top of the ninth inning. After getting two quick outs, Price allowed back-to-back singles to Twins second baseman Brian Dozier and first baseman Joe Mauer. With the right-handed Hunter coming up and Price at 101 pitches (including an eight-pitch duel with Hunter in the seventh inning), Tigers manager Ausmus brought in his closer, right-handed reliever Joe Nathan. Nathan, who had played with Hunter in Minnesota and Detroit, got ahead of his former teammate 1-and-2 before striking him out to end the game and earn the save in a 4-0 Detroit victory. The game was played in a crisp 2 hours and 30 minutes.

Less happy about the conclusion of the game was Torii Hunter, who was called out on strikes by home-plate umpire Joe West on a check swing. West refused to check with first-base umpire Kerwin Danley, saying after the game, “I thought he swung, so I said he swung.”9 “I think he had dinner reservations or a concert to play in,” Hunter said of West, who released the country music album Blue Cowboy in 1987. “That was terrible. Joe West needs to do his job and he didn’t do it well.”10

Hunter retired after the 2015 season, ending his career with 353 home runs, 1,391 RBIs, and 2,452 hits. He was inducted into the Twins Hall of Fame in 2016 and remained a familiar face at Target Field, serving as a special assistant in the front office and a periodic television analyst. As a sold-out crowd in Minneapolis cheered their former star outfielder when he threw out the first pitch before Game Three of the American League Division Series in 2019, each one of them could have picked their favorite Torii Hunter catch and not duplicated an answer.

The author would like to thank Nathan Bierma for his help in accessing the Detroit Free Press archives.