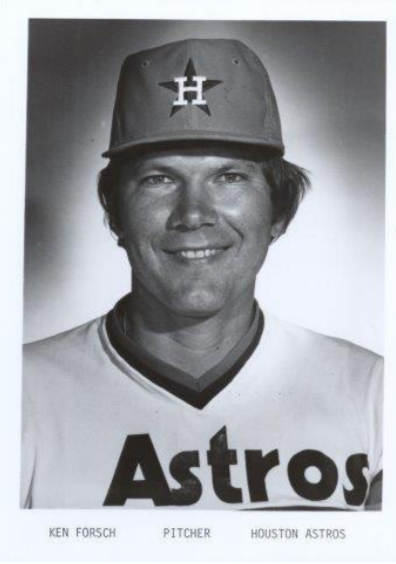 To relate each of the historical events that converged in the Houston Astrodome the night of April 7, 1979, to the unique accomplishment that followed, a historian has to traverse the previous 65 years of baseball history.

First, one has to stop in St. Louis. There, on April 14, 1917, Chicago White Sox pitcher Eddie Cicotte threw a no-hitter against the St. Louis Browns. It was the earliest date for a no-hitter in the regular season. It would remain so for the next 62 years.

The next stop through baseball history comes in Brooklyn. It was September 21, 1934. On their way to an eventual world championship, the St. Louis Cardinals visited the Dodgers for a doubleheader. This was no ordinary season for the Cardinals pitching staff. In addition to their young superstar, Dizzy Dean, who, as the game-one starter, was in search of his 27th win of the season, St. Louis also boasted Dizzy’s 22-year-old brother, Paul, a 17-game winner in this, his rookie season. Paul would start game two.

On this day, the Dodgers batters never stood a chance in either game. In the opener, Dizzy poured fastball after fastball over the plate and throttled Brooklyn, 13-0. After no-hitting Brooklyn for seven innings, Dean allowed three singles in the final two innings to finish with a complete-game three-hitter. As if that weren’t enough, however, in the nightcap, Paul completed what Dizzy couldn’t — he threw a no-hitter, which prompted from Dizzy the quip: “If I had known you were going to pitch a no-hitter, I’d have pitched one too.”1 No-hitters from a pair of brothers would have to wait a while.

Finally, we return to St. Louis, where, on April 16, 1978, Cardinals right-hander Bob Forsch, in his third start of the season, defeated the Philadelphia Phillies, 5-0, in what would be the first of two career no-hitters. With that, the stage was set for a very special night in Houston almost exactly one year later.

There was little to suggest that Bob Forsch’s older brother, Ken, was in for a particularly effective performance that day. After winning his first major-league game as a September call-up to the Astros in 1970, Ken had spent the next three seasons as a starter, amassing an unimpressive 23-28 record, before being mostly relegated to the bullpen for the next five years. He enjoyed some good years as a late-inning specialist, including a 1976 campaign in which he tallied 19 saves and made the NL All-Star team. In 1978 Forsch made just six starts but completed four, won 10 games and produced a 2.70 ERA, and as the 1979 season dawned, Forsch once again found himself as a member of the Astros’ starting rotation.

He had endured a rocky spring, however. During the exhibition season, Forsch made just two starts, worked only 10 innings, and surrendered an abysmal 27 hits. In his final spring outing, on April 3 against the Montreal Expos, he allowed 13 hits in seven innings. Sometime during that game, too, Forsch suffered an insect bite on his left elbow, and as the Astros opened their season in the Astrodome on Friday night, April 6, against the Atlanta Braves, the bite had swollen so severely that Forsch, who was scheduled to start the season’s second game the following day, was questionable.

On Friday night, Houston scored two runs in the bottom of the first inning and held on to defeat the Braves, 2-1. The next day 24,325 fans were on hand as Forsch, with a career record of 55-62, overcame the bug bite and started the season’s second contest. It would be the greatest game of his career.

Reflecting on his poor spring during an interview after the game, Forsch said, “After the spring I had, I figured I got it all out of my system. I said to myself, ‘I’ve given up all the hits I’m going to give up.’”2 And for this one night, he had.

On the mound for Atlanta was left-hander Larry McWilliams. Given his superb rookie season (9-3, 2.81) in 1978, the Braves undoubtedly felt McWilliams gave them a solid chance to even their record at 1-1. Yet after Forsch easily retired the first three batters to start the game, Houston plated two runs in the bottom of the inning, and that would be all the offense the Astros needed.

In the end, Forsch was never tested. Against the leadoff batter, Jeff Burroughs, in the top of the second inning, Forsch issued a walk on a 3-and-1 count, yet quickly retired the next three men on a foul popup, a groundout that forced Burroughs, and a strikeout. In the fourth inning, the Braves came closest to getting a hit when Glenn Hubbard stroked a sharp grounder to third baseman Enos Cabell, but Cabell fielded the ball cleanly on one hop and rifled a throw to first to beat Hubbard by two strides. With two outs in the eighth inning, Forsch issued his second walk, to Barry Bonnell, but a weak grounder to second by pinch-hitter Bob Beall snuffed out any chance Atlanta had of generating a rally. As the Braves came to the plate in the top of the ninth, trailing 6-0, Forsch stood just three outs away not only from the first no-hitter of his 10-year career, but also from joining his brother as the only siblings ever to throw one.

In the seventh inning, sensing the magnitude of what was evolving, the Astrodome crowd had begun cheering every out. Likewise, when Forsch came to bat with two outs in the bottom of the eighth, he received a 20-second standing ovation. Now, as Forsch stared in for the sign against the leadoff hitter, left-handed pinch-hitter Rowland Office, the whole stadium was abuzz with excitement. As Forsch delivered, Office watched the first pitch go by for strike one. Then he tapped a slow grounder to second and was easily thrown out at first. That brought to the plate right-handed-hitting Jerry Royster. As the crowd held its collective breath, Royster worked the count to 2-and-1. And then, swinging away, Royster drilled a searing liner down the third-base line, but it veered foul by 10 feet. It was the hardest-hit ball of the night and proved to be the Braves’ last gasp. On the next pitch, Royster grounded out to shortstop Craig Reynolds, and finally, Hubbard, too, grounded out to Reynolds. As the ball smacked into the glove of first baseman Cabell (he had changed positions in the top of the eighth), the Astros charged from their dugout and mobbed Forsch halfway between the mound and the first-base line, while the crowd stood and roared its approval. Ken Forsch had thrown the sixth no-hitter in Houston franchise history3 and the earliest gem in the history of the major leagues.

“I realized I had the no-hitter way back in the third inning,” Forsch told the press, “and in the seventh, I smelled it.”4

“I figured that my rhythm was going so well there was no way they were going to get a hit. Now I’m gonna try to pitch another one this year.”5 He never did. Just 356 days earlier, Bob Forsch had thrown his no-hitter. Bob was at his home in St. Louis when he learned of Ken’s gem. “That’s just great, isn’t it?” Bob said when interviewed on the phone. “I think it’s fantastic. The only bad part is that it’s [Ken’s] first game of the season so it’s all downhill from here. I’m so happy that he pitched one – I know exactly how he feels. Now that we’re the first brother act, it’s unbelievable … just fantastic.6

“Right now,” Bob said, “he’s getting so many phone calls. You don’t realize exactly what you’ve done until you get home. I’m gonna try to get ahold of him in a few hours and if I can’t, I’ll send him a telegram in the morning.”7

In recognition of Ken’s accomplishment, four days later the Texas House of Representatives designated April 11 Ken Forsch Day in the state. That evening the Astros presented Forsch a new car in honor of his no-hitter.

6 As of October 31, 2015, the Forsches remain the only brothers to each throw a no-hitter.