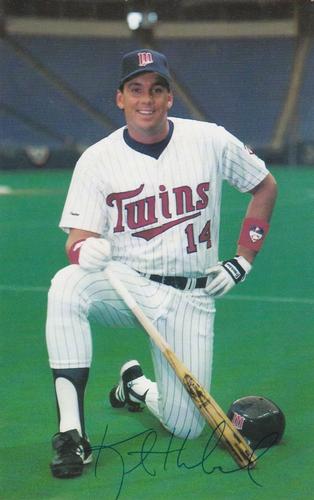 Much was new for the Minnesota Twins in 1987 as they opened their season against the Oakland Athletics.

The team had new uniforms, abandoning the pullover jerseys and elastic-band pants that looked like pajamas, and switching to traditional uniforms and a return to pinstripes.

The spongy artificial turf that had vexed fielders during the first six years in the Hubert H. Humphrey Metrodome was gone, replaced with a new type of turf that looked more lush and was to reduce the size of the hops on batted balls. Oakland’s Reggie Jackson — back with his ancestral team for a final season — didn’t have an opinion on the new surface. “Where I’m trying to hit the ball,” he said, “the turf’s got nothing to do with it.”1

The Twins were new. In addition to manager Tom Kelly being in his first full season, they were starting the season with 11 of 24 players who had not been on the Opening Day roster the year before. The only time in the team’s history in Minnesota that it had topped that percentage was in 1977, when 12 of 25 players were in their first opener with the Twins.2

Among the new players was outfielder Dan Gladden, who was getting his first look at the Metrodome. The night before the season opener, the Twins played an exhibition game against the Minnesota Gophers and had Gladden shag some flies. The dark roof could be a problem for fielders trying to see the ball. Even though the stadium authority had installed extra lights to illuminate the inside of the fiberglass roof, fly balls remained an adventure in night games.3 After the workout, Kelly decided Gladden still needed more acclimatization and decided to start him as the designated hitter rather than in left field.

Also new in 1987 was that Gladden would bat leadoff, unlike the season before, when Kirby Puckett usually operated in that spot.4 Puckett had hit 31 home runs in 1986 and was better suited to be within the heart of the batting order, surrounded by other strong hitters such as Kent Hrbek, Tom Brunansky, and Gary Gaetti.

More than 6,000 fans had attended the Twins-Gophers exhibition game, and a strong final day of ticket sales put more than 43,000 in the seats for the game against Oakland.

Bert Blyleven started for the Twins and fell behind right away. Mike Davis lined a double to right to start the season and, one out later, stole third. He had to hold as Carney Lansford grounded back to Blyleven, but he scored soon after on a wild pitch.

Oakland southpaw Curt Young was in trouble in each of the first three innings, although he escaped the first two times. Gladden led off the first with a double but got no farther than second base. The Twins put runners on first and second with no out in the second. Mark Davidson was unsuccessful with a sacrifice attempt as Young fielded his bunt and forced Hrbek at third. Greg Gagne also grounded into a force out. After Tom Nieto walked to load the bases, Gladden struck out to end the inning.

In the third, though, Steve Lombardozzi doubled and Puckett homered to left. Gaetti tripled to center and scored on Hrbek’s grounder to make it 3-1. After that, Young settled down and allowed only one walk over the next five innings. He struck out seven between the fourth and the seventh, giving him 10 for the game, three more than his previous high.

The Athletics got a run back in the fourth when Tony Phillips doubled and came around on a pair of groundouts. Dwayne Murphy started the fifth by walking, and with two out Alfredo Griffin homered to right to give Oakland a 4-3 lead.

The Twins got a break when Young had to leave the game after seven innings with a blister on his left hand. Gene Nelson relieved and gave up singles to Puckett and Gaetti to put runners on first and third. Puckett scored the tying run when Hrbek bounced out to second.

New pitchers in the ninth — George Frazier for Minnesota and Bill Krueger for Oakland — retired the sides in order. The primary excitement came from Reggie Jackson, who led off the inning. With the count 2-and-2, Jackson put up his hand to ask for time. Plate umpire Dave Phillips didn’t call time, but he did call a third strike when Frazier put one over.

Jackson took out his frustration on Nieto. Unhappy that the Twins catcher had been chattering when Frazier was getting ready to pitch, Jackson used salty language in advising Nieto to stay quiet when he was hitting. Nieto responded with similar verbiage, which became animated enough for the dugouts and benches to clear. There were no punches or even skirmishes, just the usual “Hold me back, bro” bravado of players rushing onto the field and then mingling when they realized they don’t know what else to do.

The 10th began with excitement of a different kind as Mickey Tettleton hit a 2-and-1 pitch to center that looked long enough to put the A’s ahead. Minnesota fans remained hopeful, though, accustomed to watching Puckett get back to the fence and time his leap. Puckett prevailed again, jumping and catching the ball above the top of the center-field fence. The play brought the loudest reaction of the night.

Puckett wasn’t done. After Lombardozzi was credited with a single when Phillips couldn’t handle his grounder to lead off the bottom of the inning, Puckett got enough of his bat on a curveball to hit a soft fly to right that dropped in. Lombardozzi made it to third, and Puckett had a double. Krueger intentionally walked Gaetti, and Oakland pulled its outfield in. Hrbek hit a drive well beyond the fielders, bouncing it off the left-field fence for a game-winning single.

The fans left happy, pumped about seeing an extra-inning win in the first game of the season, exhibiting the opening-day enthusiasm that often prevails even when long-term optimism isn’t present. The Twins were coming off a dismal previous two seasons, but 1987 brought another new feature: playoff games in the Metrodome.

Minnesota didn’t have a dominant team, but neither did its opponents in the American League West Division. Although the Twins won only 85 games during the regular season, it was enough to take the division title by two games over the Kansas City Royals. The postseason brought an upset with Minnesota taking four of five from the Detroit Tigers, who had won 98 games, and then a four-games-to-three World Series win over the St. Louis Cardinals.

The World Series victory was the Twins’ first since they came to Minnesota and gave the state its first overall major-league championship since the Minneapolis Lakers won the National Basketball Association title in 1954.

3 The cause of fly balls being lost in the roof has often been attributed to the roof being white, which causes a white ball to blend into it. However, the ball actually shows up as a dark spot to a fielder looking up at it with the translucent roof as a background. During the day, this dark spot was easier to pick up as the translucent roof remained light. At night, however, the roof darkened and tracking fly balls became a treacherous activity.

4 Soon after Tom Kelly took over as interim manager in September 1986, he moved Puckett out of the leadoff spot.