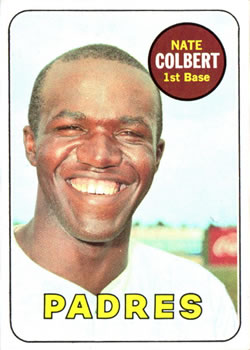 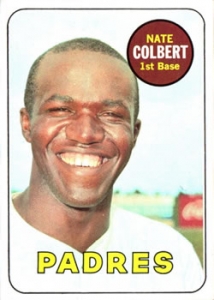 On the team flight to Atlanta after the Padres’ 3-2 loss at Houston on July 31, manager Don Zimmer sat down next to first baseman Nate Colbert and asked how he felt. Atlanta was the third stop on a five-city, 16-game road trip and Zimmer was concerned about his big slugger, who had recently twisted his left knee in a home-plate collision. Colbert reassured his boss that he was fine, figuring Atlanta was a good place to get healthy.

Colbert signed with his hometown St. Louis Cardinals after graduating from high school in 1964, and then spent three seasons in the Astros organization before heading to San Diego in the expansion draft.

Colbert’s propensity for the long ball quickly made him the face of the franchise, giving the Padres fans something to look forward to during an otherwise dismal 110-loss first season. Colbert hit 38 homers in 1970 and his 27-homer season in 1971 was highlighted by his being named to his first All-Star team.

Colbert started off slowly in 1972, even by his standards. A career .258 hitter entering the season, Colbert was at a season-low .194 on June 15. As the San Diego summer started to warm up, so did Nate, raising his average to .233 on the eve of the All-Star Game, coincidentally played in Atlanta. Colbert scored the winning run in the National League’s 4-3, 10-inning victory and then hopped a plane to join his teammates in Cincinnati.

A two-homer game against the Astros in Houston in the second game of a July 30 doubleheader gave Colbert the National League lead by one home run (25-24) over Johnny Bench, and his 68 RBIs ranked third behind the 75 posted by Bench and Willie Stargell.

The Tuesday, August 1, doubleheader in Atlanta was the first of a four-game series and despite Colbert’s earlier optimism the day didn’t start as planned. Plagued with chronic back issues that would ultimately end his career at the age of 30, Colbert woke up and could barely move, so he took an early cab to the ballpark for treatment. After a while, Colbert went into Zimmer’s office and said he didn’t think he could play; Zimmer asked him to wait until after batting practice to decide.

“I took 10 swings and hit all 10 into the seats, seven fair and three foul,” Colbert recalled. “I walked past Zim and he said, “You’re in.”1

Clay Kirby scattered seven hits in pitching a complete-game shutout in the Padres’ 9-0 victory in the first game. Ron Schueler took the loss. Colbert paced the way on offense, going 4-for-5 with two homers and driving in five runs. He hit a three-run homer off Schueler in the first inning, which held up as the game-winning hit. A solo home run to lead off the seventh against Atlanta reliever Mike McQueen added the Padres’ eighth run.

In the first inning of the second game, Larry Stahl drew a two-out walk and Colbert came to the plate to face right-hander Tom Kelley. Colbert hit Kelley’s first pitch into the upper deck just foul down the left-field line before also drawing a walk. Cito Gaston then hit a chopper back to the mound which Kelley threw wildly past first base, allowing two unearned runs to score and giving the Padres the early lead.

After Fred Stanley grounded out leading off the second inning, Kelley walked the next two hitters and was replaced by righty Pat Jarvis, who allowed a run-scoring single to Dave Roberts and walked Stahl. This brought Colbert to the plate with the bases loaded. Colbert took the first pitch for a ball, then lined a high slider deep into the left-field stands for a grand slam and a 7-0 Padres lead.

Colbert grounded to third in the fourth inning. Meanwhile, San Diego starter Ed Acosta had held the Braves to just one run through six innings.

Colbert came up for his fourth at-bat in the seventh against right-hander Jim Hardin. Larry Stahl grounded a one-out single to center and Colbert followed up by lining a Hardin slider just inside the foul pole in right, a two-run homer that extended San Diego’s lead.

Acosta tired in the bottom of the seventh and was charged with four runs. The Braves chipped away, adding two more runs in the bottom of the eighth, cutting what had been a 9-1 deficit to 9-7 heading into the top of the ninth. Side-arming righty Cecil Upshaw was now pitching for Atlanta. Stahl once again gave Colbert a chance to hit, grounding a two-out single to right. “Upshaw always gave me problems,” Colbert recalled. “For some reason, maybe to fool me because I was swinging early in the count, he threw me a fastball overhand and I hit that one out.” As Colbert rounded second base he said to umpire Bruce Froemming, “I don’t believe this,” to which Froemming replied, “I don’t, either.”2

It was 11-7 in the Padres’ favor and when Atlanta failed to score in the bottom of the ninth, that stood as the game’s final score.

On May 2, 1954, 9-year-old Nate Colbert and his father were seated in the upper left-field grandstand in St. Louis to watch their beloved Cardinals take on the New York Giants in a doubleheader. The Cardinals’ superstar outfielder, Stan Musial, hit five homers that day and drove in nine runs. For the day, Musial set the record for the most homers in a day with five, the most runs batted in (nine), and the most total bases (21).

The Padres completed the first four-game road sweep in franchise history in Atlanta, then continued to Los Angeles and San Francisco before returning home to face the Dodgers on August 11. Before the game the Padres honored Colbert for his accomplishment and surprised him by him by flying in Musial to take part in the ceremony.

Colbert’s day included breaking Musial’s RBI record with 11 (broken in 1993 by Mark Whiten) and his total-base record with 22. His five homers came off five different pitchers and he reached base eight times in 10 plate appearances.

Colbert was an All-Star again in 1973 at the age of 27 but then his back problems intensified and finally forced him out of the game after he was released in spring training in 1977 by the Toronto Blue Jays at the age of 30.

In addition to the sources cited in the Notes, the author also consulted Retrosheet.org, Baseball-Reference.com, and Padres360.com.

1 All quotes taken from the transcript of a phone interview between Colbert and historian Seth Swirsky unless otherwise noted. seth.com/coll_histbseballs_18.html.