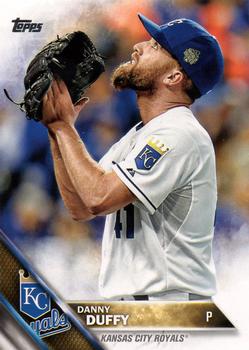 Two situations that can usually spin a crowd into a frenzy at a baseball game are when a starting pitcher goes deep into a game without yielding a hit or when he approaches a strikeout total in the double digits by midgame. Kansas City’s Danny Duffy had both factors going for him when he faced the Tampa Bay Rays on August 1, 2016. But this particular crowd didn’t get overly excited about Duffy’s performance, since his pitching gem occurred in front of a small crowd of Rays fans at Tropicana Field.

The 27-year-old Duffy turned in a masterpiece performance; he struck out a Royals record 16 batters and took a no-hitter into the eighth inning. Based on his five-year major-league record up to the 2016 season, Duffy wouldn’t have been high on the list of pitchers who would be expected to turn in such a sterling performance. His career stats were average at best, a 24-30 record, 3.80 ERA, 1.360 WHIP, and 7.1 strikeouts per nine innings.

The defending World Series champion Royals had been hot and cold during the first half of 2016. They were in first place (35-30 record) as late as June 15, but by the end of July had sunk to fourth place, 12 games behind the Cleveland Indians in the American League Central Division.

The Rays were bringing up the rear of the American League East Division, 16½ games behind the first-place Baltimore Orioles. They were competing in a tough division; all four teams ahead of them were playing .500 ball or better. Even the fourth-place New York Yankees were only seven games behind the Orioles at the end of July.

The night game at Tropicana Field drew 13,976 fans, which was typical for games there.1 It was the beginning of a four-game series that wouldn’t have much bearing on either team’s standing.

Tampa Bay manager Kevin Cash gave the starting nod to ace Chris Archer. Archer was having a terrible season with a 5-14 record and 4.42 ERA, after having finished fifth in the Cy Young Award voting in 2015.

An old-fashioned pitching duel ensued for the first six innings.

Right-hander Archer and left-hander Duffy were both perfect in the first two innings, with Duffy coming out of the gate strong with five strikeouts.

Paulo Orlando got a double with one out for the first Royals hit in the top of the third inning. After he was sacrificed to third, Archer got out of the inning on a grounder. Duffy struck out two more as he retired the side in order in the bottom of the inning.

In the top of the fourth inning, Archer gave up a single to Cheslor Cuthbert, but faced only three batters that inning with the aid of a double play. In the bottom half, Duffy allowed his first baserunner of the game when he walked Logan Forsythe. Forsythe advanced to third on an errant throw by Duffy in a pickoff move. But Duffy eliminated the threat of a Rays score by striking out two more batters.

Kendrys Morales got the Royals’ third hit in the top of the fifth, but again Archer shut them down without any runs. Duffy countered with his 10th and 11th punchouts in the bottom of the inning.

Both pitchers threw scoreless innings in the sixth inning, as Duffy added another strikeout. Royals manager Ned Yost commented after the game, “Quite frankly, I wasn’t even paying attention until about the fifth or sixth inning. I looked up and saw no hit. And I thought: ‘Whoa.’”2

Through six innings, Archer had been almost as tough on the hill as Duffy. But the Royals broke the scoreless tie in the top of the seventh on a solo home run by Morales, a towering shot over the center-field wall, his 17th homer of the season. By now, the entire ballpark was well aware of Duffy’s possibility for a no-hitter. He continued his no-hit bid in the bottom of the inning by striking out two more (13th and 14th), including Evan Longoria and Steven Souza for the third time each.

Yost started to think about Duffy’s pitch count, which eventually reached 110 pitches, as a factor in the outing, but he concluded that Duffy wasn’t coming out until he gave up a hit. Yost said after the game, “If he got through the eighth, he was going back out.”3

The Royals added two more runs in the top of the eighth inning. Orlando singled and was sacrificed to second. Alcides Escobar then hit a line-drive single to left that scored Orlando. Kevin Jepsen relieved Archer and threw a wild pitch that advanced Escobar to second. Cuthbert singled and Lorenzo Cain hit a fly ball that scored Escobar to increase the Royals’ lead to 3-0.

Duffy had been escaping into the clubhouse between innings to relax.4 Perhaps he was seeking seclusion to avoid the long-standing superstition of being jinxed by someone in the dugout mentioning his no-hit bid.

Desmond Jennings, who was playing his first game since June 30, led off the bottom of the eighth inning. He disrupted Duffy’s date with immortality when he broke up the no-hitter with a double to deep left field. Undeterred, Duffy got Kevin Kiermaier to line out to deep center and struck out his 15th and 16th victims to leave Jennings stranded.

With Duffy having given up the hit in the eighth, Yost didn’t have to make a tough pitching decision in the bottom of the ninth. Kelvin Herrera relieved Duffy and retired the side in order for the save.

The last no-hitter by a Royals pitcher was on April 26, 1991, by Bret Saberhagen. Duffy’s 16 strikeouts eclipsed the franchise record of 15 by Zack Greinke on August 25, 2009. “It’s an honor to have a game like those guys,” Duffy said, “But I understand they had a lot more of those consistently than I did. Here’s to trying to do it more consistently myself.”5 Duffy’s highest previous strikeout total for an outing was 10.

Jennings hit a 95-mph fastball off Duffy for the lone Rays hit. Royals catcher Salvador Perez blamed himself for calling the pitch after previously getting Desmond out on a changeup and slider in his two prior at-bats. But Duffy took Perez off the hook by offering, “I was perfectly content with the pitch and how it turned out. It was a fastball up and you have to tip your hat to (Jennings).”6

An indicator that Duffy was indeed at the top of his game was that Rays batters made contact on just 26 of their 60 swings against him. Reportedly, his swing-and-miss rate set a record for any starting pitcher over the past 15 years.7 Fifteen of the 16 batters Duffy struck out went down swinging.

While Duffy was pitching the game of his life, Archer was hurling a credible game himself. He gave up three earned runs in 7⅓ innings. He yielded six hits and one walk while striking out six. Archer kept the Rays in the game into the eighth inning. He took the loss and wound up leading the American League with 19 losses for the season.

Duffy continued to pitch well in August, recording four more victories, including his 10th consecutive win. He finished the season with a 12-3 record and 3.51 ERA and wound up as the best performer among the Royals’ starting pitchers.

In addition to the sources cited in the Notes, the author consulted Baseball-Reference.com and the 2017 Kansas City Royals Media Guide.