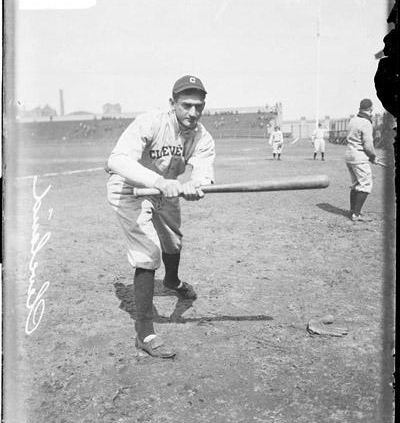 The August 11 game in Cleveland’s League Park between the sixth-place Naps and the last-place New York Highlanders attracted only 2,497 fans. It was Cleveland’s smallest Sunday crowd so far in 1912. Those who attended were rewarded with an 8-3 win by the home team, and the chance to witness a rarity. Shoeless Joe Jackson became just the sixth major leaguer — and the first in the American League — to steal home twice in one game.1

This contest was the final installment of a four-game series. The Naps had claimed the first three encounters, 8-5, 3-1, and 5-1. Those wins gave Cleveland a healthy nine games to three advantage over New York for the season.

The Highlanders turned to 22-year-old rookie George “Iron” Davis (0-2) in hopes of salvaging one win in Cleveland, and ending their current seven-game losing skein. Davis had been a collegiate pitching sensation at Williams College, but was having a harder go of it in the American League. He signed with New York in late June — going directly from campus to New York’s roster — and started twice against the St. Louis Browns in July. He lost both times. In 17 innings over two games, Davis lavished the Browns with 19 hits, seven walks, and eight runs. Although ineffective against St. Louis, Davis nevertheless earned this start against the Naps by holding Detroit to just one run in 6⅔ innings of relief on August 7.

Fred Blanding (11-11), who already owned three wins against New York, took the mound for Cleveland. It had been nearly a month since he last left the field with a win. After taming the Philadelphia Athletics 5-2 on July 14, he lost his next five starts, beginning with a 10-inning 4-3 loss to the Highlanders on July 17.

The Naps made an unexpected change to their lineup when regular third baseman Terry Turner stayed home because his wife became ill.2 In his place, Howard Baker made his major-league debut. The 24-year-old was signed by Cleveland less than a week earlier on the strength of his performance for a Bridgeport, Connecticut, semipro team, where he was playing shortstop, and hitting around .600.3 This game would mark his first time playing on a grass infield.4 As Henry P. Edwards of the Cleveland Plain Dealer remarked, Turner’s absence gave Baker “a chance to show whether or not he is miscast when placed on the roster of a big-league team.”5

In the first inning, Blanding retired the Highlanders in order, but Davis allowed two Naps to score. With one out, Bill Hunter walked. Jackson singled to right, and when Guy Zinn let the ball get past him for an error, Hunter scored and Jackson raced to third. Napoleon Lajoie popped to the shortstop for the second out, but Davis walked Art Griggs to put runners at first and third.

Cleveland immediately pulled off a delayed double steal. Griggs broke for second, drawing a throw from catcher Ed Sweeney and allowing Jackson to scurry home. Griggs reversed course, heading back to first base, and when New York first sacker Hal Chase muffed the throw from the shortstop, Griggs made it safely. Baker ended the rally: His first at-bat as a professional was a foul popup caught by Chase.

Two more Naps scored the following inning because of New York’s defensive failures. Roger Peckinpaugh singled sharply to left. Del Paddock fielded Steve O’Neill’s bunt but after a moment of indecision threw late to second base, and both runners were safe. Blanding also dropped down a bunt, this one fielded by Davis, who threw too late to third trying to force Peckinpaugh. With the bases loaded and no outs, the Highlanders turned a 6-4-3 double play, which allowed Peckinpaugh to score and O’Neill to reach third base. Hunter singled, driving in O’Neill, to give Cleveland a 4-0 lead after just two innings.

Cleveland stretched its lead in the fifth when Hunter and Jackson walked and moved up on a sacrifice by Lajoie. Griggs singled, bringing both runners home and raising the score to 6-0.

While Cleveland was circling the bases nearly at will, New York was not making much of a fuss. The bare minimum of 18 Highlanders batted in the first six innings. Zinn bunted for a hit in the second inning and stole second base, but was erased attempting to swipe third. No other Highlanders reached base.

New York finally mounted an attack in the seventh. Bert Daniels singled to start things, and, after an out, two more singles filled the bases. Hack Simmons flied out to center field and Daniels trotted home to score their first run.

In the bottom of the seventh, Jackson made history. He led off the inning with a single, and remained at first when Lajoie flied out. With Griggs batting, Jackson stole second base, then third. Griggs walked for the second time in the game, putting runners at first and third with one out.

The stage was set for another double steal. Griggs broke for second, and Sweeney threw down in hopes of nailing him. His throw was too late to get Griggs, and for the second time in the game Jackson crossed the plate with a steal of home.

Baker grounded to Paddock at third, who threw across the diamond to retire Baker at first. Griggs dashed for third, and Chase fired the ball back to Paddock covering the bag. Paddock caught the ball, but when he swung his arm around to make the tag, the ball flew from his glove, and toward the grandstands, allowing Griggs to easily score the eighth and final Cleveland run. Because of Paddock’s blooper, fans “all but shrieked with laughter.”6

Trailing by seven, New York came to life in the ninth. Daniels singled and scored when Chase tripled down the right-field line. After a groundout, Zinn popped a double into left, sending Chase home with the second run of the inning. It appeared Blanding was vulnerable, but the next two batters grounded right back to him. He tossed them both out at first, and Cleveland walked off the field with an 8-3 victory.

For Davis, it was the third loss of his fledgling career. He served up seven hits, and six walks. His teammates committed five errors, and were guilty of additional misplays, causing the New York Sun to call it “a sorry exhibition of baseball”7 and the New York Tribune to blame the five-run margin as much on defense as pitching.8 Davis finished his rookie campaign 1-4, with his only victory coming in a rematch with the Naps on August 27, when he prevailed 6-4 in the second half of a doubleheader.

Jackson’s historic day included 2-for-3 at the plate, four stolen bases, three runs scored, and a run batted in. When the season came to a close, the supremely talented Jackson led Cleveland in every offensive category (Lajoie matched his 90 runs batted in) and topped the AL with a record-setting 26 triples. He and Ty Cobb tied for the league lead in hits with 226, but Cobb claimed the batting title at .409 to Jackson’s .395.

Cleveland finished fifth in the AL at 75-78. New York placed eighth in the eight-team league. The Highlanders’ 50-102 record left them two games behind seventh-place St. Louis and 55 games behind first-place Boston. The Highlanders compiled the lowest fielding percentage and the highest earned-run average of any 1912 AL team.

6 “Naps Make It Four in a Row from the New York Jokes.”