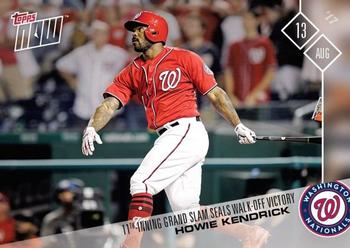 The first pitch was thrown at 7:04 P.M., starting the third game between these two teams in less than 21 hours. The previous night’s rain-delayed game had started at 10:06 P.M., which the Nationals (69-46) won 3-1 after 1 A.M. They then played the Sunday afternoon game at 1:05 P.M.: The Giants (47-71) evened the series with a 4-2 victory. Both teams showed some signs of fatigue in this third game: as close to a tripleheader as could occur in the modern era.1

Max Scherzer (12-5, 2.23 ERA) took the mound for the rubber game, rescheduled from the rainout Friday night. Scherzer worked a 1-2-3 inning with a little help from his rookie center fielder Andrew Stevenson: He got turned around on a Joe Panik fly ball but managed to make a running catch. Matt Wieters appeared to be unsuccessfully breaking in a new glove: He dropped several pitches after he caught them.

Matt Moore (3-12, 5.88 ERA) took the hill for the Giants. After Stevenson struck out, Wilmer Difo extended his hitting streak to nine games with an infield single, beating the offline throw to first, but he was erased at second on a fielder’s choice. Ryan Zimmerman got the Nationals’ second hit, a line-drive single to center, but Anthony Rendon was out on a foul pop to end the inning.

Scherzer worked a 1-2-3 top of the second, including a strikeout of Buster Posey, whose bat flew into the stands on his final swing – luckily, no one was injured. Wieters reverted to his old glove, which seemed to hold onto balls better than the new one. In the bottom of the second, after Howie Kendrick was out on a foul tip, Wieters hit one down the left-field line into the corner. He made it to second but was tagged out when he came off the bag after sliding in. Jarrett Parker, the Giants left fielder, earned an assist on the play. Michael A. Taylor singled, then made it to second after the shortstop, Kelby Tomlinson, kicked the ball while trying to field it. This was Taylor’s first start after returning from five weeks on the DL with an oblique injury. He had been called back from his rehab assignment with Harrisburg that morning to replace Bryce Harper, who slipped on a wet first base in the Saturday night game, seriously injuring his knee.2 Although Scherzer was 6-for-9 with runners in scoring position, Moore caught him looking to end the inning.

The top of the third had a familiar theme: a 1-2-3 inning for Scherzer, including his third and fourth strikeouts. In the bottom of the inning Stevenson struck out swinging again and Difo was out on a bunt close enough to Moore for him to toss it to first for the out. But Moore did not escape the inning unscathed: Daniel Murphy knocked the sixth pitch of the at-bat into the visitors bullpen for his 20th home run.  A Zimmerman fly out ended the inning with the score 1-0, Nationals.

Scherzer finally gave up a hit in the fourth inning when Denard Span beat out a grounder to third. Panik doubled down the first-base line, sending Span to third. Hunter Pence then singled to center, scoring Span easily. Taylor threw a perfect strike in from center, hitting Panik’s batting helmet and Wieters’ glove at the same time. The ball knocked off Panik’s helmet as he was called out sliding toward the plate. When he got up, Span helped him back to the dugout. He continued playing, but the Nationals’ TV broadcasters noticed that he seemed a little off during the game: blinking and squinting as if trying to focus his eyes. Their concerns were valid: Panik went on the concussion DL two days later, returning August 25.3 It took Scherzer eight pitches, but he finally got Posey to pop up to Difo, who ran over the pitcher’s mound to catch the ball after Scherzer quickly got out of the way. Pablo Sandoval grounded out to end the half-inning. Moore worked a 1-2-3 bottom of the fourth on 12 pitches, leaving the score tied, 1-1.

Scherzer bounced back to strike out the side in the fifth. Moore was equally efficient in the bottom of the frame: two strikeouts (including a third strikeout of Stevenson) and a shallow fly out.

In the top of the sixth, Moore hit one well out to center but Taylor made a running catch. Span singled with a dunk into left but was caught stealing. Scherzer walked Panik on six pitches, then fell behind Pence 3-0. With the crowd standing and cheering in support, Scherzer battled back to strike out Pence. In the bottom of the frame, Difo was out on a comebacker and Murphy struck out looking. Again the Nationals pounced with two outs: This time it was Zimmerman homering into the visitors bullpen, bringing the score to 2-1, Nationals. Rendon lined out to end the inning.

In the seventh Posey grounded out, but Sandoval bounced one off the facing of the third deck in right to tie the game, 2-2. Scherzer then struck out the next two batters, bringing his day’s total strikeouts to 10. The Nationals went quietly in the bottom of the frame: a single, a strikeout, and a double play.

Scherzer was done for the day at 107 pitches, so Brandon Kintzler pitched a quick top of the eighth for the Nationals: three outs on thirteen pitches. Kintzler was a relatively new member of the Nationals: He was acquired, along with Ryan Madson and Sean Doolittle, just before the trade deadline to stabilize the Nationals’ bullpen.4 The Giants also had a new pitcher for the eighth: Corey Gearrin. Stevenson had better luck against Gearrin than he’d had against Moore: He managed a broken-bat single into center, then took second on an errant pickoff throw. But he was left there when none of his teammates had any success against Gearrin.

With the game still tied, Nationals manager Dusty Baker went to his closer, Doolittle, to pitch the ninth.  It did not start well: He gave up a single to Panik, then threw a wild pitch to Pence, allowing Panik to advance to second. Pence’s fly out advanced Panik to third. The Nationals chose to intentionally walk Posey to pitch to Sandoval, and Doolittle got him to pop up on the eighth pitch of the at-bat. With two out the crowd rose and began chanting “DOOOOOO” in support of their new closer. He responded by getting pinch-hitter Nick Hundley to fly out to left center. The Giants sent Hunter Strickland to the mound for the bottom of the ninth. He was roundly booed by the home fans, who had not forgotten his plunking of Harper on May 31 at AT&T Park. Posey moved to play first base with Hundley staying in to catch. The first batter to face Strickland was Rendon, who had homered against him in the first game of the doubleheader. Rendon could not repeat that in the nightcap: He was called out by first-base umpire Jerry Meals on a not-quite-checked swing. Although Strickland walked Kendrick, that was all the Nationals got, as a flyout and a strikeout left the score tied, 2-2, at the end of regulation.

Matt Albers got two quick outs in the top of the 10th, then finally got pinch-hitter Brandon Crawford to strike out on his ninth pitch. The Giants sent Albert Suárez to the mound. Five of his six relief appearances in 2017 had been multiple-inning appearances: a useful skill given this was the third game in less than 24 hours. He proceeded to strike out the side.

Albers continued pitching in the top of the 11th. Although he issued a two-out walk to Pence, he got the three outs he needed to send the game to the bottom of the 11th with the score still tied. Suárez proceeded to give up singles to Murphy and Zimmerman, with Murphy advancing to third on Zimmerman’s single. The Giants intentionally walked Rendon, perhaps because Kendrick had already struck out twice in the game. That strategy backfired: He hit Suárez’s sixth pitch into the visitors bullpen for a walk-off grand slam. It was the first grand slam of his 12-year major-league career. Of course, the team met him at home plate and administered the traditional Gatorade shower for walk-off heroes.

Video of game available at youtube.com/watch?v=rI_cGzrsc3Q.

1 Three Giants (Panik, Sandoval, and Parker) and two Nationals (Rendon and Zimmerman) played the full 29 innings of the three games. Honorable mention to the Giants’ Jones (26 innings) and the Nationals’ Stevenson (28 innings).

4 Mark Zuckerman, “Nationals ‘Really Like the Look of Our Bullpen’ After Latest Trade,” masnsports.com/nationals-pastime/2017/07/nationals-really-like-the-look-of-our-bullpen-after-latest-trade.html, July 31, 2017, accessed July 20, 2018. Kintzler signed as a free agent, while Madsen and Doolittle were acquired in a trade for Jesus Luzardo, Sheldon Neuse and Blake Treinen.