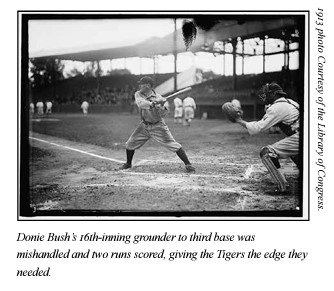 This Friday afternoon game was the final meeting of the year between the Washington Senators and Detroit Tigers. The Senators entered the game with a record of 61-49, locked in a three-team race for the American League pennant. At the start of play, they were 3½ games behind the league-leading Boston Red Sox and two games behind the second-place Cleveland Indians.

Although they were still in the running for the pennant, the Senators had given away a number of games during the weeks before their series with the Tigers, causing one sportswriter to refer to them as the champions of “baseball philanthropists.”1 The ninth-place Tigers were 48-60, 15½ games off the pace. Nearly a decade removed from their three consecutive American League pennants, the Bengals were playing out the string.

The weather was ideal for baseball. The afternoon high in reached 86 degrees in the nation’s capital with unseasonably low humidity for the mid-Atlantic region in August. Rookie Rudy Kallio drew the starting assignment for the Tigers. The 25-year-old right-hander was 7-11 with a 3.45 ERA. He was opposed by left-hander Harry Harper. In his sixth major-league season, the 23-year-old “veteran” was 10-7 with a 1.86 ERA.

After keeping the Tigers off the scoreboard in the top of the first inning, the Senators scored five runs off Kallio in the bottom half of the inning. Left fielder Burt Shotton led off with a double to left. After Eddie Foster and Joe Judge were retired on fly balls to Ty Cobb in center field, Clyde Milan hit a single that advanced Shotton to third. Milan stole second ahead of Frank Schulte’s double that plated the game’s first two runs.

Second baseman Howie Shanks followed with a single to center that scored Schulte. Shanks took second on Cobb’s throw to the plate. Shortstop Doc Lavan followed with an RBI single and moved up to second when Tigers catcher Tubby Spencer failed to corral Cobb’s attempt to nail Shanks at the plate. Lavan scored when catcher Eddie Ainsmith tripled. Harper, the ninth batter of the inning, ended it by striking out.

Down 5-0, Tigers manager Hughie Jennings turned to right-hander Deacon Jones in the bottom of the second to keep the game close. For the next five innings, Jones, who entered the game with a record of 3-1 and a 4.39 ERA, “was the rock upon which the Nationals split,” setting them down “almost as fast as Griff’s men came to the plate.”2

The Senators broke through against Jones for what appeared to be an unnecessary insurance run in the seventh inning. Foster led off with a double. After Judge grounded out, Milan singled to score Foster. Jones retired Schulte and Shanks to end the inning. In the end, Jones did exactly what was asked of him as he scattered seven hits over seven innings and gave up only one run.

Behind 6-0, the Tigers looked destined to go down in defeat as the game entered the top of the ninth inning. However, “[T]he Griffs did enough unproductive and non-essential work in the ninth inning … to be sentenced to the rock pile for life.”3

Jennings sent pitcher George Cunningham up to pinch-hit for Deacon Jones, who was to lead off the inning. Cunningham delivered a single and proceeded to steal second “with no one making an effort to cut him down.”4 After Harper struck out Donie Bush for the first out, Bob Jones singled Cunningham to third. Cobb followed with a groundout to second and the Senators were content with trading an out for a run as the Tigers scored their first run and Jones moved to second. The Tigers were now down to their last out.

Bobby Veach tripled to the right-field scoreboard to score Jones who had stolen third, again without a throw. Art Griggs followed with a single to center that scored Veach, narrowing the Senators’ lead to 6-3. George Harper singled to right and second baseman Ralph Young drew a walk to load the bases before Spencer singled to center to drive in Griggs and Harper and trim the deficit to a single run. At this point, Senators manager Clark Griffith had “reached the same conclusion as every fan in the park – that Harper would never be able to get the side out.”5

With the Tigers already having batted around, Griffith called on veteran Jim Shaw to preserve the victory. Griffith’s decision to bring in the right-hander was widely questioned, especially given the fact that Shaw had experienced a ninth-inning meltdown against the Tigers only two days earlier and that Walter Johnson was also available to pitch.6 Shaw entered the game with a record of 11-12 and a 2.82 ERA.

Handicapped by chronic control problems throughout his career,7 Shaw walked Cunningham to load the bases and then walked Bush to force in Young with the tying run. The inning came to an end when Bob Jones grounded out to second. The Tigers had come back from five down with two outs in the ninth inning.

After starting the Tigers comeback rally in the ninth, Cunningham remained in the game to pitch. The right-hander, who was 4-4 with a 3.42 ERA, was nothing short of fabulous. He retired the Senators in order in his first four innings and gave up only two hits over his eight innings of work. His performance was even more impressive given the fact that he had tossed a complete game, albeit in a losing effort, against the Senators the day before.8

Walter Johnson came on to pitch for the Senators in the top of the 10th inning. The right-handed Johnson had already won 20 games that year – the ninth year in a row he had won 20 or more games – against 12 defeats. “Walter had the Tigers eating out of his hand all the way” until the 16th inning when he was victimized by poor defense.

George Harper led off the inning with a groundball to Foster at third. Foster’s throw to first base ended up in the Washington dugout and Harper took second. Harper went to third when Young reached on a “lucky swinging bunt.”9 Spencer followed with a fly ball to center that advanced Young to second as Milan’s throw held Harper at third. Cunningham struck out for the second out of the inning. It appeared that Johnson and the Senators were out of trouble when Bush hit another grounder to Foster at third. However, the Washington third baseman “got tangle footed and threw wide to Ainsmith, Harper and Young scoring.”10 Bob Jones flied out to Shotton in left to end the inning.

The Senators did not go quietly in the bottom of the 16th. After Schulte grounded out to second to start the inning, Shanks reached on an error by Tigers second baseman Young. Lavan singled, advancing Shanks to third. Ainsmith hit a fly ball to left to drive Shanks home and trim the deficit in half. That brought Johnson to the plate. Johnson was a good hitter, but this time he sent a fly ball to Cobb in center to end the game.

Cunningham earned the victory and improved his record to 5-4. Johnson, who allowed only two scratch hits in seven innings, deserved a better fate. With the loss he dropped to 20-13. The time of the game was 3 hours and 22 minutes.

The loss was another major blow to the Senators’ pennant hopes, dropping them 4½ games off the pace. Despite winning 11 of their final 15 decisions, the Senators settled for a third-place finish. It was not until 1924 that the Senators would again contend for the pennant. That year they won their first American League pennant and went on to win the World Series.