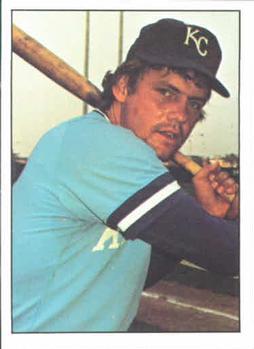 The Kansas City Royals had developed from an expansion franchise in 1969 to a division contender in the American League Western Division by the mid-1970s. The Royals had had given the powerful Oakland Athletics a challenge for the division crown in 1975 but despite 91 wins, they came up seven games short of the A’s.1

Kansas City assumed the lead in the AL West on May 18, 1976,2 and as the season wore through the dog days of summer, the Royals, with a record of 71-45, led the second place A’s by eight games before the start of play on August 17.3

That the Royals were leading their division was not top of the news in Kansas City in mid-August 1976. The Republican National Convention was being held at Kemper Arena. Future President Ronald Reagan was challenging incumbent President Gerald Ford for the GOP nomination4 Perhaps that explains why a relatively sparse crowd of 14,836 was in attendance in Royals Stadium on the evening of August 17.5

The Royals’ opponent, the Cleveland Indians, were in third place in the AL East with a 57-59 record and trailed the division-leading Baltimore Orioles by 13½ games.6 The Indians were managed by player-manager Frank Robinson and had a lineup that featured some aging veterans in first baseman Boog Powell and designated hitter Rico Carty along with some youngsters, including outfielder Rick Manning and third baseman Buddy Bell.

Bird took the mound for the Royals and veteran Pat Dobson started for the Indians on that hot August evening. Both pitchers navigated the first two innings with little trouble. In the top of the third, doubles Bell and Frank Duffy plated the Indians’ first run. The Royals came back in the bottom of the inning to tie the game on a single, wild pitch, and two more singles, the run-scoring hit off the bat of Frank White.

Kansas City took a 2-1 lead in the fourth on a double by Brett followed by singles by first baseman John Mayberry and McRae. The Royals tacked on an insurance run off Dobson in the seventh on a single by Patek, a sacrifice, a groundout, and a single by Otis.

After catcher Buck Martinez popped out to shortstop Duffy to end the bottom of the eighth, some of the crowd headed toward the exits confident of another Royals win.

Bird had been solid through eight innings, allowing just a lone run on five hits and two walks. After starting the ninth by retiring Manning on a fly ball to center, Bird walked Indians right fielder Tommy Smith and gave up a single to Carty. Bird gave way to reliever Steve Mingori. Larvell Blanks, pinch-hitting for Powell, grounded to short but a throwing error by Patek allowed Smith to score and pinch-runner Rick Waits to advance to third. Littell relieved Mingori and gave up a single to George Hendrick that plated the tying run. Littell escaped further damage with a strikeout of Bell and a groundout by John Lowenstein.

The Royals went quietly in the bottom of the ninth against reliever Dave LaRoche, as did the Tribe in the top of the 10th against Littell.

Otis flied to center to start the bottom of the 10th against LaRoche.Then things started to get interesting when Brett singled to left. Rookie Rick Cerone, appearing in just his 10th major-league game,7 had entered the game to catch in the ninth. With Mayberry at bat, Brett took advantage of the rookie and stole second base, and when Cerone’s throw sailed into center field, Brett took third.

With the winning run just 90 feet away, Mayberry struck out. That brought up veteran infielder Dave Nelson with a chance to win the game. Nelson had entered the game in the eighth as a pinch-runner for McRae and had remained in the game as the designated hitter.

With a 1-and-1 count on Nelson and with the left-handed LaRoche pitching from a full windup, Brett made a break for home.8 The future Hall-of-Famer easily slid into the plate with the winning run, completing one of the rarest of plays in the modern major leagues: the walk-off steal of home. As 1976 was before the age of the Internet and SportsCenter, only a fortunate few actually got to see the remarkable play. Less fortunate still were those who left the stadium two innings earlier trying to beat the traffic.

The Royals continued to lead in the AL West throughout the remainder of the 1976 season, holding off the A’s to win the division by 2½ games.9 They would go on to lose the best-of-five American League Championship Series to the New York Yankees, three games to two.10

George Brett stole home twice more in his career, both as part of double steals. Neither was a game-winner.11

The Royals’ 4-3 win over the Indians was this author’s second in-person major-league game. The first was the Kansas City’s 6-1 victory the previous evening.