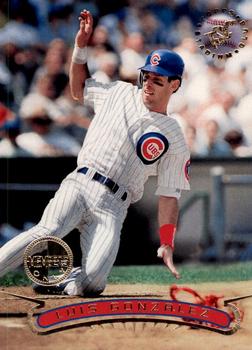 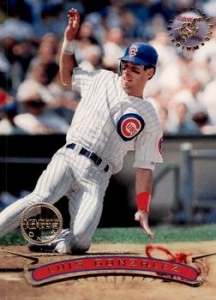 August 18, 1995, was a warm day in Denver. Thunderstorms popped up before game time and a fine mist lingered until after the game started. It was very unusual during the early years of the Colorado Rockies for them to start a game when precipitation was falling. However, this time it was decided to start because the Rockies’ own weather forecasting service assured them that if they started on time, they had a large enough window to get the game in.

So, at 7:06 P.M. Mountain Time, the first pitch was thrown by Bret Saberhagen to Brian McRae of the Chicago Cubs. Saberhagen had been acquired at the July 31 trade deadline as the Rockies felt they were playoff contenders. As it turned out, they would become the National League wild-card winner in 1995.

The first pitch was a strike called by home-plate umpire Gerry Davis. On the second pitch, McRae hit a bunt single short of the second baseman, Eric Young Sr. Two batters later, Mark Grace drove in McRae with a ground double past third base. Sammy Sosa walked on five pitches and then Luis Gonzalez hit a three-run home run into the left-field stands. The homer was measured at 370 feet.

It didn’t get much better for Saberhagen; he faced four more batters and was relieved by Lance Painter after facing all nine Chicago batters in the first. Saberhagen was charged with seven earned runs in one-third of an inning, the shortest outing among 304 starts of his career to this point.

The Rockies scored once in the second inning on Andres Galarraga’s 433-foot home run. After that the Cubs scored twice in the top of the third on back-to-back doubles by Scott Servais and Anthony Young and another single by McRae. That was all the game scoring until the top of the fifth.

In the top of the fourth, or more specifically, after the bottom of the third, the skies opened and dumped rain like a cow relieving itself on a flat rock. This caused a 2-hour and 45-minute rain delay. At the start of the game, the temperature was 87 degrees and there were 50,054 people in attendance, 48,082 paid. After the rain delay, the temperature was 71 degrees and most of the crowd had left. While the grounds crew was getting the field back in playing condition, the Rockies invited the remaining few thousand fans to enjoy the game behind home plate in the lower section. The cleaning staff then spent the rest of the game cleaning the other seating sections.

When the game resumed, David Nied was pitching for the Rockies. He was the first player taken by the Rockies in the 1992 expansion draft. He faced 10 Cubs batters and allowed another five runs. He got through the fourth inning allowing only a double and subsequent walk. However, in the fifth, he allowed the first three batters (Young, McRae, and Jose Hernandez) to hit singles, scoring one run. This was followed by a force out that scored a run, Sosa’s single, and a double by Gonzalez, which scored two more runs. Nied was relieved at that time by Steve Reed, who allowed a 407-foot, two-run home run to right-center field on the fourth pitch he threw to Howard Johnson. This made the score 15-1 in favor of Chicago.

In the bottom of the fifth, the Rockies got another run on a leadoff double by Jason Bates and an RBI single by Dante Bichette.

The Cubs’ offense did not slow down significantly in the top of the sixth inning. They scored another three runs off Reed. Young, the Cubs pitcher, led off and beat out a groundball to third base. McRae and Shawon Dunston struck out swinging but Grace walked. Sosa scored Young with a single to left and put Grace on third. Gonzalez’s single to center field scored Grace as Sosa went to third. Todd Zeile singled to left field, sending Sosa home and Gonzalez to third. This inning’s merry-go-round came to a halt when Rey Sanchez grounded out to Galarraga at first. The inning ended with the score 18-2.

Against new Chicago reliever Terry Adams in the bottom of the sixth, the Rockies scored two runs, mostly on small ball, to make it 18-4. Vinny Castilla singled to third and in a force attempt on Joe Girardi’s grounder to shortstop, second baseman Todd Haney dropped the ball. Munoz walked to load the bases and Bates singled, driving in Castilla and Girardi.

After the Rockies scored those two runs in the sixth, the Cubs must have been feeling like their lead was in jeopardy, as they added four runs in the seventh inning. Servais walked and Haney singled him to second. Scott Bullett doubled, scoring Servais. Hernandez and Grace made outs, but the always dangerous Sosa hit a 432-foot home run to center field, 22-4 Cubs.

During the seventh-inning stretch, after everybody had sung “Take Me Out to the Ball Game,” a leather-lunged fan stood up looked toward the Cubs television booth and hollered, “You still awake, Harry (Caray)? It must be past your bedtime.” It was after midnight by now.

The Rockies scored three runs in their seventh. Mike Kingery drove in Bichette with a single, and after Castilla singled, pinch-hitter Bryan Hickerson smashed a two-run triple. Those were the Rockies’ final runs of the game.

The Cubs were not through. They scored four more in the eighth off Hickerson, the new pitcher. Three of them came on a bases-loaded triple by Bullett, driving in Joe Kmak, Servais, and Haney. Bullett then scored on a grounder to shortstop by Hernandez. That made the score 26-7. Darren Holmes, the usual closer, pitched the ninth inning, struck out two, and ended the Cubs’ fun by allowing a long fly to right-center which was caught by Kingery. The Rockies went three up and three down in the ninth against Randy Myers to end the game at 1:13 A.M. after 7 hours and 7 minutes, with the actual time of the game 3 hours and 22 minutes.

After the game, Grace said, “They could have thrown Bob Feller tonight and we were going to hit him. It was our night.”1 Cubs manager Jim Riggleman was empathetic in saying, “That stuff (blowout games) doesn’t do anything for me. I liken it to a 500-foot home run versus a 370-foot home run. It’s still one run. And that was still one win.”2

When all was said and done, the Rockies suffered their worst defeat in their short history, and it continued to be so as of the end of the 2018 season. The Cubs, on the other hand, only matched their modern team record for runs, set on August 25, 1922, against Philadelphia.

The Cubs’ Luis Gonzalez was the offensive “star” with six runs batted in via a home run, single, and double. Scott Bullett, who didn’t enter the game until the sixth inning, had four runs batted in. Sosa, who started, had four runs batted in on his three singles and home run. The Cubs got 27 hits, one less than their modern team record of 28. They had seven doubles, one triple, three home runs, and 45 total bases. Each team used 20 players in the game.

I scored this game from the Coors Field press box for Baseball Workshop.

In addition to the sources cited in the Notes, the author relied upon Baseball-Reference.com, Retrosheeet.org, and his meticulous Baseball Workshop scorecard.