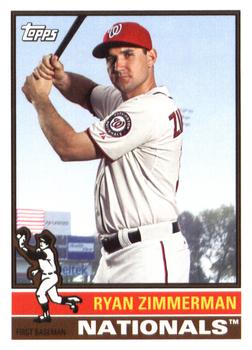 It is the most dramatic of baseball plays, the walk-off home run. The exuberance of the hometown fans is immediate as the batter begins to circle the bases. Amid the gathering of an excited and victorious team, the home-plate umpire waits stoically to ensure that all runners have touched the plate. Game over!

As noted by Paul Dickson, “[walk-off] was coined by Oakland Athletics pitcher Dennis Eckersley for that lonely stroll from the mound after a pitcher gives up the winning run (Gannett News Service, July 30, 1988)”1 Eckersley’s use of the term had a rather negative connotation marking the losing pitcher as he leaves the field after yielding a home run.2 Common usage evolved to highlight the achievement of the batter and the celebratory mood of the winning team and its fans, regardless of how the walk-off was achieved.

Larry Granillo’s study, “Walking Off,” defines a walk-off victory as “a run-scoring event in the bottom half of the last inning of the game that gives the home team a winning margin.”3 His analysis indicates that there have been 9,887 games ending in a walk-off fashion in the Retrosheet era. Of those events, 2,729 occurred with a home run; 4,805 occurred with a single. Granillo notes that the Phillies have suffered the most walk-off defeats, 309, of any major-league team.

Walk-offs happen frequently, but never get routine for the hometown fans. By the time the 2015 season had rolled around to the “dog days,”4 Nationals fans had already celebrated eight walk-off victories by all matter of means — three wins by homers, two by singles, one by a sacrifice fly, one by a fielder’s choice, and one by a wild pitch.

The Phillies came to Washington for a three-game series in first place, 8½ ahead of the Atlanta Braves. In fact, they were in first place for every day of the season except for April 26. The pitching matchup pitted Livan Hernandez (7-11, 4.21 ERA) for the Nationals against Roy Oswalt (5-7, 3.84 ERA) for the Phillies. Despite the looming bad weather, the game started on time. Hernandez managed just nine pitches in the top of the first inning before the rain descended, delaying the game for 2 hours and 22 minutes.5 Hernandez returned to the mound after the delay, but the Phillies decided that Kyle Kendrick (7-5, 3.25 ERA) would replace Oswalt before he threw a single pitch.

The Phillies struck first with one out in the top of the third inning for three runs on five consecutive hits by Jimmy Rollins (double), John Mayberry (triple), Chase Utley (double), Ryan Howard (single), and Hunter Pence (single). With two outs, they added another run when Carlos Ruiz singled home Howard with Raul Ibanez, on base on a fielder’s choice, advancing to second. It could have been worse if not for Jayson Werth’s right arm. When Wilson Valdez singled to right, Werth’s throw nailed Ibanez at the plate to end the inning.

The Nationals cut the lead to 4-2 with single runs in the third and fifth innings. In the third Wilson Ramos singled off Kendrick and was sacrificed to second base by Hernandez. He scored the first run when Ian Desmond doubled to deep center field. In the fifth inning, Ramos hit his 10th home run of the season for the second run. That ended the excitement for Nationals fans until the ninth inning.

The call to the bullpen brought Phillies closer Ryan Madson to the mound for another ninth-inning save opportunity. His 23rd save in a 13-pitch inning on the previous night gained a 4-1 victory for the Phillies over the visiting Arizona Diamondbacks. But he was also pitching for the third consecutive day. To open the ninth on this night, he was facing ex-teammate Jayson Werth for the first time in his career. Werth was well on his way to leading the National League in 2011 with 4.37 pitches per plate appearance.6 Werth was quickly down 0-and-2 in the count. Over the next eight pitches, Werth fouled off five in between taking three balls. “Finally, with the count 3-2, Werth looked for a fastball, and lined a 95-mph heater into left field.”7

Was Madson unnerved by Werth’s at-bat? Consecutive singles by Danny Espinosa and Jonny Gomes followed to score Werth and cut the Phillies’ lead to 4-3. After Wilson Ramos sacrificed the runners to second and third, Madson intentionally walked pinch-hitter Jesus Flores to load the bases. Ian Desmond’s fly ball dropped behind deep second base, scoring Espinosa to tie the game and leaving the bases loaded. Madson got Rick Ankiel on a swinging strikeout for the second out.

As Ryan Zimmerman came to the plate, Ryan Madson was moving into uncharted territory. He had already thrown 32 pitches in the inning and had not done so since nearly three years ago in this very same ballpark.8 On a full count, Madson threw an inside fastball at 92 mph, which Zimmerman deposited down the left-field line for the eighth walk-off home run of his career. Since he made his major-league debut in September 2005, Zimmerman has more game-ending homers than any other major leaguer.9 In a few years’ time, Zimmerman was dubbed “Mr. Walk-Off” by MASN, the network that carries Nationals games, after hitting his 10th game-ending home run against the New York Yankees on May 19, 2015.10

Jayson Werth, Livan Hernandez, and a trio of relievers were the unsung heroes on this night, helping to swing the game in their team’s favor. Werth nabbed a runner at the plate with his throw from right field and won the classic confrontation of batter-pitcher with Ryan Madson. Livan Hernandez persuaded manager Davey Johnson and pitching coach Steve McCatty to let him take the mound after the long rain delay. Washington Times writer Amanda Comak estimated that the rubber-armed Hernandez threw over 300 pitches before the night was over, including the pregame bullpen session, four sessions in the pitching cage during the long rain delay, and the game itself.11 His four innings of work allowed the bullpen combination of Tom Gorzelanny, Sean Burnett, and Todd Coffey to combine for five innings of one-hit baseball, setting the stage for the heroics of Ryan Zimmerman. The walk-off win — never routine, always exciting!

On June 23, 2011, the author celebrated another walk-off victory with other fans in Section 211 at Nationals Park. Pinch-hitter Laynce Nix hit a sacrifice fly to short left field off Seattle’s Chris Ray for the game’s only run. A similar celebration took place on July 1 after the Nationals’ 2-1 walk-off win against the Pirates. Matt Stairs’ pinch-hit single to right field scored pinch-runner Alex Cora with the winning run.12 Well past midnight on this night, the celebration was more subdued during the drive home on the George Washington Parkway. We settled for a dramatic radio call of another walk-off home run by Ryan Zimmerman.

The author accessed Baseball-Reference.com for box scores/play-by-play information (baseball-reference.com/boxes/WAS/WAS201108190.shtml) and other data, as well as Retrosheet.org (retrosheet.org/boxesetc/2011/B08190WAS2011.htm). The lineup card from the Phillies dugout is part of the author’s baseball memorabilia collection. 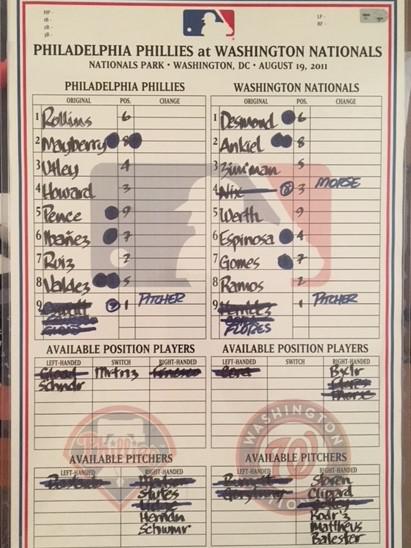 2 Although unconfirmed by the author, it is quite possible that Dennis Eckersley was referring to the Oakland-Seattle game at the Kingdome on July 29, 1988. Eckersley came into the game in the 10th inning seeking his 31st save of the season with the A’s leading 3-2. Instead, Steve Balboni hit a three-run, game-winning home run for the Mariners and the walk-off began.

4 Paul Dickson, The Dickson Baseball Dictionary, 3rd Edition (New York: W.W. Norton & Company, 2009), 262: “The late summer or September of a baseball season. “The time of the year when the weather is hot, the body tired and, for the handful of teams that aren’t close to the wild card, the games meaningless” (Stephen Cannella, Sports Illustrated, August 20, 2001, 61).”

8 The Phillies lost to the Nationals, 9-7, on September 3, 2008, at Nationals Park. Madson threw 32 pitches in two innings that included striking out the side in the sixth.

12 The July 1 game was the first home game for new Nationals manager Davey Johnson. Jim Riggleman resigned after the June 23 game in a contract/salary dispute.