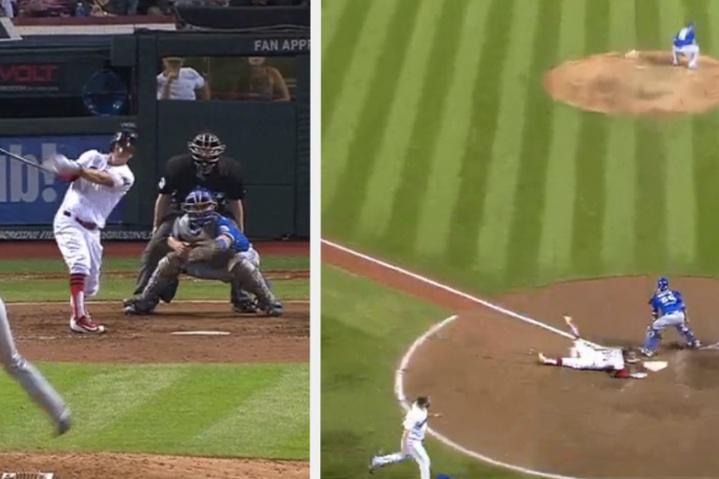 “Unbelievable finish for the @Indians!! WOW. Wonderful atmosphere in there tonight.” — LeBron James1

On August 19, 2016, the Cleveland Indians were battling the Toronto Blue Jays on a Friday evening at Progressive Field in downtown Cleveland. A crowd of 30,655 jammed the stands for the opener of a three-game set between the Indians and Jays. Not only were both clubs battling for a playoff spot, but each team also was in first place in its division. Toronto held a 1½-game lead over both Baltimore and Boston in the AL East. Cleveland had more of a cushion, a full six games ahead of Detroit in the AL Central.

At the end of the day on June 16, the Indians led Kansas City by a half-game, Detroit by 1½ games and Chicago by 2½ games. But starting on June 17, Cleveland reeled off 14 wins in row, a franchise record. The last win in the string lasted a marathon-like 19 innings at the Rogers Centre in Toronto. Carlos Santana’s solo home run off Darwin Barney, normally a middle infielder, was the difference. Cleveland used nine pitchers while Toronto sent 10 pitchers to the hill, including two position players, Barney and Ryan Goins. Cleveland’s lead ballooned to seven games over Kansas City.

Indians starter Trevor Bauer served up a two-run homer to Russell Martin in the first inning. Toronto led 2-0, but Bauer was stingy the rest of the way. He struck out a career-high 13 batters and scattered four hits in eight innings of work. Toronto starter Francisco Liriano was equal to the task. The southpaw went six innings, rang up seven K’s, and scattered four hits. He retired 10 straight Cleveland batters at one point. Liriano surrendered an unearned run in the sixth inning on a passed ball and a fielding error on the second baseman.

Toronto’s bullpen held the lead, and Jays skipper John Gibbons brought in his closer, Roberto Osuna, to finish the game in the ninth. The right-handed Osuna had 27 saves to his credit. But no closer is infallible. With one out, Jose Ramirez lifted a home run to right field to knot the game, 2-2. Rookie Tyler Naquin stepped to the plate and with the crowd on its feet, cheering rabidly, Naquin also lifted a fly ball to right field. “I was just thinking after I hit it, I took a couple of steps out of the box and just pictured it kicking off the wall,” said Naquin. “I thought, ‘I have a chance to score if it kicks far enough.’ And sure enough, it did.”2

Indeed, it did. Right fielder Michael Saunders drifted back to the wall but could not come up with the baseball. The ball bounded to right-center field, where center fielder Melvin Upton Jr. gave chase. As Upton retrieved the ball, he slipped and fell, and heaved the ball toward the infield from a prone position. By this time, Naquin was heading to third and was given the wave home. As his teammates hurried from the third-base dugout, they were seemingly running beside Naquin. He dived head-first across home plate, well ahead of the tag, to secure the 3-2 Indians win. “That was a pretty cool moment,” Naquin said. “I almost fell down there for second. I wanted to just keep running.”3

“That was exciting, that’s for sure,” said Indians manager Terry Francona. “I thought even going into the ninth, it’s not good to be down one, but I thought it was a heck of a game, both sides. Good pitching, good crowd excitement, good baseball. To see the way it ended makes it way better.”4

The inside-the-park walk-off homer was the second such round-tripper in Indians history. On August 13, 1916, just more than 100 years earlier, Cleveland Naps outfielder Braggo Roth accomplished the feat. His solo homer off the St. Louis Browns’ Earl Hamilton gave his team a 4-3 win. Roth who went 4-for-4 in the game, sent a bullet to center field that soared over the head of outfielder Armando Marsans. Like Naquin, Roth fled around the bases as the hurried relay throw went astray. According to an account in the Cleveland Plain Dealer, the crowd at League Park, as well as the rest of the Cleveland club, whooped it up in total jubilation.

It was not the last time Cleveland and Toronto would meet in 2016. The Indians toppled the Blue Jays in the AL Championship Series in five games and won their first pennant since 1997.

Exactly two months after the Cleveland Cavaliers won their first world championship, LeBron James was taking in the ballgame. Indeed, the game was fit for a King.

In addition to the sources mentioned in the Notes, the author consulted baseball-reference.com, and retrosheet.org.