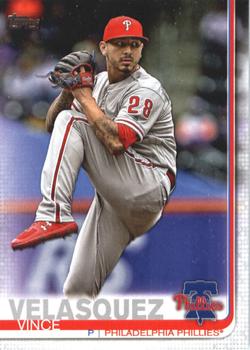 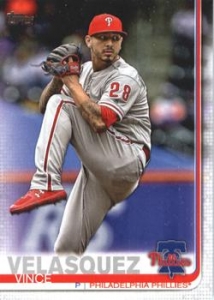 At first glance the box score doesn’t look unusual except for the number of innings: 4-3, White Sox, with 12 hits and one error for each team. Look at the winning and losing pitchers’ records (1-0 and 0-1) and you might think you were seeing an early April game or a pair of September call-ups. No, the losing pitcher was a center fielder and the winning pitcher (despite pitching 41⅓ innings in 35 games) hadn’t earned a decision in 2019.1 Stick around: There’s more history to be made.

The game started normally enough on a humid 80-degree evening in Philadelphia. Jason Vargas (6-5, 4.01 ERA) took the mound for the Phillies (57-51, hoping for a wild-card berth,2 seven games behind the Braves in the NL East). Vargas had arrived in a trade from the Mets on July 29 just before the trade deadline so this was his first start as a Phillie. Leury García singled on the first pitch. Tim Anderson and José Abreu each grounded into force plays at second. Eloy Jiménez singled but James McCann lined out to give Vargas a successful first inning with his new team.

Iván Nova (6-9, 5.23 ERA) was pitching for the White Sox (46-60, a distant third in the AL Central, 19 games behind the Twins). César Hernández got the home half of the first inning started with a single into left. Jean Segura struck out swinging at a ball already in the catcher’s mitt. Rhys Hoskins doubled down the first-base line: The ball landed just fair, bouncing off the side wall as the ball girl scrambled out of the way. Bryce Harper stepped up to a chorus of Phillie Phan boos … because the White Sox intentionally walked him, setting up for a double play. They got it: J.T. Realmuto grounded into a double play on the first pitch.

Nothing worth mentioning happened in the second.

In the top of the third Nova kept his .000 BA intact by striking out. García grounded to third: A great play by Scott Kingery and first baseman Hoskins got the out. After Anderson doubled down the third-base line, Abreu homered halfway up the stands: 2-0, Sox. Jiménez grounded to third to end the frame.

Roman Quinn returned the favor in the bottom of the third, sending his third homer of the year into the second deck. Quinn had seen only limited playing time: Although this was the 98th game of the season, it was only his 33rd. His homer was all for the Phillies: Hernández flied out, Segura chopped back to the mound, and Hoskins struck out.

The top of the fifth passed quickly as well: Yolmer Sánchez hit a sky-high foul popup, Hernández robbed Nova of his potential first 2019 hit3 with an excellent catch behind second, and García struck out.

Adam Haseley flied out to open the home half of the fifth. Vargas got a base hit but was erased at second on Quinn’s liner. With Hernández batting, Quinn stole second (he was 5-for-5 for the season), but Hernández grounded to first to leave him there.

The sixth started with a leadoff base hit by Anderson; but after Abreu flied out to left, Jiménez grounded into a double play.

The Phillies evened it up in the bottom of the sixth. Segura singled, Hoskins walked. Jace Fry replaced Nova to face Harper: perhaps a matchup choice since Fry was a lefty and Nova was only at 78 pitches.4 Harper hit the ball to right but not far enough to avoid a force out at second. Shortstop Anderson, trying for a double play, side-armed the ball past first into the dugout. allowing Harper to take second. Meanwhile Segura scored, tying the game. The third pitcher of the inning, Jimmy Cordero, struck out Realmuto. Harper stole third easily while Cordero wasn’t looking. Cordero hit Kingery on the hip with a two-strike fastball. With Haseley batting, Kingery stole second, but Haseley struck out to end the inning with the score still tied.

The White Sox’ fourth pitcher, Aaron Bummer, struck out pinch hitter Corey Dickerson on three pitches. This was Dickerson’s first at-bat with his new team, having been traded from the Pirates at the trade deadline. Dickerson was the last left-handed Phillies bench batter. Quinn bunted just up the first-base line: He was safe with no throw attempted. With Hernández batting, Quinn stole second, evading a swipe tag with a brilliant swim move. The call was challenged, but a 37-second review indicated that “safe” was clear. Sánchez tried to field Hernández’ grounder, but lost the handle on the ball so all hands were safe at first and third. Segura singled, scoring Quinn. Hoskins was intentionally walked to load the bases. Bummer struck out Harper and Realmuto to escape the jam, but the Phillies led, 3-2.

Sánchez started the eighth with a stand-up triple into the left-field corner off Nick Pivetta. The requested crew chief review confirmed that the ball had landed fair. His effort was wasted as Ryan Cordell5 chopped to the edge of the grass, García struck out, and Anderson lined out.

In the bottom of the inning, the Phillies managed to load the bases with one out against Evan Marshall, but pinch-hitter Sean Rodríguez looked at strike three and Segura grounded out to leave the score unchanged.

With their usual closer Hector Neris suspended, Juan Nicasio pitched the ninth for the Phillies. Jiménez hit a one-out double. After McCann struck out on the 10th pitch and Goins singled, Matt Skole6 stepped in as a pinch-hitter. Two strikes, two outs – and Skole singled for his first hit of 2019, tying the game. The Phillies fans expressed their displeasure loudly. Sánchez struck out.

All Alex Colomé allowed in the bottom of the ninth was Realmuto’s two-out double. On to extras!

Blake Parker made his second relief appearance for Philadelphia after being acquired from the Twins. He probably impressed his new team with his one-two-three inning on 15 pitches. José Ruiz pitched the bottom of the 10th to the same result on 16 pitches.

Parker finished his solid relief outing with another one-two-three inning in the top of the 11th.

Ruiz also continued pitching in the 11th. The Phillies’ pinch-hitter was reserve catcher Andrew Knapp, the last man on the bench. He popped up for the first out. Segura walked. Hoskins flied out and Harper struck out. The White Sox TV broadcasters mentioned that Phillies manager Gabe Kapler had to look ahead when managing his bullpen, since Ross Detwiler, the next game’s starter, didn’t typically last that many innings.7

The top and bottom of the 12th and the top of the 13th were one-two-three frames.

The Phillies got two on in the bottom of the 13th but didn’t score. Vince Velasquez entered as a pinch-runner for Zach Eflin who had pitched the 12th and 13th for the Phillies but couldn’t continue, admitting to his manager that his tricep was sore.8

Velasquez could not pitch in the 14th: He had thrown a bullpen earlier that day. The remaining pitcher in the bullpen, Ranger Suárez, couldn’t get loose. That left Kapler with one option: Center fielder Quinn would make his third pitching appearance for the Phillies and Velasquez would play left field – a position he last played in the Junior Olympics.9 Quinn walked Abreu. Jiménez lined to third. The throw got away so Abreu took second. Goins was intentionally walked. As the clock struck midnight in the East, McCann bounced one to left, but Velasquez fired a strike to home to throw out Abreu at the plate. Carson Fulmer, the White Sox pitcher, had his first major league at-bat – against a center fielder. He hit a bullet down the third-base line: Kingery dived for the ball and threw him out at first. Fulmer injured his hamstring trying for the hit.10

Josh Osich pitched a one-two-three bottom of the 14th. Harper lined out, so he was 0-for-6.

Quinn got two groundouts in the top of the 15th followed by a single and a walk. Abreu singled to left. Velasquez made another strong throw to the plate, but after review the runner was safe: 4-3, White Sox. Jiménez lined to left: Velasquez made a diving five-star catch to end the inning.11

It was up to Osich to hold the score. He did it. Haseley and Franco grounded out. The remaining crowd from the 26,635 fans gave Quinn a standing ovation. He looked at strike three to end the game.

There were two historic performances in this game: Quinn’s pitching, homer, and two stolen bases (first time in the modern era for that combination); and Velasquez’s outfield assist as a pitcher (first time since 1950) and his five-star catch – the first for a Phillies player in 2019.12

In addition to the sources listed in the notes, the author consulted Baseball-Reference.com and Retrosheet.org, and viewed the broadcast on MLB.com.

1 He earned three more in September, finishing at 4-0 in 57 games with 67⅔ innings pitched.

3 In his nearly three years in the National League, Nova had accumulated five hits in 126 at-bats for a .040 BA. He was still looking for his first 2019 hit. He did not get it: five plate appearances, and this was the only one in which he didn’t strike out.

4 It was not unusual for him to throw more than 100 pitches.

5 Cordell, in to play right field, had replaced Cordero in the top of the seventh as part of a double switch.

6 Skole had arrived in Philadelphia earlier in the day.