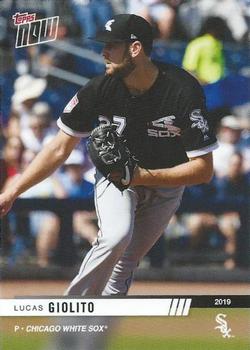 The 31,389 fans attending this Wednesday midday game could expect a pitcher’s duel: Two first-time All-Stars were taking the mound, both with solid 2019 performances. The White Sox and Twins had split the first two games of the series: The Twins put up seven runs in the eighth inning the night before to win 14-4. It was a beautiful sunny day, the last weekday game before school would be starting, encouraging families to attend. The Twins were 77-49, leading the AL Central (which they won, but lost 0-3 to the Yankees in the AL Division Series), while the White Sox were 56-69, a distant third, 20½ games back of the Twins.

Jake Odorizzi (13-5, 3.50) took the mound to face Leury García, who singled up the middle. Next up was Tim Anderson1 (15-for-30 over the last week), who also hit one up the middle. There was no force out at second because shortstop Jorge Polanco didn’t tag the bag with his foot after he grabbed the ball. Anderson beat the throw to first. Polanco was charged with an error, his sixth in his last eight games. José Abreu singled into left between the fielders, giving the White Sox a 1-0 lead before an out was recorded. Odorizzi finally got an out when James McCann struck out. A wild pitch to Matt Skole rolled to the dugout, allowing the runners to advance. Skole’s broken-bat single over the second baseman’s head scored a second run. Twins catcher Jason Castro paid a mound visit: Whatever he said worked because Eloy Jiménez grounded into a double play to end the scoring opportunity.

Lucas Giolito (13-6, 3.41), staked to a 2-0 lead, got Max Kepler to pop out. Polanco bunted on the grass up the third-base line for a single. But he was left on first when Nelson Cruz and Eddie Rosario struck out. Rosario spun completely around trying to hit a changeup.

Odorizzi had a much easier time in the top of the second. After Ryan Goins struck out, Yolmer Sánchez hit a foul pop beyond third base that Polanco was able to catch while sprinting over from short. Adam Engel grounded out so Odorizzi was out of the inning on 11 pitches with the score unchanged. Giolito was even more efficient in the bottom of the second: only nine pitches for three outs. Miguel Sanó tapped the first pitch back to the mound, Luis Arraez looked at strike three, and Jonathan Schoop flied out to center.

García singled into the left-field corner to start the third inning. Thinking he might have a double, he made a wide turn at first only to hit the dirt and scramble back to first as left fielder Rosario threw a perfect dart to second. Anderson looped one over the second baseman, advancing García to third. Abreu blooped a single into right, dropping the ball between three Twins fielders. García scored, and the White Sox appeared to be in business with two on and no outs for the second time in three innings. But McCann’s foul popup was caught at the right-field foul line and Skole struck out swinging. Jiménez earned an infield single as Polanco couldn’t get a handle on the ball: He nearly stepped on it before he finally corralled it. That loaded the bases, but Goins struck out on a splitter to squelch the rally.

Handed a 3-0 lead, Giolito collected two more strikeouts and a broken-bat groundout on an economical nine pitches in the bottom of the frame.

Sánchez grounded right to first to start the fourth: Sanó ambled over to the bag in plenty of time to beat Sánchez. Odorizzi plunked Engel on the upper arm, but that was his only baserunner of the inning. Polanco made an impressive leaping grab of García’s liner and Anderson grounded out.

After Polanco struck out swinging at a 96 MPH fastball in the bottom of the fourth, Cruz lined a base hit to left. Rosario grounded to second for a force out, but the White Sox didn’t get the double play because second baseman Yolmer Sanchez airmailed the ball toward the dugout. The ball bounced back onto the field so no advance for the runner; but no error either due to the “can’t assume a double play” rule. Sanó went down swinging for Giolito’s seventh strikeout.

In the fifth, Abreu broke the White Sox streak of seven singles with a double into the left-field corner. After McCann looked at strike three and Skole grounded out (advancing Abreu to third), Jiménez earned the first walk of the ballgame. With Goins at the plate, a wild pitch bounced into the dugout, scoring Abreu: 4-0, Sox. Goins struck out to end the frame with Odorizzi at 104 pitches.

Giolito continued his string of single-digit pitch numbers in the bottom of the fifth. Arraez and Schoop grounded out and Castro popped out for an eight-pitch inning.

Sánchez greeted new Twins pitcher Ryne Harper with a double off the wall in center to open the sixth, then took third on a wild pitch. Engel walked. With the infield in, García’s infield popup was caught easily. Anderson was called out on a not-quite-checked swing. Abreu grounded to Polanco, who made a great play to get the out at first to end the frame without a run scoring.

In the bottom of the sixth, Jake Cave flied out to Jiménez in left, who fought the sun to make the catch. Popouts by Kepler and Polanco gave Giolito another efficient one-two-three inning.

Sam Dyson took over the Twins pitching in the top of the seventh, also working a one-two-three inning.

Giolito had another three-up, three-down inning in the seventh with some help from his center fielder. Engel made a flying, diving catch of Cruz’s liner and rolled over holding the ball. He was rewarded with applause by Giolito. Ehire Adrianza stepped in, pinch-hitting for Rosario, who left with hamstring tightness. Adrianza was out quickly on an “excuse me” swing comebacker handled by Giolito. Sanó struck out, giving Giolito 11 retired in a row.

Tyler Duffey, the fourth Twins pitcher, collected two strikeouts and a groundout for a quick top of the eighth.

Giolito retired his 12th straight batter in the bottom of the eighth when Arraez flied out to left — although it was Engel who sprinted across from center to make the catch. Schoop got the first Twins hit since the fourth: a double down the third-base line for only the third hit allowed by Giolito. Castro and Cave both struck out, giving Giolito his 10th strikeout of the game on his 100th pitch. This was his third start in a row with double-digit strikeouts. The last time a White Sox pitcher achieved that was Chris Sale in 2015: Sale had a streak May 23 through June 30 of eight consecutive starts with double-digit strikeouts.

Trevor May pitched the top of the ninth for the Twins. All he allowed was a single to Anderson.

Giolito returned to pitch the bottom of the ninth. Kepler was his 11th strikeout victim. Polanco popped up on the infield. Cruz battled, fouling off pitches to work the count full, but struck out on Giolito’s 115th pitch, giving him an even dozen strikeouts on the day — and no walks. In his postgame interview, he gave credit to his catcher, James McCann, for his game-calling skills.

Giolito became the first White Sox pitcher with a line of nine innings, no runs, no walks, and at least 12 strikeouts since Gary Peters on July 15, 1963. Peters struck out 13 in a 4-0 win against the Orioles. With this second complete game, Giolito tied the Indians’ Shane Bieber for the most complete games this season.2 Giolito’s three-hitter was the first complete-game shutout against the Twins since Jake Arrieta’s on June 21, 2015, an 8-0 loss to the Cubs.3

Also remarkable was Giolito’s improvement over his 2018 performance, where he “led” the majors in walks and earned runs allowed. He credited a change in attitude and work in the weight room for his 2019 success.4