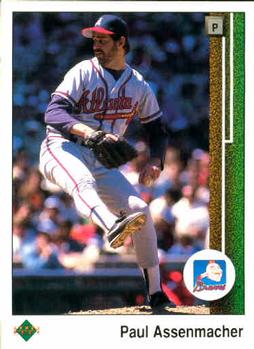 It wasn’t surprising that only 9,117 fans chose to attend this Tuesday late afternoon game. The Atlanta Braves were sitting at 50-74, sixth and last in the NL West Division. The visiting St. Louis Cardinals were 66-57, only good enough for fourth in the NL East but just four games back of the division-leading Cubs. Those fans who did stick it out, despite the dismal statistics, were rewarded by seeing a rare feat by one of their pitchers.

Derek Lilliquist (7-7, 4.03 ERA) took the mound for Atlanta. This was his first year in the majors; he had debuted less than two years after he was drafted by the Braves. He got the first two outs on four pitches. Pedro Guerrero then battled for 10 pitches, finally winning the battle with a double to center. Tom Brunansky doubled off the wall, scoring Guerrero. Lilliquist got a groundout on the next pitch to end the inning with the score 1-0, Cardinals.

Ted Power (4-5, 3.82 ERA) had little trouble with the Braves in the home half of the first. All he allowed was a walk to Lonnie Smith. He had mostly been a reliever through 1986, then was converted to a starter. He had been released by Detroit during spring training,1 but caught on with the Cardinals and became a solid part of their rotation starting in June.

José Oquendo greeted Lilliquist with a double to left to open the second. Milt Thompson followed with an infield single by beating Lilliquist to the bag. The third consecutive hit, a single by Tony Peña, scored Oquendo: 2-0, Cards. Thanks to some good fielding, Lilliquist managed to get out of the inning without allowing any more runs. Power bunted back to the pitcher, advancing the runners. Vince Coleman bounced to third, allowing the Braves to catch Thompson in a rundown between third and home for the second out. Ozzie Smith made a bid for a home run but it was caught 15 feet from the wall for the third out.

Power’s second inning of work mirrored his first: All he allowed was a walk, this time to Jeff Blauser.

Oquendo opened the fourth inning with a single, then advanced to second when shortstop Andres Thomas made a throw from his backside – which bounced off the dugout railing.2 That put Oquendo in position to score when Peña singled to center with one out. Power bunted Peña to second, but he was left there when Coleman grounded out. Power continued his dominance of the Braves in the home half of the fourth, again allowing only a walk.

Ozzie Smith walked to open the top of the fifth. Guerrero singled on the next pitch, advancing Smith to second. Lilliquist’s fourth pitch to Brunansky was wild, allowing Smith to dash to third. The next pitch was wild as well, not only allowing Brunansky to walk, but allowed Smith to score. That ended Lilliquist’s outing. His ERA increased only slightly to 4.12 as two of the five runs he allowed were unearned.

Lilliquist was relieved by Paul Assenmacher. This was Assenmacher’s last game for the Braves, the team that had signed him as an undrafted free agent back in 1983. He was traded to the Cubs two days later. At least his last appearance was one for the record books.3 He started by striking out Terry Pendleton on three pitches. Oquendo reached on a throwing error by the third baseman, loading the bases with only one out. Assenmacher got the second out by striking out Thompson. He struck out Peña for his third strikeout. It was on a wild pitch, so Peña reached first while Guerrero scored the Cardinals’ fifth run. That set up the opportunity for a little history: Assenmacher struck out Power for his fourth strikeout of the inning. He was the 20th pitcher in the 20th century to strike out four in one inning.4

Unlike the eventful top of the fifth, the home half was yet another 1-2-3 inning for Power. By now his teammates noticed that he had not allowed a hit, and stopped saying “Good inning” to him when he returned to the dugout.5

The wheels really came off for Atlanta when Mark Eichhorn took over the pitching in the top of the sixth. Coleman started with a bunt single, then took second on a balk. Eichhorn got two outs but then gave up a two-run homer to Brunansky. Before Eichhorn could get that elusive third out, he issued two walks and a single to load the bases. Peña doubled deep enough to score three more runs before being tagged out at second. 10-0, Cardinals.

Power got three quick outs on 10 pitches in the bottom of the sixth. By now, none of his teammates were speaking to him when he returned to the dugout.

Before the seventh inning could begin, the umpire had to shoo a live bat away from third base.6 As it flew off, it buzzed third-base coach Rich Hacker, who earlier had to dodge Coleman’s flying (wooden) bat, a more typical hazard for base coaches. Once it was underway, the seventh inning was as uneventful as the bottom of the sixth: three up, three down for both pitchers.

In the top of the eighth, the Cardinals did get a hit against Braves pitcher Sergio Valdéz, but it was erased on a double play.

Power managed to take his no-hit bid two batters into the eighth inning. He admitted later that he was tiring, and manager Whitey Herzog said that he would have pulled him earlier if he had allowed a hit.7 But after John Russell walked, Tommy Gregg ended the no-hit bid and the shutout with a two-run homer for the Braves. Oddibe McDowell reached on an error. After Jeff Treadway flied out, Lonnie Smith doubled. Dale Murphy hit Power’s 100th, and last, pitch into the stands for a three-run homer. Herzog finally made the switch to Frank DiPino. He ended the inning with a fly out of Darrell Evans and the score 10-5, Cardinals.

Despite giving up five runs in the inning, Power lowered his ERA to 3.67 since three of the five were unearned. He made only three more starts in 1989, finishing the rest of his career (through 1993) as a relief pitcher.

Joe Boever, the fifth Atlanta pitcher, started the top of the ninth by walking Oquendo (who had now reached base in all five of his plate appearances). Thompson singled, putting two on, then Peña bunted them over. But Boever got two strikeouts to end the inning with the score unchanged.

In the bottom of the ninth, Dan Quisenberry allowed a single that was immediately erased on a double play. He gave up another single and was replaced by Ken Dayley, who gave up yet another single. Dayley finally struck out McDowell for the final out.

This was the 75th loss for the Braves on the way to a 97-loss season, finishing 28 games back of the Giants. For their part, the Cardinals spent most of the rest of the year in second place behind the Cubs, dropping to third behind the Mets on the last day of the season.

In addition to the sources cited in the Notes, the author also consulted Baseball-Reference.com and Retrosheet.org: