August 22, 2000: In Rockies' exciting rally, the winning pitcher was the catcher

August 22, 2000: In Rockies' exciting rally, the winning pitcher was the catcher 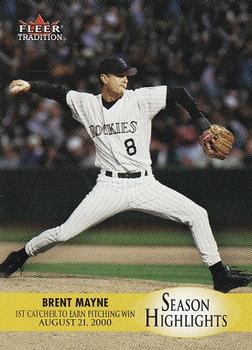 The game between the Atlanta Braves and Colorado Rockies was one of the most exciting games of the year at Coors Field. The Braves entered the game with a 76-48 record, 2½ games ahead of the second-place New York Mets in the National League East Division. The Rockies were 62-63, good enough for fourth place, 10 games behind the NL West-leading San Francisco Giants. The game also produced a rare feat that had not been accomplished in 30 years.

An announced crowd of 41,707 witnessed a pitching matchup of two struggling right-handers. John Burkett started for the Braves and entered the game with an 8-5 record and a 4.77 ERA. The Rockies countered with Masato Yoshii. A veteran of 13 seasons in Japan before coming to the United States in 1998, Yoshii was 5-13 with 5.94 ERA. The matchup, coupled with the high altitude of Coors Field, suggested that the bullpens might be busy that night. They were and when the dust settled, the two teams used 17 pitchers in a 12-inning affair that included an 11th-inning melee.

Yoshii, who delivered the first pitch at 7:05 P.M. under cloudy skies with a game time temperature of 78 degrees, started the game by walking Rafael Furcal. With one out, Furcal stole second and advanced to third when catcher Ben Petrick sailed his throw to second into center field. After retiring Chipper Jones on a comebacker and walking B.J. Surhoff, Yoshii escaped by getting Andres Galarraga to ground into an inning-ending fielder’s choice.

The Rockies opened the scoring with two runs in the bottom of the first. Juan Pierre led off with a single. With two outs the Rockies’ speedy center fielder stole second. After a walk to Jeffrey Hammonds, Todd Walker drilled a triple to deep right-center to score Pierre and Hammonds. Burkett struck out Jeff Cirillo to end the inning.

Yoshii escaped unscathed again after two Braves reached base in the top of the second. Burkett was not as lucky in the bottom of the inning. Todd Hollandsworth led off with a single and advanced to third on Petrick’s single to right. Hollandsworth scored when Pierre lifted a fly ball to right. The Rockies led, 3-0.

The Braves broke through in the top of the third when Andruw Jones singled to start the inning. Going on the first pitch, the center fielder swiped second. Two batters later, Jones scored when Surhoff sent a fly ball to deep left-center to cut the Rockies' lead to 3-1. Burkett retired the Rockies in order in the bottom of the inning.

After the Braves failed to score in the top of the fourth, the Rockies went back to work. Cirillo led off with a groundball double to short left field and moved to third when Hollandsworth followed with his second consecutive single. Petrick singled to drive in Cirillo and move Hollandsworth up 90 feet. Yoshii’s sacrifice bunt set the table for Pierre, who failed to drive in a run when he was caught looking at strike three. Just when it appeared that Burkett might wiggle off the hook, Neifi Perez delivered a two-out, two-run double to deep right-center to give the Rockies what appeared to be a comfortable 6-1 lead.

The Braves responded with three runs of their own in the top of the fifth. Andruw Jones hit a one-out solo home run to right-center, which was followed by a Chipper Jones single, an RBI double by Surhoff, and a run-scoring single to center by Galarraga. In a matter of minutes, the Braves had cut the Rockies’ lead to 6-4.

Burkett held the Rockies in check in the bottom of the fifth before the parade of pitchers began. Mike DeJean pitched a scoreless sixth for the Rockies and left-hander Terry Mulholland came on in relief of Burkett to get the final out of the sixth for the Braves.

The Braves tied the game in the top of the seventh. Chipper Jones hit a one-out home run to cut the lead to 6-5. Surhoff walked and moved into scoring position when he stole second. Galarraga’s single advanced Surhoff to third. Trying to preserve the once comfortable lead, Rockies manager Buddy Bell summoned Jose Jimenez from the bullpen. Javy Lopez greeted Jimenez with an RBI single to tie the score. From there it was a war of attrition.

With two outs in the top of the 11th inning, Bell called on his last available reliever, right-hander John Wasdin, to presumably pitch the rest of the way. On a 3-and-2 pitch, Wasdin hit Galarraga with an off-speed pitch that was up and in. Galarraga, who made no attempt to get out of the way of the pitch, began making his way toward first base before charging the mound and inciting a bench-clearing brawl (despite the hit batter being the first of the game … in extra innings … on a full count … with two outs).1

The Rockies called on the previous night’s starter, Brian Bohanon, to get them through the 10th inning. Left-hander Bohanon, who had thrown 99 pitches the night before, walked Brian Jordan before retiring Lopez on a fly ball to deep left. Despite throwing only 10 pitches, Bohanon had nothing more to give.

While Scott Kamieniecki was retiring the Rockies in the bottom of the 11th, Bell, managing from the clubhouse, had no idea which of his position players could pitch. Recalling the situation, Rockies catcher Brent Mayne speculated that perhaps Bell was thinking, "[C]atchers usually have strong arms, or whatever, hell, I don't know.” When Bell asked Mayne, who was nursing a sore left wrist, if he could pitch, Mayne slightly fibbed. “Yeah, I can pitch.”3 Mayne later admitted he had never pitched at any level.4

Entering the game in the top of the 12th inning with the score tied at 6-6, Mayne stood on the mound fulfilling a lifelong dream.5 First up was Tom Glavine, the Braves’ All-Star starting pitcher, who was called on to pinch-hit for Kamieniecki. After getting ahead with a 1-and-2 count, Mayne sailed an off-speed pitch five feet behind the left-handed-hitting Glavine. Two pitches later, Glavine hit a little nubber between the mound and first base, which Mayne fielded cleanly and tossed to first for the inning’s first out. Walt Weiss flied out to center for the second out. Things then turned a bit tense when Furcal singled and moved to second on a wild pitch. Mayne then walked Andruw Jones on five pitches to set the stage for Chipper Jones, who chopped a weak, checked-swing grounder to third to end the Braves half of the inning.

Controversial left-handed reliever John Rocker started the 12th inning for the Braves. Perez singled to center and raced to third when Todd Helton singled to right. When Hammonds lined out to center, Perez played it safe and stayed at third. Braves manager Bobby Cox called on right-hander Stan Belinda to extinguish the fire and keep the game tied. After striking out Terry Shumpert, Belinda intentionally walked Cirillo to pitch to Mayne. However, Mayne was lifted for pinch-hitter Adam Melhuse. On Belinda’s first pitch, Melhuse made catcher-turned-pitcher Mayne the winning pitcher with a line-drive single to left that scored Perez. Rocker was tagged with the loss.

Mayne’s victory marked the first time a position player picked up a win since Rocky Colavito relieved Steve Barber and pitched 2⅔ shutout innings in the first game of doubleheader against the Detroit Tigers at Yankee Stadium on August 25, 1968.6 As of 2018, Mayne was one of only eight position players who earned a win in their only pitching appearance.7

Since Mayne’s historic night, three other position players have recorded victories (as of 2018): Philadelphia’s Wilson Valdez (2011), Baltimore’s Chris Davis (2012), and the Chicago Cubs’ John Baker (2014), who beat the Rockies.8