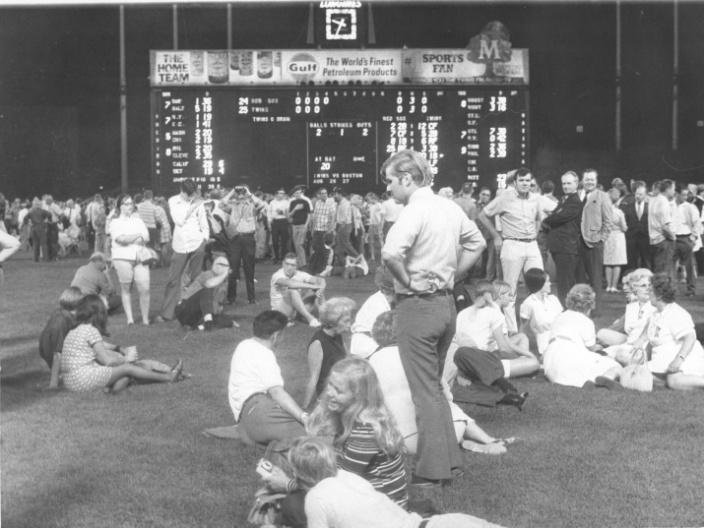 The 1970 Boston Red Sox had a trio of avid anglers—Reggie Smith, Carl Yastrzemski, and Gary Peters—who carried fishing tackle on road trips. An August swing through Minnesota gave the trio a chance to relax on a lake in Spicer, about 100 miles from Bloomington, Minnesota, where they would start a three-game series against the Twins the following night.1

It was an escape from baseball—the Red Sox were hopelessly out of the race for the American League East title—as well as from world events. That morning a bomb at the University of Wisconsin killed a graduate student, part of ongoing protests against the Vietnam War.

Minnesota had already experienced its own spate of bombings in the past week. One blast injured a woman at the Dayton’s department store in St. Paul, and the Old Federal Building in Minneapolis had a bomb go off at 3 in the morning. The latter caused no injuries, but it set off a flurry of bomb threats to police departments and businesses,2 and the events would intrude upon the Twins-Red Sox game on Tuesday, August 25.

The game started at 8:00 P.M., and starters Vicente Romo for Boston and Bill Zepp for Minnesota pitched scoreless ball into the bottom of the fourth.

With two outs, Tony Oliva on first base for Minnesota, and a 2-and-1 count on Rich Reese, first-base umpire Nestor Chylak ran in, waving his arms to stop play. The Longines clock atop the scoreboard showed the time as 9:15.

Fans wondered why Chylak called time and quickly found out as public-address announcer Bob Casey announced: “We have been informed an explosion will occur at 9:30. We ask you to please leave the stadium in an orderly fashion. There is plenty of time and no need to panic. If you will please leave the stadium, we will resume the game when possible.”3

Someone had called the Bloomington police at 8:30 and said a bomb would explode at 9:30. The call was traced to a phone booth on the first deck of Metropolitan Stadium. Police and Twins officials began searching the stadium and made the decision to stop the game at 9:15 and clear people out.

The crowd of slightly fewer than 18,000 began heading toward the parking lot. The players went onto the field, presumably a safe place from an explosion.

At least one player opted for the parking lot, Bill Zepp. Zepp, in an interview 40 years later with Twins historian John Swol, said he recalled seeing owner Calvin Griffith in the dugout. “This was unheard of,” Zepp said, adding that Griffith began talking to manager Bill Rigney. He soon understood the reason when the announcement were made. Rather than join the other players on the field, Zepp waited out the delay in his car. “I didn’t run but I walked briskly to get a dry shirt and go to the parking lot,” he said.4

For some reason, ushers opened a gate by the Twins’ first-base dugout and directed fans onto the field to join the players. The Twins later said that had been a mistake, but the result was that 1,000 or so fans, as well as vendors, got to mingle with the players during the delay.5

The atmosphere was so festive that many forgot the reason they were out there. One person shouted, “Hey, it’s 9:30,” causing people to look at the clock but not go into the fetal position many had learned in elementary-school air-raid drills during the height of the Cold War over the past decade.

Vendors hawked their wares the same as they did in the stands. One beer vendor set up shop on first base, quickly sold out, and lamented that he hadn’t had the chance to get a couple more cases before the delay.

At 9:45 the all-clear was given, and fans were allowed back in the stands. Many who had gone to the parking lot had already departed, but the game resumed a few minutes before 10:00.

The 30-minute delay didn’t affect Zepp, but Romo stiffened up a bit. He finished out the fourth inning with no damage. He was scheduled to lead off in the top of the fifth and came out to the on-deck circle. However, the trainer came out to talk to him, and manager Eddie Kasko decided to take him out. The fans, recognizing what had happened, gave Romo an ovation as he walked back to the dugout.

Zepp made it through seven innings before giving way to lefty Tom Hall, who retired the first two Red Sox in the eighth. Then the blast came—not an actual bomb but one off the bat of Tony Conigliaro that landed in the left-field bleachers to give Boston a 1-0 lead.

Ken Brett, who had relieved Romo, carried the shutout into the bottom of the ninth but gave way to right-hander Gary Wagner after a leadoff single by Tony Oliva. Harmon Killebrew hit a long drive to center. Reggie Smith caught it right in front of the 430-foot sign, a little to the left of straightaway center, and heaved a throw in. It was too late to get Oliva, who had tagged and advanced to second; it also caused Smith to come out of the game as he injured his arm making the throw.

Rich Reese walked to put runners on first and second, and pinch-hitter Jim Holt hit a hard grounder to second. Mike Andrews fumbled the ball, but recovered and threw to Rico Petrocelli to force Reese. With no chance to doubleup Holt at first, Petrocelli instead wheeled and fired to George Scott at third. Oliva had rounded the base and slipped; he was trapped and run down between third and home to end the game.

The loss was the third in a row for the Twins, continuing an August swoon that included a nine-game losing streak earlier in the month and was eroding their chances for a second straight division title. Minnesota’s closest challenger at the time, the California Angels, had won in extra innings in Detroit to pull within 3½ games of first place. However, the Twins recovered and won the division easily, by 9 games over Oakland.

The game also featured three of the league leaders in batting average—Oliva, Yastrzemski, and Smith (Luis Aparicio of Chicago was the other). Yaz and Smith were hitless, and Oliva’s two hits put him and Yastrzemski atop the leaders at .321.

However, Oliva’s gaffe to end the game loomed larger than his hits, and the bizarre event in the fourth inning dominated all the news coverage of the game.

Said Bill Rigney, “I’ve seen games rained out and postponed by power failures, but I’ve never been bombed out.”6

The next night a copycat tried for a similar disruption at Sec Taylor Stadium in Des Moines, Iowa, calling before an American Association game between Indianapolis and Iowa and reporting that a bomb would go off at 8:15. Iowa owner Ray Johnson said, “The bomb threat was from a young boy. He phoned to say the bomb had been placed during the afternoon. But we had lots of personnel here all day, and no strangers had entered the park.” Police and team personnel searched the stadium and decided not to evacuate the fans.7

Six years later—the Vietnam War over and a different mood prevailing in the country—another bomb threat was called in to Met Stadium. It happened during a game between the Angels and Twins on Saturday, September 26, 1976. This time the caller couldn’t even get the satisfaction of clearing the stands and delaying the game; fans were told of the bomb threat and given the option of staying or leaving as the game continued.8

The sources cited in the Notes are supplemented by memories of the author, who was on the field during the delay, and the author’s scorebook, which now contains autographs of Sonny Siebert, Mike Nagy, Carl Yastrzemski, Frank Quilici, and Rich Reese. The author also shook hands with Reggie Smith during the delay and was concerned that he squeezed too hard and later caused the injury that forced Smith out of the game. In addition to the sources cited in the Notes, the author also used the Baseball-Reference.com and Retrosheet.org websites.

1“Bosox Stars Take a Day Off” (Photo by Ron Schara), Minneapolis Tribune, August 26, 1970: 23; Ron Schara, “Walleyes Turn Backs on Yaz, Smith, Peters,”Minneapolis Tribune, August 26, 1970: 27. The photo and story appeared in the Wednesday, August 26 Tribune, the morning after the game with the bomb threat. However, it is likely the photo was taken on Monday, August 24. Green Lake in Spicer is more than 100 miles from the Twin Cities, and the players probably would not have gone that far with a game that night. Boston had played Sunday afternoon in Kansas City and probably flew directly to Minneapolis, leaving a day off Monday that would have allowed enough time for a fishing trip that far from the Twin Cities.

5 The number of fans who joined the players on the field was listed as anywhere from 1,000 to 4,000 depending on the news story.