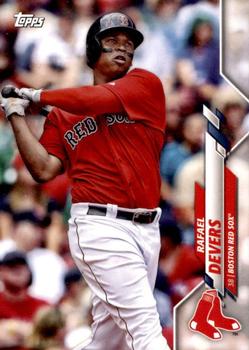 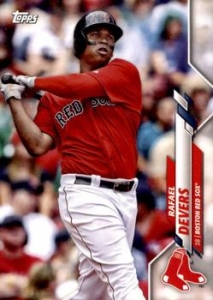 The last time the Boston Red Sox had played a game in Buffalo was on July 6, 1917 – and that was an exhibition game. In the first two decades of the twentieth century, the team played four exhibition games there, all against local minor-league teams:

The game the Red Sox played that night was a regulation major-league baseball game, played in Buffalo because Canadian government regulations to protect their country’s citizenry from the COVID-19 pandemic required the Toronto Blue Jays to play their “home” games somewhere that wouldn’t necessitate significant numbers of players and personnel crossing back and forth across Canada’s national borders. The Blue Jays ultimately selected Sahlen Field in Buffalo, home to their Triple-A affiliate Buffalo Bisons. Minor-league baseball had been canceled altogether, so the park was available. The Blue Jays spent a considerable amount to upgrade the facility so that players could remain reasonably socially-distanced from each other while preparing for the games.

Attendance at the game was, as throughout all of baseball, zero. Fans were not permitted to attend games during the 2020 regular season. As was the case at several ballparks, there were a few hundred placard images of fans placed in seats, which helped raise money for local charities; recorded crowd sounds were piped into the park.

Before the game, the Blue Jays were 14-13 for the season and in third place in the American League East. Boston was in last place, with a record of 9-20 (.310), just 18 percentage points ahead of the Pittsburgh Pirates for the worst record in baseball. Because of the pandemic, Opening Day had been pushed back to July 24. For Boston, this game was the halfway point of the scheduled 60-game season.

The visiting Red Sox batted first. Right-hander Chase Anderson was in his seventh major-league season, his first with the Jays. He set the Red Sox down in order without allowing the ball to be hit out of the infield – two groundouts with a strikeout between them.

Kyle Hart, a left-hander whose big-league debut had been just 12 days earlier, started for Boston. The Jays got to him for four runs in the bottom of the first. Two singles to left, a strikeout, and a walk, and Toronto had the bases loaded. Left fielder Lourdes Gurriel Jr. lined a double to deep right field and drove in two runs. After Hart got Travis Shaw to pop up to third base, catcher Danny Jansen singled to left and drove in two more. It was 4-0, Jays, after just one inning.1

Xander Bogaerts doubled to center field to lead off the second for the Red Sox, and Mitch Moreland singled to drive him in. The Red Sox were on the board, but it was the only run they scored that inning. They didn’t score at all in the third, nor did the Blue Jays.

The Red Sox pulled within a run by scoring twice in the top of the fourth. Bogaerts and Moreland opened the inning, reversing their accomplishments of the second inning: it was Bogaerts who singled and Moreland who doubled. That brought in the first run of the inning.

After two groundouts, Moreland took third base on a passed ball. He scored on an infield single by Jackie Bradley Jr., who ran hard to first base and beat the throw. First-base umpire Tripp Gibson originally called Bradley out, but Red Sox manager Ron Roenicke challenged the call. It was overturned on video review, and the run counted. The score was now 4-3.

Hart struck out the first batter he faced in the bottom of the fourth, but Santiago Espinal bunted along the third-base line against an infield shift for an easy base hit and Cavan Biggio walked. Roenicke summoned Phillips Valdez in relief. A groundout to short produced the second out, but both baserunners advanced. Vladimir Guerrero Jr.’s hard-hit single to left field scored both runners and the Jays had their three-run lead restored, 6-3. All six runs were charged to Hart.

Red Sox right fielder Alex Verdugo singled to lead off the fifth, but no other Boston batter reached base. Valdez walked Gurriel Jr. in the bottom of the fifth; he was the only Jays runner.

In the top of the sixth, the Boston bats got to work again. First, Anderson walked Mitch Moreland. Toronto manager Charlie Montoyo brought in reliever Wilmer Font. On the seventh pitch of his at-bat, catcher Christian Vazquez doubled, putting runners on second and third. Kevin Pillar popped up to first base, but Bradley Jr. singled, making it 6-4. On an 0-and-2 count, Font hit second baseman Jose Peraza, loading the bases. Verdugo singled to right field, making it 6-5 as everyone moved up one base.

Then came the big blow. A.J. Cole had come on to relieve Font. On a 3-and-2 count, Rafael Devers skipped a triple into the right-field corner, clearing the bases. Now it was 8-6, Red Sox. DH J.D. Martinez launched a fly ball to right field; Devers tagged, scored on the sacrifice, and it was 9-6, Boston.

Darwinzon Hernandez relieved Valdez for the bottom of the sixth. It was only his second appearance after he returned to the team following a bout with COVID-19. He’d won his first game in two innings of relief, and he pitched the sixth and seventh innings in this one, allowing a single in each inning and walking one, but holding Toronto scoreless.

Each team used an additional pair of relievers, but there was only one more run scored. Teoscar Hernandez hit a solo home run off Boston’s Matt Barnes with one out in the bottom of the ninth. The final score: Boston 9, Toronto 7.

Phillips Valdez, in the right place at the right time as the pitcher of record when the Red Sox erupted for their six-run sixth inning, earned his first major-league win. Font, who had secured only one out while allowing four earned runs, took the loss.

“Nothing about this season has been simple,” wrote MLB.com’s Blue Jays correspondent Keegan Matheson.2

Hart, Boston’s starter, was humble after the game. “I’ve learned that I’m not as good as I thought I was, quite frankly. I had a lot of confidence coming in here and I learned that these guys are really good. I hope I can look back in six or seven years and say, ‘Hey, guys, you should have seen how my big-league career started. But, yeah, I’m fighting for my life. I’m not going to sugarcoat it. … You can’t go out and give the other team two, three, four runs in the first inning.”3

But Ron Roenicke was upbeat: “We are playing better ball. … The hitting is certainly better. Even though we started as bad as we did tonight, we did not let it get out of hand. It gave us the bullpen pieces to do well and give the offense a chance.”4

The following evening, August 26, the Blue Jays won with ease, 9-1. The third game of the planned three-game set was postponed because both teams decided not to play in protest of the police shooting of a Black man, Jacob Blake, in Kenosha, Wisconsin. Blake was shot in the back seven times. Several teams in professional baseball, basketball, hockey, and soccer decided not to play because of the shooting. After the shortened series in Buffalo, the Red Sox returned to Fenway Park for an August 28 game against the Washington Nationals on a day celebrated across baseball as Jackie Robinson Day.

At season’s end, the Red Sox were last in the American League East, at 24-36, a .400 winning percentage. They were 16 games behind first-place Tampa Bay. The Blue Jays finished third at 32-28, eight games back. They qualified for postseason play under new rules that allowed more teams into the postseason; their time in the 2020 playoffs was brief as the Rays swept them in a best-of-three wild-card series. The Rays made it all the way to the World Series, losing in six games to the Los Angeles Dodgers.

1 The game was Hart’s third major-league start and sportswriter Sean McAdam noted that each time he’d been hit for multiple runs in the first inning – two runs in each of his first two starts and four in this one. Sean McAdam, “Sox Dig Out, Storm Back,” Boston Sports Journal, August 25, 2020. https://www.bostonsportsjournal.com/2020/08/25/bsj-game-report-red-sox-9-blue-jays-7-sox-dig-storm-back/

3 Peter Abraham, “Suitors Impressed in Red Sox Victory,” Boston Globe, August 26, 2020: C5. Hart pitched only one more time over the second half of the season, allowing six runs on seven hits in two innings of mop-up relief against the Atlanta Braves on September 1.