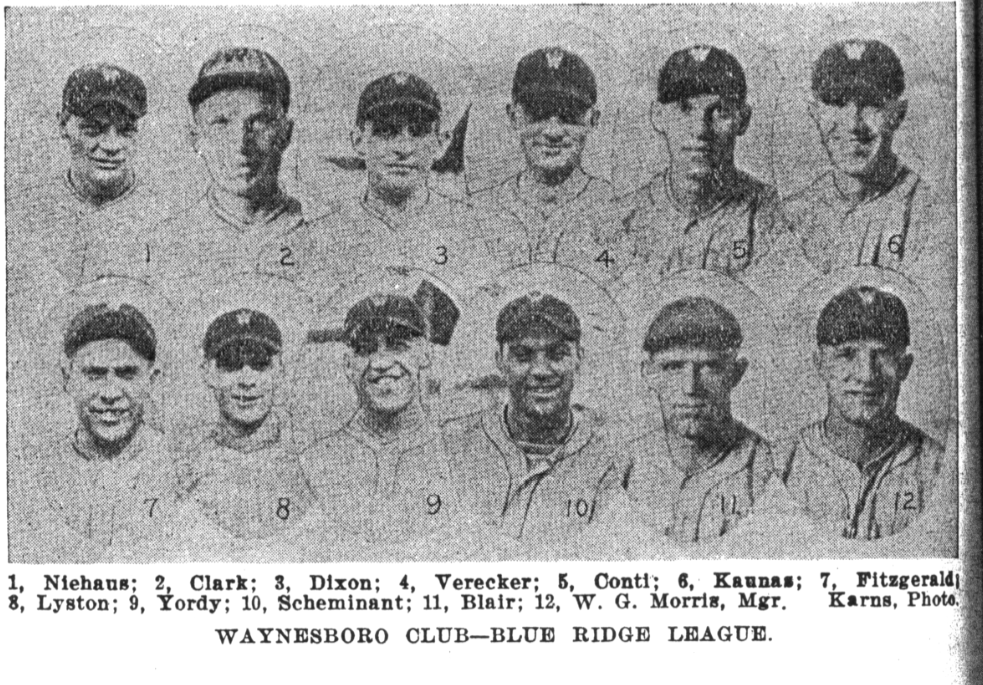 In 1922 the Class D Blue Ridge League consisted of teams from Hagerstown and Frederick, Maryland; Waynesboro, Hanover, and Chambersburg, Pennsylvania; and Martinsburg, WestVirginia. The loop had a $2,000 monthly salary cap for the 13-man roster, including the manager, who was normally an active player. The circuit operated under the Class Rule, which allowed clubs to have only three men, including the manager, who had played 35 games or more at a higher level than Class D.

Late in the summer of 1922 the league was in the midst of a tight pennant race. On August 25 the second place Waynesboro Villagers [52-38] traveled to West Virginia to play a two-game series against the league-leading Martinsburg Blue Sox [54-37] at Rosemont Park. The talented Blue Sox team was tough to beat at home, having lost just five games at their grounds so far in the season. One of the keys to the team’s success was the short porch in right field at Rosemont Park that Blue Sox batters used to their advantage. Another factor was the rowdy tactics of the Martinsburg fans. Their reputation for violent behavior toward umpires and opposing players was well known.

A few days before the game, players from the Chambersburg Maroons warned the Waynesboro club about the trouble they had had with the Blue Sox crowd the previous Saturday. The Maroons felt the abusive conduct of Martinsburg’s fans intimidated the umpires to the point where they couldn’t call a fair game. The Chambersburg players even took their own water to the games in Martinsburg over fears that someone might try to tamper with their cooler.

The Waynesboro-Martinsburg game was barely under way when the Blue Sox faithful initiated the first act of aggression. Early on, a man in the stands threw a bottle at Waynesboro third baseman Joe Conti while Martinsburg was at bat. Conti, one of the best hitters in the league, had just returned to the Villagers’ lineup after a stint in the hospital with a leg injury. The projectile was thrown so hard that it whizzed by Conti’s head and landed in the outfield grass just past the second-base bag. When the bottle was removed from the field, the Martinsburg player who was coaching third base turned to the crowd and said,“When you throw at ’em, don’t miss ’em.”1 As Conti walked off the field at the end of the inning he asked Blue Sox manager Burt Shipley to control the crowd. Shipley replied, “I don’t care if they hit you or not.”2

The Martinsburg fans were so worked up that every time a close play went against the team, they charged the field to attack the Waynesboro players. This happened nearly every inning with local law enforcement and a handful of the Martinsburg players restoring order each time. Even with these transgressions, the umpires allowed the game to continue. Of the incidents, the Waynesboro Press wrote, “Several times the fans surged down onto the field and assaulted players on the Waynesboro team. Morris was hit by a potato. Clarke and Fitzgerald were hit by stones or pieces of brick and Lyston was struck in the face. It appeared that for a while there would be some player murdered but several of the Martinsburg team and the police drove the mob back.”3

Martinsburg players Lewis “Hack” Wilson, Mick Mullaney, and Reggie Rawlings were in the forefront of holding back the crazed fans. But Shipley, two of the team’s directors and a number of Martinsburg players did everything they could to stir up the crowd. Before the game an official of the Martinsburg team unsuccessfully tried to entice a Waynesboro official to bet on the game. During the game the executive milled about the stands inciting the fans at every turn.

Many of the Waynesboro supporters were assaulted by bands of ruffians. One Villagers fan, a woman, was called a number of disrespectful names before being struck in the face. The Waynesboro Press observed, “The manager and other members of the team and one or two directors did what they could to increase the disorder and further incited to riot hundreds of fans who had reached such a frenzy that they were no longer responsible for what they did.”4

With two outs in the bottom of the seventh and the score tied, 6-6, Martinsburg’s Rawlings smacked a double. Wilson followed with a base hit to right. With Rawlings rounding third, right fielder Hank Yordy fired a bullet to the plate. Rawlings was out by a sizable margin but umpire Jim O’Neill, fearing the wrath of the crowd, called Rawlings safe. Catcher Joe Fitzgerald stood there in disbelief as Waynesboro manager Country Morris came out to argue the call.

A few innings earlier, Blue Sox manager Shipley had asked umpire O’Neill what would happen if two players got in a fight during the game. O’Neill said they would be ejected and fined. So Shipley charged out of the Martinsburg dugout after the play at the plate in the seventh and made a beeline for Fitzgerald. Shouting personal insults, Shipley hoped to initiate a fight so the Villagers would lose the services of their first-string catcher. But Morris got between the two men before any blows were exchanged.

Ironically, Morris and Shipley had been best friends and baseball teammates at Maryland Agricultural College. The two even played on the same teams during the early days of the Blue Ridge League. On this particular afternoon, past friendships didn’t matter to Shipley as long as his team came out on the winning end. Eventually the situation calmed down and the game resumed. The Martinsburg fans’ riotous behavior stopped at this point as the Blue Sox held on to win 7-6.

Fearing more violence, a handful of Waynesboro civic leaders lobbied against playing the second game of the series in Martinsburg. The players and a number of fans refused to be intimidated so the game went on as scheduled. In hope of deterring more trouble, Waynesboro officials asked league President J.V. Jamison to attend the game, which he agreed to do.

A large contingent from Waynesboro drove the 40 miles to Martinsburg to support their team. Villagers manager Morris chose Tommy Vereker as his starting pitcher while Shipley gave the ball to Ross Roberts. Vereker had broken into pro ball with the Federal League Baltimore Terrapins in 1915. Roberts was the ace of the Martinsburg staff.

Neither club scored in the first two innings. In the top of the third, Waynesboro got on the board via a two-run homer by Tommy Thomson. With both Vereker and Roberts pitching lights-out ball it took until the top of the seventh for Waynesboro to mount another rally. With two down and a man on base, Shipley ordered Roberts to walk Thomson. Shipley’s strategy backfired as the next batter, Luke Kaunas, hit one off the top of the fence. The blow plated both runners but Kaunas was thrown out on the bases to end the inning.

Martinsburg pushed a run across in the eighth on an RBI single by Joe Brophy. The Villagers didn’t score against Kirk Heatwole, who had relieved Roberts, in their next at-bat so Vereker took a 4-1 lead into the bottom of the ninth.

With one out, Rawlings singled. Wilson followed with another base hit. The throw from the outfield got by the cutoff man and rolled toward home plate. Fitzgerald pounced on the ball and threw behind the runner at first base. Wilson was tagged out on a close play, infuriating the hometown crowd. The locals in attendance had been on their best behavior up to this point due to President Jamison’s presence in the stands. Sensing they were about to lose the game the fans became enraged over the call at first and charged onto the field. West Virginia State Police along with local law enforcement were able to drive the crowd back into the stands. The next batter, Walter Hughes, smacked a single that scored Rawlings. Mullaney’s groundout sealed the Villagers’ 4-2 victory.

When umpire O’Neill signaled Mullaney out at first, the angry crowd stormed onto the diamond and attacked him. President Jamison came onto the field to help home-plate umpire Bill Byers elude the mob, but both men were unable to reach umpire O’Neill. Before police Captain C.H. Bowers and other officers could pull O’Neill from his angry attackers, the unfortunate arbitrator was pummeled with a variety of objects.

The Waynesboro players ran a gauntlet of fists, bricks, stones, and other projectiles as they made their way out of the ballpark. Their fans had to do the same. Many of the vehicles with Pennsylvania plates were vandalized. A few had their tires slashed, and a taxi was stolen outright. As the Waynesboro motorcade made its way out of Martinsburg, they were showered with more debris thrown by locals who had gathered along their escape route.

Winning pitcher Tommy Vereker fanned five batters while scattering eight hits. Thomson, Scheminant, Kaunas, Yordy, and Lyston each connected for one hit for the victorious Villagers. Brophy and Hack Wilson were the only Blue Sox with two hits. Martinsburg [57-43] ended up finishing first while Waynesboro [56-42] finished in second place. Martinsburg went on to sweep the Eastern Shore League champion Parksley team in the Five State Series that was sponsored by the Baltimore Sun at the end of the year.

The author’s grandfather Jimmy Lyston was Waynesboro’s second baseman in these games.

The author relied on the Waynesboro Press as the main source for this article. The Martinsburg Journal and the Gettysburg Times had more subdued versions of the events. These acts of fan aggression, to whatever degree they occurred, were not exclusive to the Blue Ridge League. Throughout the long history of minor-league baseball there are numerous well-documented acts of crowd violence. The author’s accounts of these events do not reflect upon the opinions of Blue Ridge League researchers Bob Savitt and John Coulson in regard to what happened during these games.

Cassidy Lent at the Baseball Hall of Fame for her time and efforts, along with her outstanding research, in tracking down the first name of Martinsburg first baseman Walter Hughes.

Bob Savitt for generously providing me with articles from the Martinsburg Journal on this game. In addition Bob was kind enough to send me an article on Martinsburg first baseman Hughes detailing the circumstances in which he joined the team.

John Coulson for his generosity in providing me with information on the Blue Ridge League salary cap and Class Rule.

Keenan, Jimmy. The Lystons: A Story of One Baltimore Family and Our National Pastime (self-published, 2009).