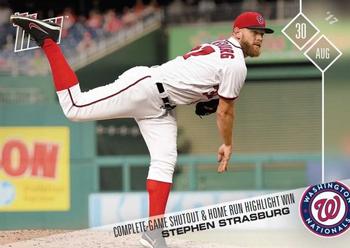 The Washington Nationals came into their game on August 30, 2017, looking for a sweep, having trounced the Miami Marlins, 11-2 and 8-3, the previous two nights. At 80-51, the division-leading Nationals were 14 games ahead of Miami (66-65), their nearest rival in the National League East Division. Instead of the usual sun for a 4:05 P.M. start on a sunny day, the shadows from the light standards and stands crept across the infield during the early innings, a factor that usually favored the pitchers.

Stephen Strasburg (10-4, 3.10 ERA) took the mound for the Nationals. He gave up a bunt single to Dee Gordon, who just beat the throw to first. Gordon tried to steal, but Giancarlo Stanton hit a foul popup that was caught in the first-base coaches box. Gordon tried again, but was caught out at second: He slid over the bag and Trea Turner kept the tag on, so he was out (without resorting to video review). That was the sixth caught stealing by José Lobaton, the Nationals backup catcher. Christian Yelich then hit one right to Ryan Zimmerman at first for the third out. Adam Conley (6-5, 5.17 ERA) took the mound for the Marlins. The left-hander had faced the Nationals five times in two years, struggling to an 8.22 ERA against them. He got Turner to pop out, but Wilmer Difo singled to extend his hitting streak to eight games. Difo advanced to second when Anthony Rendon grounded a single into center, then tagged up and ran for third on a Zimmerman fly out to the back of the left-field warning track. But he was left at third when Howie Kendrick struck out.

In the second, Marcell Ozuna bounced one just over the second-base bag, but Difo was able to corral it and throw to first in time for the out. Then J.T. Realmuto’s hit took a crazy bounce off the angle in the right-field wall, sending Jayson Werth chasing it in the outfield. Werth had played right field for the Nationals for several years, but had been moved to left starting in 2015 as he aged. But he was back in right because Bryce Harper was on the DL. Miami’s third-base coach, Fredi González, signaled to Realmuto to stop at second, although he had good speed for a catcher (he was playing first base in this game).1 That was as far as he went: A quick fly out and popout stranded him there. In the bottom of the second, Werth popped straight up in front of the plate. Michael A. Taylor singled into left but was erased when Lobaton (batting right-handed against the left-handed Conley) grounded into a 6-4-3 double play to end the inning.

In the top of the third, Strasburg worked a 1-2-3 inning including a strikeout looking of Conley. In the bottom, Conley responded with his own 1-2-3 inning, including a fly out for Strasburg.

Strasburg was efficient in the fourth: He needed only nine pitches to induce an infield out and two strikeouts (both swinging at changeups in the dirt). In the bottom of the frame, the Nationals got something going. After a Rendon groundout, Conley walked Zimmerman. Kendrick then dunked a hit into right field. Both runners advanced on a Werth broken bat comebacker, while the bat ended up in the new netting over the dugout. Miami chose to intentionally walk Taylor to load the bases. The strategy paid off: First, Lobaton was not ready to bat (maybe he’d forgotten about the no-pitch intentional walk), and when he did get to the plate, he was out on a foul pop right behind home plate.

Realmuto opened the fifth inning by tripling just inside the left-field line under a diving Rendon and a leaping umpire. Kendrick threw the ball in to Turner, who might have had a play at third, but Turner lost his grip on the ball. After Strasburg struck out Derek Dietrich and A.J. Ellis swinging, Washington intentionally walked Miguel Rojas to pitch to Conley. He flied out to left, wasting Realmuto’s leadoff triple. Since his teammates hadn’t provided any run support, Strasburg took matters into his own hands in the bottom of the fifth: He hit Conley’s first pitch 409 feet into the right-field stands to the cheers of the fans and the dugout. The homer was his second of the year, third of his career. After Turner was out on a comebacker, Difo hit his fifth home run into the center-field loft section, bringing the score to 2-0, Washington. Conley got Rendon and Kendrick out, sandwiched around a Zimmerman single, so allowed no further scoring.

In the top of the sixth, Strasburg faced the top of the Marlins’ order: Gordon, Stanton, and Yelich. He induced three groundouts on eight pitches. In the bottom of the inning, Conley also worked a 1-2-3 inning, but it took him 20 pitches. That brought his day to a close at 111 pitches.

In the seventh, after Ozuna grounded out on the first pitch, Realmuto singled under a diving Turner. Realmuto was out at second when Dietrich grounded into a fielder’s choice. Ellis swung and broke his bat, most of which landed on the mound, but Difo was able to corral the ball and step on second for the force play to end the inning. In the bottom half, Miami brought in Drew Steckenrider (2.49 ERA) to face Strasburg, who singled into center for his second hit of the day. Turner walked, but then Difo lined out to Rojas, who threw to second to double off Strasburg. Turner stole second without a throw when Ellis dropped the ball. Rendon doubled to right, scoring Turner, giving Rendon a new career RBI record of 86. Zimmerman grounded out to end the inning.

In the top of the eighth, Strasburg collected two more swinging strikeouts (Rojas and Ichiro Suzuki, who pinch-hit for Steckenrider). Gordon singled under a diving Turner, but Stanton flied out to end the half-inning. On the way off the mound, Strasburg had a word or two with home-plate umpire Sam Holbrook, probably about the third pitch of the Stanton at-bat, but the discussion didn’t escalate. In the bottom of the frame, Dustin McGowan took the mound for Miami. After Kendrick rolled one to Gordon for a groundout, Werth doubled off the center-field wall, missing a homer by less than a foot. Nationals manager Dusty Baker put in Alejandro de Aza to run for Werth. With Taylor batting, McGowan threw a wild pitch so de Aza advanced to third. Taylor struck out, then Miami deliberately walked Lobaton. The crowd came to its feet as Strasburg came out to the on-deck circle, and then to the plate, backed by the rhythm of his walk-up music, “Seven Nation Army” by the White Stripes. McGowan’s first pitch to Strasburg was a passed ball, so de Aza scored, bringing the score to the final 4-0, Washington. Strasburg grounded out to end the inning.

In the top of the ninth, De Aza stayed in to play right in place of Werth. Strasburg came to the mound having thrown only 87 pitches: a second complete game for him seemed within reach.2 In case he ran into trouble, though, Baker had Brandon Kintzler warming up in the bullpen. Yelich worked the count full, fouled off a couple, and finally got a single on the seventh pitch of the at-bat. It took another six pitches, but Strasburg got Ozuna to swing and miss for his eighth strikeout. Now the complete game really looked within reach: The crowd started cheering each strike. Again, six pitches; again, a full count:  Realmuto grounded to the shortstop Turner. The throw to Zimmerman at first forced him to stretch, but he held the bag: no replay challenge from Miami manager Don Mattingly. With the crowd standing and cheering, Dietrich grounded out, second to first, to end the game.

When asked about his homer in his postgame interview, Strasburg said his plan was “Swing hard in case you hit it.”3

Thanks to a successful bid on an MLB charity auction, the author was able to watch this game from the Nationals press box, complete with free food and beverages. Thanks to Strasburg’s efficient pitching, the game was only 2:36, so I had less than the typical three-plus hours to enjoy the view and benefits. The baseball below, in the author’s collection, is from J.T. Realmuto’s at-bat in the ninth inning. 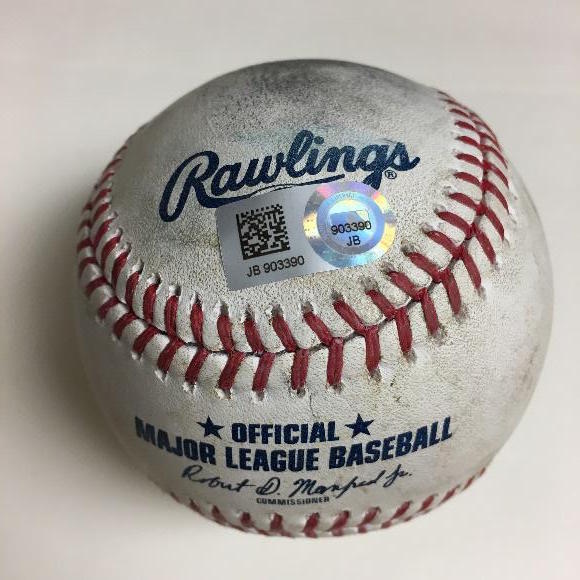