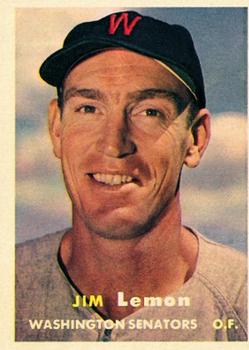 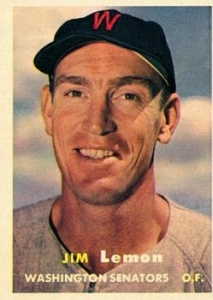 For most of its 51-year history (1911-1961), Washington’s Griffith Stadium was considered one of the toughest parks in the major leagues to hit a home run in – if not the toughest. To cite one example: In 1924, the year the hometown Senators won their only World Series championship during the club’s 60 years in Washington, only eight home runs were hit at Griffith Stadium during the regular season – just one by a Senators player. Entering the 1956 season, the Senators’ single-season individual home-run record was a measly 25, by Roy Sievers in 1955 – and Sievers had hit only seven of those 25 home runs at home. Over that 45-year period, only one player had ever had at three-homer game at Griffith: Joe DiMaggio of the visiting New York Yankees, who belted three four-baggers against the Senators on September 10, 1950.

But in October of 1955, Clark Griffith, the Senators’ longtime owner, died, and Griffith’s nephew Calvin took control of the franchise. “After taking over the team upon the death of his uncle,” wrote Gregory H. Wolf, “the cash-strapped owner wanted to sell more tickets by generating more offense. Consequently, the left-field foul pole was reduced from 388 feet to 350 feet…”1 Said Griffith: “We don’t have to apologize for the fact that our distance to left field is only 350 feet. It is still the longest left field in the American League with the exception of Chicago, which is only two feet longer.”2 Righty slugger Sievers, who had hit 24 homers for the Senators in 1954 prior to his (then) record 25 in 1955, was expected to be the main beneficiary of the cozier Griffith Stadium dimensions. But in 1956 Sievers was joined by a powerful right-handed hitter who had spent most of the ’55 season in the minor leagues: 6-foot-4 outfielder Jim Lemon.

A Covington, Virginia, native who had begun his professional baseball career as a member of the Cleveland Indians organization in 1947, Lemon had made his major-league debut with the Indians in 1950 but batted just .176 (6-for-34). After spending 1951-52 in the military, Lemon struggled once more in brief action with the Indians in 1953, hitting .174 (8-for-46). He was sold to the Senators in 1954, but entering the 1956 season, had played only 47 games in a Washington uniform, with just three home runs. Lemon made the Senators’ Opening Day roster and got off to a hot start, hitting .351 in April. He struck out frequently – his 138 strikeouts in 1956 set a major-league record for the time – but he was also finding the fences. Entering the games of August 31, Lemon’s 23 home runs were only three behind Sievers for the team lead, and were tied for fifth-most in the American League.

That night the Senators hosted the New York Yankees, but neither Sievers nor Lemon was the main attraction. The Yankees’ Mickey Mantle was mounting a serious challenge to Babe Ruth’s single-season home-run record of 60; with 46 homers so far, Mantle was slightly ahead of Ruth’s home-run pace in 1927. Mantle and the Yankees drew a crowd of 15,525 to Griffith Stadium for the game, in a year in which the Senators drew a major-league low 431,647 to their home games. It would be Washington’s fourth biggest home crowd of the season (the Senators’ top six home crowds in 1956 would all be for games against the Yankees).

One of the August 31 attendees was President Dwight D. Eisenhower. A ballplayer during his youth at Abilene (Kansas) High School and West Point, Eisenhower would throw out the first pitch at the Senators’ home opener during all but one of the eight years during his presidency. However, the August 31 game was one of the few games attended by the president during his terms of office that was not a special occasion like a World Series game or a Senators’ home opener. He made no secret of the fact that he was there to see Mantle. Eisenhower shook hands and posed for pictures with the Yankees slugger before the game. “I hope you hit a home run,” he told Mantle. “But I also hope Washington wins.”3

The game featured a pitching matchup between Yankees left-hander Whitey Ford, a future Hall of Famer having one of the best seasons of his career (19-6 with a league-leading 2.47 ERA) and the Senators Camilo Pascual, a 22-year-old righty who struggled in 1956 (6-18, 5.87) but would go on to win 174 major-league games. The Yankees got to Pascual for five hits (all singles) and three runs in the top of the second, but in the bottom half Lemon homered off Ford into the center-field bleachers. The Yankees got the run back in the third when Mantle walked and Bill Skowron drove him home with a double, but in the fourth Lemon struck again, homering into the new seats in the shortened left field to score behind Roy Sievers, who had walked. Then in the sixth, Lemon became the first Senators player to homer three times in a Washington home game (Goose Goslin had hit three homers in a game at Cleveland’s League Park, then known as Dunn Field, in 1925) with another blast off Ford, this one into the Yankees’ bullpen in left.

Lemon’s third homer tied the game, 4-4, but in the Yankees’ next at-bat, Mantle broke the tie – and fulfilled one of Eisenhower’s wishes – with “a shot over the high right field wall.”4 It was Mantle’s fifth home run off Pascual during the 1956 season; over his career, Mantle would hit 11 homers off Pascual, his third-most off any pitcher behind Early Wynn (13) and Pedro Ramos (12).

The Yankees made it 6-4 with another run in the top of the eighth. Then, in the bottom of the frame, Lemon came to the plate with a chance to become the third player in American League history to hit four homers in a game; Lou Gehrig in 1932 and Pat Seerey (in an 11-inning game) in 1948 were the first two. Lemon had a chance to tie the game with another homer, as Pete Runnels was on first base after singling. However, Yankees manager Casey Stengel took no chances with having Ford face Lemon for a fourth time; he brought in right-hander Tom Morgan to pitch to the Senators’ slugger. That may have been a wise move, as Lemon would homer seven times off Ford over the course of his career – the most by Lemon off any major-league pitcher, and the most allowed by Ford to any hitter. To the disappointment of Eisenhower and the Griffith Stadium crowd, Lemon went down on strikes against the Yankees righty. Morgan allowed a single to Karl Olson, the next hitter, but set down the final four Senators hitters to save Ford’s 15th victory of the year.

“I hit four in the All-Star Game in the Southern Association in 1955,” Lemon remarked later, “but no one ever asks me about that. If they did I wouldn’t even be able to tell who I hit them off, though I do remember that it involved four different pitchers and that two were right-handers. But those homers I hit off Ford: I must have answered the question ‘What kind of pitches did you hit?’ a thousand times. The first was a slow curve, the second a fast curve, the third was a fastball.”5 He would also tell a reporter that “At least a dozen guys have claimed they caught two of the homers.”6

After the game Eisenhower called Lemon to his box to shake hands. “It was a beaming President Eisenhower who seemed to enjoy every minute of tonight’s encounter,” wrote John Drebinger. “He rose and led the applause after each of the four homers.”7

Despite the loss, it was a night that Jim Lemon and Senators fans would never forget. Lemon went on to hit 144 homers in a Washington Senators uniform, second-most for a player during the team’s 60 years in the nation’s capital behind Roy Sievers’ 180.