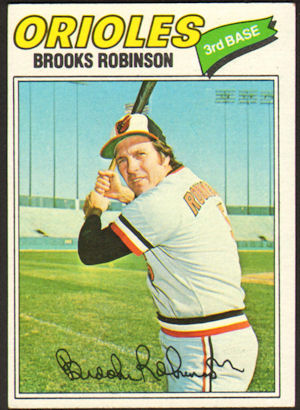 Oriole fans were positively giddy during the first week of August in 1983. A then-record crowd of 12,000 people journeyed to Cooperstown to see Brooks Robinson inducted into the Hall of Fame on July 31 and now, on the evening of Friday, August 5, some 39,544 had come to Baltimore’s Memorial Stadium for “Brooks Robinson Hall of Fame Celebration Night.” Not only was their hero in the Hall of Fame, but the current bunch of Birds were in first place in the American League East and taking on the AL West-leading Chicago White Sox. As game time drew near, however, it started to rain; not so hard as to make many run for cover but hard enough to wash the mustard off a foot-long hot dog before you could finish it.

Oriole fans were not going to leave, however, not with one more chance to cheer Brooks. Finally, after about 90 minutes, the rain stopped and the festivities got under way. The Human Vacuum Cleaner was chauffeured around the warning track in a 1955 Thunderbird, commemorating Brooks’ first season in Baltimore. In his speech to the soggy thousands, Brooks stated that he had taken “a lot of ribbing from some of the players because they said this is my third or fourth retirement party. But I assure you, this will be the last one.”1 For that statement, he was good-naturedly booed, but No. 5 brought tears to the eyes of more than a few when he concluded by saying, “I only wish I had 20 more years to give you.”2

It was not until approximately 10:00 p.m. that the game actually began. The White Sox jumped on starter Mike Boddicker for two runs in the first when with two down, Harold Baines’ homer was followed by a Greg Luzinski single and a Greg Walker triple. The Orioles put two on with none out in their half of the first against starter Randy Martz, but were unable to score. Indeed, the Orioles stranded runners in each of the first four innings. Meanwhile, Boddicker settled down and retired 10 in a row from the second through the fifth, then yielded another run in the sixth. The Orioles answered with two runs in their half of the sixth on singles by Rick Dempsey and Jim Dwyer. Boddicker, in his rookie season, retired the Sox in order in both the seventh and eighth innings, then yielded a lead-off homer to Luzinski in the ninth.

Down 4-2, Al Bumbry started the Baltimore ninth with a single off Salome Barojas, who had relieved Martz during the Oriole uprising in the sixth. Sox manager Tony La Russa replaced Barojas with Dennis Lamp, who promptly induced a double-play grounder off the bat of Dan Ford. It was now past 1:00 a.m. and hopes for an Oriole victory on Brooks Robinson’s Hall of Fame Celebration Night were as wet as the outfield grass. Still, the crowd had hung in there this long and when Cal Ripken and Eddie Murray singled, a noticeable stir moved through the damp air. John Lowenstein then singled home Ripken and when Ken Singleton singled home Murray, Memorial Stadium rocked. Dick Tidrow relieved Lamp and took the sign as Rich Dauer stood in. Dauer, who would finish the season with a .235 batting average, fought off a pitch and floated the ball into right field for the game-winning single. Five straight singles—the Orioles’ 14 hits on the night were all singles—with two out had produced a 5-4 Baltimore victory.

Cheering wildly, the fans refused to leave until after Dauer had taken a bare-chested curtain call, giving it his best Tarzan pose.

“It was a fastball inside,” he recounted after the game, “and you probably noticed that I didn’t exactly get around on it. I wasn’t trying to pull it. I was trying to go up the middle, I guess. It fell in, and that’s all that counts.”3

The Orioles increased their East lead to two games with the victory as Detroit was losing to New York, 12-3. The Birds, however, wouldn’t win again for a week, losing seven in a row before defeating the White Sox in Chicago, 5-2, the following Saturday. An eight-game win streak later in the month, however, one that began with another wild, come-from-behind victory over the Toronto Blue Jays that saw Tippy Martinez pick off three Toronto runners in one inning, propelled them to the American League East crown. The Orioles defeated the White Sox for the American League pennant, and Mike Boddicker was named the Division Series Most Valuable Player.

The fireworks that had been scheduled for after the game as part of the ceremony were postponed until the following evening. None of the fans cared, however. Dauer’s floater was a fitting grand finale on a night that they had come to cheer Brooks Robinson once more.

I attended this game with my wife, Martha, and several friends. We had attended Brooks’ induction ceremony in Cooperstown, and we had come out to cheer my boyhood hero one more time. As we waited for the ceremonies to begin, we stayed in our seats, declaring that “This isn’t so bad.” After about half an hour, we decided that it was that bad, but since we were already wet, it didn’t matter. I don’t think we ever dried out until we got home, but that didn’t matter either because we went home happy.