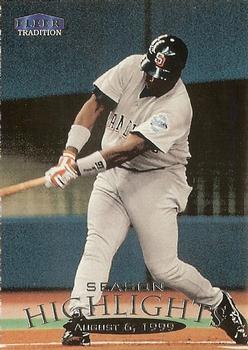 At the start of the season, the march to 3,000 looked as though it might not happen in 1999. The 39-year-old Gwynn missed 44 games in the first half of the season with calf injuries. After a memorable All-Star Game in Boston where Gwynn assisted Ted Williams in throwing out the ceremonial first pitch, he returned to regular play. At the end of July, Gwynn was within nine hits of 3,000. On August 4, three hits against the St. Louis Cardinals, including a grand slam, brought Gwynn to 2,998. On August 5, he had one hit in four at-bats, a ninth-inning double to reach 2,999. This was the same game in which Mark McGwire hit his 500th and 501st home runs. From St. Louis, the San Diego Padres traveled to Montréal for a series against the Expos.

On Friday, August 6, 1999, at 7:00 P.M., the crowd of 13,540 at Olympic Stadium1 watched Quilvio Veras begin the game with a single off Expos rookie pitcher Dan Smith. Gwynn, the second batter, hit a 1-and-2 pitch into center field. Those listening to the Padres broadcaster Jerry Coleman heard, “There’s a drive, right-center field, base hit. And there it is. Ohhhh, doctor! You can hang a star on that, baby. A start for the ages for Tony Gwynn. Number 3,000.”2

After arriving safely on first base, with the crowd offering a lengthy standing ovation, Gwynn hugged Padres first-base coach Davey Lopes and shook the hand of Expos first baseman Brad Fullmer. The first-base umpire, Kerwin Danley, one of Gwynn’s college teammates at San Diego State University, also congratulated Tony with a handshake and hug. The full roster of Padres coaches and teammates soon joined Gwynn at first base to congratulate the newest member of the 3,000-hit club. Gwynn also received a hug from his mother, Vandella Gwynn, who was celebrating her 64th birthday; his wife, Alisha; and his daughter, Anisha. Teammate Reggie Sanders retrieved the ball, which the center fielder had thrown to second baseman Mike Mordecai. The first-base bag was also collected.3

Of the hit, Gwynn said, “The relief that you feel is the first thing that hits you. And then I started to feel emotional and then all these guys started coming over to me. When I got back to the dugout I could not sit down.”4

After the congratulations for the historic moment and an out by Reggie Sanders, Phil Nevin doubled to bring in both Veras and Gwynn. The rest of the Padres’ at-bat included advancing two runners on errors in the first inning and scoring two runs. Montreal manager Felipe Alou replaced Dan Smith, who lasted just two-thirds of the first inning on the mound, with J.D. Smart, who ended the inning with a strikeout of pitcher Sterling Hitchcock, the ninth batter. The Expos responded in the bottom of the first with two home runs, including one from future Hall of Famer Vladimir Guerrero. In the top of the second inning, Gwynn reached first base with a hit to center field and second base on an error by Michael Barrett, the third baseman. The first Expo to bat in the second reached base on an error by the second baseman, Quilvio Veras.

Eric Owens provided the only hit of the third inning. The fourth inning saw the leadoff batter for the Padres, Gwynn, ground out to start the fourth, and Phil Nevin hit a home run to deep left field. The leadoff batter for the Expos reached based on a Phil Nevin error and Chris Widger hit a home run that made the score Padres 7, Expos 3. Six batters registered six outs in the fifth inning. In the sixth, Gwynn saw a wild pitch, singled to right field, advanced to second base on an error by right fielder Vladimir Guerrero, and advanced to third base by a second error by Guerrero on the very next batter. The Padres also scored a run. The Expos responded in the bottom of the seventh with four runs on four hits.

In the top of the eighth, in his last at-bat of the game, Gwynn sent a line drive to right field and Ruben Rivera ran for him. In that inning, the Padres scored two runs on two hits. San Diego added two final runs on two hits and the Expos responded with three runs on two hits and an error in the ninth. Padres manager Bruce Bochy sent future Hall of Famer Trevor Hoffman to the mound to pitch to the final two batters and record the save.

The winning pitcher for the Padres, starter Sterling Hitchcock, gave up six runs in six innings. The Padres had 17 hits and scored 12 runs. The Expos fell two runs short with their nine hits. Tony Gwynn had a total of four hits to help San Diego defeat Montréal, 12-10, bringing the Padres’ record to 52-57 and raised his batting average from .316 to .326. The game lasted 3 hours and 18 minutes and added Tony Gwynn to the record books. Both teams finished the season second to last in their respective divisions.

Back home in San Diego, the Padres had opened Qualcomm Stadium that day for local fans to watch the historic game. About 5,000 people, seated in the Plaza level above the third-base dugout, saw Gwynn’s hit on the video board above the right-field bleachers. The celebration of the achievement included fireworks, which produced smoke which obscured the screen and they were unable to watch the victory celebration in Montréal.5

Three seasons after the Minnesota Twins’ Paul Molitor reached 3,000 hits, Tony Gwynn had become the 22nd player to join the elite club – and did so only one day ahead of Wade Boggs of the Tampa Bay Devil Rays, who showed Gwynn’s historic hit on the Jumbotron at Tropicana Field in St. Petersburg, Florida.6

As the 22nd player to reach the milestone, Gwynn achieved his 3,000 hits in fewer games (2,284) or at-bats (8,874) than any other hitter born after 1900. He was the 11th player to hit all 3,000 hits with one team. Gwynn reached 3,000 in 2,284 games, third fastest behind Ty Cobb and Nap Lajoie. Gwynn is the only player to reach the 3,000-hit milestone on foreign soil. Gwynn donated his helmet, spikes, pants, and bat from the game to the National Baseball Hall of Fame in Cooperstown, New York. He presented the items to Hall of Fame President Dale Petroskey and Vice President Jeff Idelson during an on-field ceremony at Qualcomm Stadium on August 13.7

1 The crowd included the author and two other research interns from the library at the Baseball Hall of Fame.