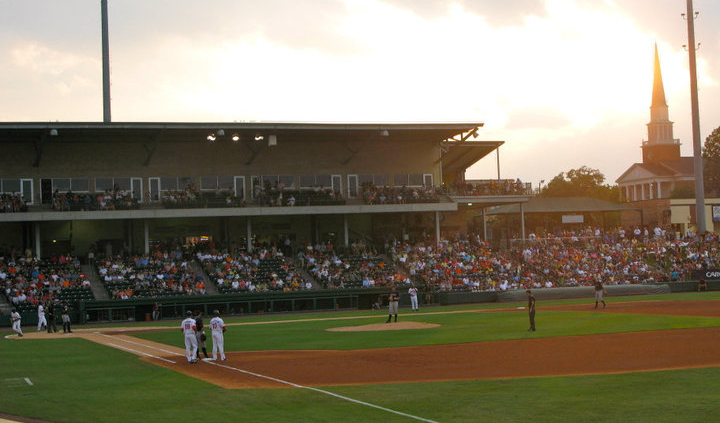 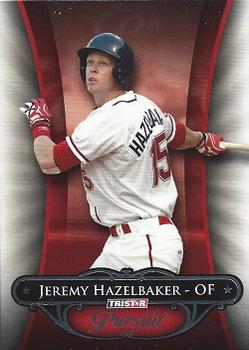 Going into the August 7, 2010, game between the Greenville Drive and the Rome Braves, six teams were locked in a battle to claim the second-half crown in the Southern Division of the South Atlantic League and earn the rights to a postseason playoff spot. Greenville (an affiliate of the Boston Red Sox) was tied for first with the Asheville Tourists, with Rome (affiliated with the Atlanta Braves) in sixth place 4½ games behind the league leaders when the game began.1 But when the night was over, notwithstanding a too-little, too-late rally staged by the Braves, Rome slipped another game behind in the race while the Drive kept pace with the Tourists atop the Sally League’s Southern Division rankings.

On a sweltering Saturday night in Greenville, 5,816 fans showed up to watch the first-place Drive take on the Braves. The game started slowly, with the Drive’s starting pitcher, Pete Ruiz, getting a pop fly and two strikeouts for a three-up and three-down top of the first for the Braves. Against Braves starter Brett DeVall, the Drive were also unable to get a base runner in the bottom of the first, with DeVall chalking up one strikeout along with a popup and a groundout.

After DH Riann Spanjer-Furstenburg grounded out to second to start the Braves’ second inning, highly touted catching prospect Christian Bethancourt reached first base on a grounder to right. With center fielder Todd Cunningham at the plate, Bethancourt was tagged out in a rundown when he tried to steal second. Cunningham ended the inning for the Braves with a grounder to second base.

In the bottom of the second, third baseman Michael Almanzar became the first baserunner for the Drive on an infield hit with one out. However, center fielder Reymond Fuentes flied out and Almanzar was forced out on a grounder to second by Christian Vazquez, Boston’s catching prospect.

Greenville starter Ruiz retired Rome on a strikeout and two popups in the third. DeVall started the bottom of the inning by walking Drives shortstop Vladimir Frias, who went to second on a hit to left by second baseman Kenneth Roque. Boston’s fourth-round pick from the prior year’s draft, Jeremy Hazelbaker, came to the plate and hit his ninth home run of the season, putting the Drive ahead 3-0 with no outs. DeVall retired Zach Gentile on a fly to right, but he hit the Drive’s next batter, DH Shannon Wilkerson. DeVall then gave up his second home run of the inning, by first baseman Reynoldo Rodriguez, putting the Drive up by five. DeVall retired Almanzar on a fly ball to center and struck out Fuentes, but the inning ended with Greenville on top, 5-0.

Rome needed base runners. Neither fourth-inning leadoff hitter and top of the batting order, Phil Gosselin, nor first baseman Osman Marval, were able to reach base. With two outs, Rome’s third baseman, Joe Leonard, became the second baserunner of the night for the Braves on a grounder to right field. However, Leonard was left stranded on the basepaths when Spanjer-Furstenburg popped up to first to end the fourth inning.

With DeVall still on the mound for the Braves, the Drive’s offense was not yet finished. With one out in the bottom of the fourth, Frias reached on a groundball up the middle, stole second, and took third on catcher Bethancourt’s bad throw. Roque hit a groundball single to the right side, scoring Frias. Roque was thrown out trying to steal second, but Hazelbaker walked and stole second base. DeVall then walked Gentile, and gave up a single by Wilkerson, scoring Hazelbaker. The Braves got out of the inning when Rodriguez flied to right, but now faced a seven-run deficit.

The fifth inning began optimistically for the Braves with Bethancourt reaching base on his second hit of the game and Cunningham hitting a ground single to left. But Rome shortstop Edward Salcedo hit into a fielder’s choice, left fielder Jake Hanson struck out, and right fielder Bobby Rauh fouled out to the catcher.

DeVall remained in the game for the Braves, getting two quick outs to start the bottom of fifth. Vasquez reached base on a single to right, but was left stranded when Frias struck out swinging.

With Ruiz still on the mound, the top of the sixth began optimistically for the Braves, Gosselin reaching on a line drive to center. But Marval hit into a double play and Leonard grounded out to shortstop to end the half inning.

Second baseman Roque led off the bottom of the sixth with a double off DeVall and scored when Hazelbaker lined a double to left field. The hit parade continued. Gentile singled to center, Hazelbaker moving to third. DH Wilkerson hit a fly to left for the first out, but Rodriguez drove the ball up the middle, scoring Hazelbaker from third and advancing Gentile to second. Almanzar flied out for the second out of the inning. Fuentes got his first hit of the night, a drive to center scoring Gentile, but was thrown out trying to make second. Greenville picked up three more runs, and now had a 10-0 lead.

In the Braves’s seventh, leadoff hitter Spanjer-Furstenburg singled up the middle, took second base on a groundout by Bethancourt, and went to third on a groundout by Cunningham. Shortstop Salcedo got the Braves on the board with a home run, ending Ruiz’s night. Drive reliever Armando Zerpa walked the first batter he faced, left fielder Hanson, who took second on a line-drive hit by Rauh. But Zerpa got Gosselin to ground out to first, leaving two on.

In the Greenville seventh, Braves reliever Andrew Wilson walked Vasquez but induced Frias to hit into a double play. Roque then hit a groundball through the left side for a double and took third on Hazelbaker’s single. Gentile’s single up the middle scored Roque but Wilkerson grounded into a force out at second, ending the inning. Greenville now led, 11-2.

With one out in the top of the eighth, Zerpa walked Leonard, who took second on a hit up the middle by Spanjar-Furstenburg. With two on and one out, Bethancourt collected his third hit of the night, his 16th double of the season, scoring Leonard from second and sending Spanjar-Furstenburg to third. He scored on a groundout by Cunningham, and the half inning ended when Salcedeo struck out swinging. It was 11-4, Drive.

Pitcher Chris Anderson entered the game for Rome in the bottom of the eighth and walked Sean Killeen, pinch-hitting for first baseman Rodriquez. Killeen took third on a double by Almanzar, and scored on a grounder by Fuentes. Anderson struck out Vazquez and Frias, stranding Almanzar at third.

In the top of the ninth, reliever Anatanaer Batista replaced Zerpa for the Drive and Killeen remained at first base. Hanson led off with a single, and went to third on a double by Rauh. With runners at second and third and nobody out, Gosselin singled to right field, Hanson scoring and Rauh advancing to third. Rauh scored on a sacrifice fly by Marval. It was now 10-6, Greenville. Gosselin took second on a ball that got past Vazquez, but he ended the game still on second when Leonard struck out swinging and Spanjar-Furstenburg was called out on strikes. Although the Braves scored six runs in the last three innings, the rally was too late to overcome the 12 put up by the Drive, and the Braves lost ground in the pennant race.

Nine of the Drive reached the major leagues, and 14 of the Braves. 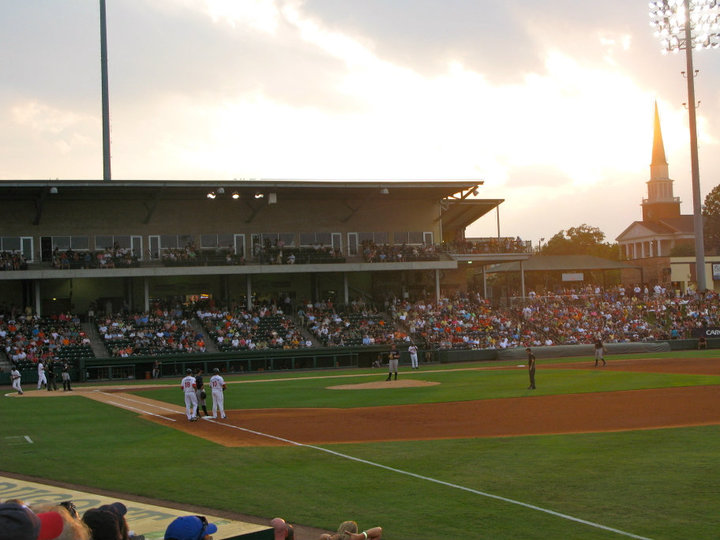 Other than the article cited in the Notes, all information comes from the box score and game recap summary downloaded from the MiLB website.