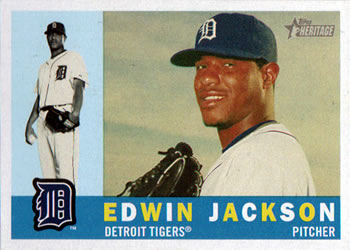 Edwin Jackson is unlikely to be inducted into the Baseball Hall of Fame. But if he were, it would be difficult to decide what cap he would wear. In his 17-year career he pitched for a major-league-record 14 different teams,1 one to three years with each team, including two separate stints with the Washington Nationals. His last full season with one team was 2014 with the Cubs. On July 21, 2019, he signed with the Tigers as a free agent, returning to the team where he had earned his only All-Star appearance — in 2009, a full decade earlier. After a two-week stint in the minors with the Toledo Mud Hens, he was called up to the majors again.2

Neither team in this game would sniff the postseason. The Royals were 46-76 and the Tigers were 34-79, fourth and fifth in the AL Central, 30 and 35 games behind the Twins. Nevertheless, 21,475 fans came on a pleasant Friday evening to see Jackson make his first major-league start since June 6, when he pitched for Toronto against the Yankees.

Jackson took the mound hoping to put his forgettable 2019 Toronto stats behind him (1-5, 11.12 ERA). The first batter he faced, Whit Merrifield, bounced the second pitch off the center-field wall. Center fielder Victor Reyes leapt and missed the ball near the wall. By the time the fielders corralled the ball and threw it home, Merrifield had slid across the plate with his second inside-the-parker of the year. Merrifield was fast: He was leading the league in triples. The home run was all Jackson allowed, though: Alex Gordon lined out and Hunter Dozier and Jorge Soler struck out.

Cheslor Cuthbert and Ryan O’Hearn grounded out to start the second. Bubba Starling doubled into the left-field corner but was left there when Meibrys Viloria flied out to the warning track. The sun was still hitting that part of the park but Castro made the catch.

In the bottom of the second, Reyes hit a two-out single but was caught stealing second.

All Jackson allowed in the top of the third was a walk to Gordon.

Goodrum, who had been batting when Reyes was caught stealing to end the second, flied out. Miggy walked again. Lugo hit a two-out single over the mound for his first multihit game since he rejoined the team earlier in the week, but Castro grounded out to end the inning with two on base.

Jackson allowed a leadoff single to Soler to start the fourth, but allowed no other baserunners (although Soler did make it to second on a passed ball). Keller also allowed only a single in the bottom of the inning.

In the top of the fifth, Jackson needed only 11 pitches to get three groundouts.

Goodrum started the home half of the fifth with a triple, losing his helmet rounding second, then diving into third. The triple wasn’t just about Goodrum’s speed: The ball took an odd bounce off the short angled section of the wall in right center. Miggy singled into left past the diving third baseman, scoring Goodrum. Dixon struck out for the second time for the first out, followed by Lugo grounding into a double play, but the Tigers had increased their lead to 3-1.

Although Jackson walked Gordon on six pitches to open the sixth, he got the three outs he needed on just five more pitches. Since he finished the inning at only 88 pitches, perhaps he could go further into the game.

Rookie Jake Rogers added to the Tigers’ lead in the sixth by hitting a two-out homer near the left-field foul pole. It was only the third of his career and briefly raised his batting average to .200.3 Keller, now over 100 pitches, allowed back-to-back singles to Jordy Mercer and Reyes. The Royals tried a mound visit, probably stalling to allow Tim Hill more time to warm in the bullpen. The mound visit didn’t help: Keller’s first pitch to Goodrum went to the backstop, allowing Mercer to score standing. Goodrum grounded out, but the Tigers were leading 5-1.

At the beginning of the seventh, up 5-1, Tigers manager Ron Gardenhire was debating whether to pull Jackson (who had pitched no more than five innings in his Mud Hen starts). Jackson told Gardenhire, “Let’s do this thing. You can come get me if one guy gets on.” Gardenhire agreed.4 Jackson got O’Hearn out on a fly ball to shallow left, while there was double-barreled action in the Tigers bullpen. Starling hit a little looper into right for a single, so Gardenhire followed through, bringing in Nick Ramirez as a reliever. Jackson left the mound to applause from the crowd. Ramirez finished the inning quickly: three pitches for two groundouts.

Side-armer Hill pitched a solid bottom of the seventh. Miggy lined out to right. Hill fielded Dixon’s squibber in front of the plate in time for the out at first. He did allow Lugo’s third hit of the night but Castro grounded into a force out at second for the third out.

Ramirez, often a multi-inning reliever, pitched the eighth. Although he walked Merrifield, Gordon grounded into a double play to erase him. The Tigers’ TV announcers noted that Tigers infielder Gordon Beckham5 (with his 10 years of major-league experience) had spent some time with the Tigers’ young first and second basemen practicing the footwork to turn double plays earlier that day. Both Dixon at first and Goodrum at second had less than two years’ major-league experience. Dozier grounded out to end the frame.

Hill continued pitching the bottom of the eighth. Demeritte was credited with a ground-rule double when a young Royals fan at the corner of the stands reached over the fence, scooping up the ball in his cap as the ballgirl jumped out of the way. Security gave him a talking-to but did not eject him. The next three at-bats would not have allowed Demeritte to score even if he had reached third, so the fan interference didn’t change the score: Rogers struck out, Mercer popped out, and Reyes struck out.

Michigan native John Schreiber, another side-armer, made his major-league debut in the top of the ninth with his parents watching from the stands. His first experience was not auspicious: He gave up a homer to Soler on his fifth pitch. Cuthbert lined out for his first out, but with the score now 5-2, Tigers, Gardenhire had two relievers warming in the bullpen. O’Hearn hit a seeing-eye single. After Starling lined out to left, Viloria singled as well, bringing the tying run to the plate. Gardenhire brought in Joe Jiménez to face Lopez. Schreiber left the mound to cheers from the crowd.6 Jiménez got Lopez to fly out to end the game with the final score 5-2, Tigers, sealing Jackson’s second win of the year.

Jackson looked good in his return to Detroit: He earned a Game Score of 63, his highest of the year. Several of his pitches measured 95-96 MPH, even as much as 98. Unfortunately, this game was not the start of a comeback: He appeared in seven more games for the Tigers in 2019, accumulating an 8.47 ERA and a 2-5 record. But for one summer evening, he reminded the Tigers fans of the Jackson of a decade earlier.

The last chapter in Jackson’s career may not yet be written: He signed with the Diamondbacks in 2020, pitched in five spring-training games, but was released on May 22, 2020.7

In addition to the sources listed in the notes, the author consulted Baseball-Reference.com and Retrosheet.org, and viewed the recorded Detroit broadcast on MLB.TV.

3 He did manage one more home run before year-end, but ended the season with a .125 BA.

6 His next outing, the next day, wasn’t any better, but when he returned to the team in September he was reasonably effective: 11⅓ innings in relief with a 4.76 ERA.