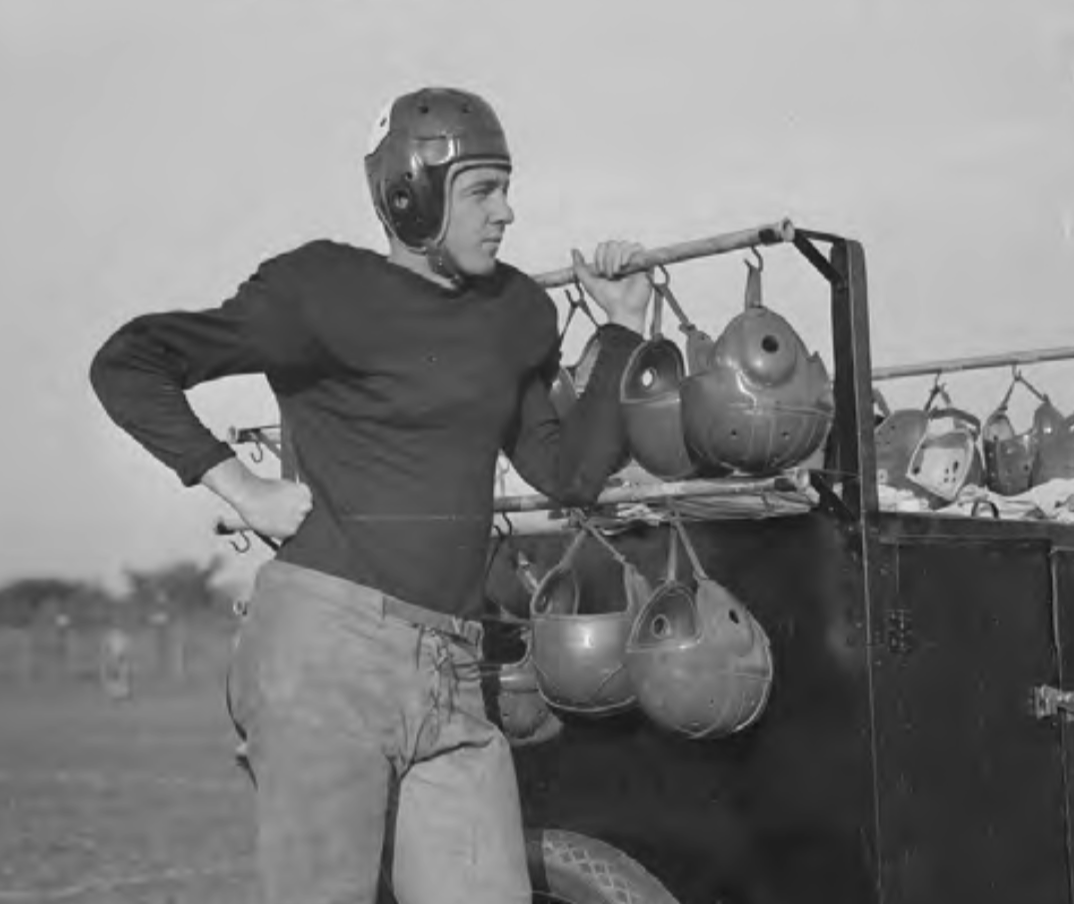 From the birth of the National Football League, in 1922, it took three years for Boston to host a professional football game. At the time, collegiate football reigned supreme, and with Boston area universities like Harvard, Boston College, Tufts, and Holy Cross all fielding powerful amateur teams, the professional variety held little allure for Beantown’s sports fans. In fact they, like fans of most other cities, generally looked down upon men who accepted money for play.

That began to change on December 9, 1925. It was perhaps fitting, given their affinity for the collegiate game, that the first time Boston’s football fans witnessed professionals clashing, they had the opportunity to watch one of the most electrifying players ever to set foot on a college gridiron. By the time Harold “Red” Grange completed his three-year football career at the University of Illinois, he had permanently etched his name as one of the greatest players in the annals of his sport. From 1923 through ’25, over 21 collegiate games, Grange rushed for 2,071 yards, averaging 5.3 yards per carry; passed for 575 yards, in an era when the forward pass was used sparingly; and tallied 34 touchdowns; additionally, in era of two-way football, Grange totaled six interceptions as a defensive back, and was also a sensational kick returner.1 Unquestionably his greatest single performance occurred on October 18, 1924, when, in a legendary effort before an estimated crowd of 67,000 at home versus the University of Michigan, the Galloping Ghost tallied 402 rushing yards, 78 passing yards, and five touchdowns (four on the ground and one through the air), in a 39-14 dismantling of the Wolverines.

It was his style of play that made the Illinois back so exciting. Grange, wrote famed sportswriter Grantland Rice, runs “with almost no effort, as a shadow flits and drifts and darts.” Indeed, there was no wasted motion in his running, “only the effortless, ghostlike weave and glide upon effortless legs with a body that can detach itself from the hips – with a change of pace that can come to a dead stop and pick up instant speed, so perfect is the coordination of brain and sinew.”2 Such divine skill had left many a college defender gasping for air when Grange ran by.

At first Grange had no intention of playing professional football; once graduated, he would apply himself to some profession with the same intensity he brought to the playing field. But when an entrepreneur named Charlie Pyle convinced Grange that he could one day become a millionaire by joining the fledgling NFL, Grange found Pyle’s entreaties hard to resist, and signed a contract to join the professional ranks. Pyle, with Grange’s consent, immediately sold Grange’s contract to the Chicago Bears, who promised Grange a 50-50 split of all gate receipts; and in November 1925, Grange joined the NFL.

It didn’t take long for Grange or his fans to realize that the professional brand of football was entirely different from its collegiate counterpart. For Grange, it was to be a painful reality; and for the fans at Braves Field who came that day to see the rushing king, a bitter disappointment. Seeking to quickly cash in on the fame of their new star, the Bears, with their co-owner George Halas, began a barnstorming tour that soon took a physical toll on Grange, “The Wheaton Ice Man.”3 After his professional debut on November 26, at Wrigley Field versus the Chicago Cardinals, the Bears ranged across the country and played as many as three to four games a week, an unmerciful schedule that left the team battered and bruised. As their train pulled into Boston on the morning of December 9, “the Bears were in a pitiful condition,” Grange later recalled, “with many of us bandaged from head to foot. I was in particularly bad shape. I had hurt my left arm in New York and it was still badly swollen. Andy Lotshaw, the Bears trainer, worked feverishly all night on the train to help ease our miseries and prepare for the next assault. … Under such conditions it was to be expected the Bears would not fare well against the Providence eleven.”4

In fact, they did not, and by the time Grange’s day ended, he lamented years later, “I was booed for the first time in my football career.”5

The day was miserable from the start; it was a frigid afternoon, and the “cruelly cold” weather had left the field as “hard as a board.”6An estimated 18,000 fans were in attendance. The Bears’ opponents, the Providence Steam Roller, were in their first season in the NFL; yet, if the Bears, a charter member of the league, were “as big and powerful a set of men as ever stepped on a football field,”7 the game ultimately belonged to Providence, which “throughout the game … kept the Bears jammed back against their own goal line. Providence did not have enough power to slam through the massive western defense to a touchdown, but they took advantage of two breaks, one of which they forced.”8

Grange’s only highlights occurred early in the game. In the first two minutes he caught a punt on his own 10-yard line and, using his customary zig-zag running style to elude tacklers, returned the ball to near the Bears’ own 25. A few plays later, the Bears having punted and Grange now on defense, Providence’s diminutive tailback, from nearby Salem, Massachusetts, Cy Wentworth, just 5-feet-8 inches tall and 160 pounds, broke through the center of the Bears’ line and ran 40 yards to Chicago’s 21, before Grange tackled him and forced a fumble, saving a sure Providence touchdown.

Several times on offense Grange made rushing attempts, trying to burst around the end, but each time the Bears protection broke down and Grange “came down like a log when tacklers hit him.”9 He also attempted several passes, but each time the ball fell incomplete. As the game wore on, every time Grange touched the ball the fans jeered and offered him mock applause, leaving the Galloping Ghost standing forlornly on the sidelines, aloof from his teammates and for all intents as if he wanted to be anywhere else at that moment than Braves Field. With his painful forearm exacerbating Grange’s sour disposition, he left the game for good after the third quarter.

Grange’s teammates fared little better. On a day when both teams’ defenses ruled, Chicago’s most productive player was Hunk Anderson, its punter. With the brutal conditions, scores were hard to come by. Providence was first to get on the board. In the opening quarter, with Chicago pinned deep in its own territory, Anderson attempted to punt the Bears out of trouble. However, smashing through from his right end position, the Steam Roller’s Red Maloney blocked the ball, and it bounded into the end zone, where Maloney fell on it. As it turned out, though, the ball had first struck a fence behind the end zone and, by the rules of the day, was automatically ruled dead, resulting in a safety rather than a touchdown. So Providence led 2-0.

The second quarter score again involved Anderson. Near the end of the second period, with the score still 2-0, he dropped back to punt from his own 45-yard line. This time, though, the center snap soared past him and Providence’s Franny Garvey, a Holy Cross graduate, from Worcester, Massachusetts, scooped up the ball and ran untouched into the end zone for a touchdown. When Maloney drop-kicked the extra point, Providence led, 9-0.

With no scoring in the third quarter, the Bears finally got on the board in the fourth. In their most productive drive of the day, again from deep in their own end, quarterback Joey Sternaman,10 all of 5-feet-6 inches and 152 pounds, tossed a pass to tailback Johnny Bryan, who caught the ball at his own 25-yard line and raced 75 yards into the end zone. When Sternaman missed the point after touchdown, the score stood Providence 9, Chicago 6.

And that was the score when the gun sounded to end the game.

For Red Grange the day brought one more humiliation. As he made his way towards the tunnel to leave Braves Field, a small crowd gathered and blocked his exit. In short order, the fans became unruly. Shielding his good friend, Hunk Anderson struck one of the spectators who tried to get at Grange, and two bystanders began a fight that soon found them rolling around and choking each other, before the police were able to restore order.

That night, Grange and his teammates boarded a train for Pittsburgh, where, worn out, nervous, and bruised, they were to play another game the next day.

In all, Chicago played 18 games in 66 days, with Grange scoring 17 touchdowns. The Galloping Ghost played eight more seasons in the NFL, retiring in 1935 at age 32.

In 1963 Grange was elected as a charter member to the National Football League Hall of Fame.

Morton, Ira, The Red Grange Story: An Autobiography, as told to Ira Morton (Urbana and Chicago: University of Illinois Press, 1957 and 1981).

1 The University of Illinois official statistics were used for these totals. They can be found at http://fightingillini.com/sports/m-footbl/grange-stats.html.

2 Ira Morton, The Red Grange Story: An Autobiography, as told to Ira Morton, (Urbana and Chicago: University of Illinois Press, 1957 and 1981), Kindle edition, 9.

10 In researching this game, the author consulted several periodicals of the day. It should be noted that due to the inaccuracy of reporting during the period, multiple sources differed in their accounts of the game. Not only were attendance and yardage figures different, but also different players were often credited with results. For example, the Associated Press credited the Bears’ Lawrence Walquist with throwing the pass to Bryan, but the Boston Herald credited Sternaman, as does pro-football-refrence.com. Here, an attempt was made to select the most accurate account of the game.