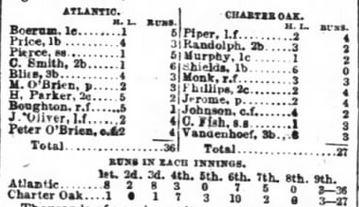 “Yesterday the hazardous feat of playing a match of base ball upon skates was accomplished by the Atlantic and Charter Oak Base Ball Clubs. What next?”
— Brooklyn Daily Eagle, February 5, 1861

“Play was lively and exciting,” reported the New York Times, “not as much difficulty being experienced from the use of skates by the players as was expected.” Baseball players from the Live Oak, Olympic, Lone Star, and Flour City clubs of Rochester, New York, gathered on January 14, 1860, and “experimented with a baseball game with ice skates.”1 Baseball historian Peter Morris commented that with the growing popularity of both baseball and ice skating in the 1860s, “it was inevitable that someone would try and combine them.”2 On December 28, 1860, the Lone Stars accepted a challenger by Live Oak to a baseball match on skates on New Year’s Day 1861. Near the Float Bridge on Rochester’s Irondequoit Bay, 2,500 spectators watched a game “of the most exhilarating description, as was attested by the glowing cheeks of the respective players,” wrote the New York Clipper.3 The Clipper then asked, “Cannot some of our New York clubs get up a contest on one of our Central Park ponds? Let not our Rochester friends be ice-olated in this respect.”

Baseball on ice came to New York on February 4, 1861, not in Central Park, but on the so-called Litchfield Pond, aka Washington Pond (for Brooklyn’s famed Washington Skating Club).4 The 10 acres were located along Fifth Avenue and Third Street in Brooklyn.

The Brooklyn Atlantics would compete on skates against Brooklyn’s Charter Oak.5 The Atlantics were the dominant team of the National Association of Base Ball Players (NABBP) throughout the 1850s and 1860s. The Atlantics, officially organized in 1855, “have always and at all times had a nine from whom any rival club might almost despair of winning any lasting laurels,” wrote Charles A. Peverelly in The Book of American Pastimes (1866).6 They had won another championship in 1860. The Charter Oak club from South Brooklyn was a lesser-known club organized in 1857.7 Harold Seymour called them “the leaders in sartorial splendor,”8 based on a description of their uniform in Porter’s Spirit of the Times: “a white cap with blue peak, pink shirt with white facings, stars, & c, black belt, upon which is inscribed ‘Charter Oak’ in full, and white pants with pink stripes.”9 No such detailed description was given for this game. The Atlantics wore red jackets with blue facings while the Charter Oak were dressed in plaid.

The prize for the winner was a silver ball, the size of an ordinary baseball, donated by a Mr. Litchfield,10 president of the Fifth Avenue Railroad Company, for whom the pond was nicknamed at the time.11 The weather was pleasant. “For a February day,” wrote the Brooklyn Daily Eagle, “the weather might claim the prefix ‘fine.’ Cold, but clear and bracing, the sun coming out strong every now and then, thawing the embankment into a puddle, and though very comfortable in other respects, rendering it disagreeable under foot.”12 The game was played on the ice nearest Fifth Avenue, “in defiance of ominous-looking cracks or fissures, through which the water oozed up, produced by the tremendous pressure” wrote the Eagle.13

The streets were lined with people who came to see their baseball heroes who “dreamed not and cared not for broken bones and bruised flesh.”14 One-third of the crowd was estimated to be women and children.15 Some avoided the “triple row of spectators” and watched the game from their carriages, which provided “a good view of the enthusiastic and excited ball players,” wrote the Clipper.16 The pond was dotted with skaters ‘like feathered Mercuries,” wrote the Eagle.17 The crowd was estimated at between 15,000 and 30,000 spectators (depending on the source), “a large portion of whom were on skates,” wrote the Brooklyn Evening Star. Some arrived via the Greenwood and Atlantic street cars,18 ensuring that “the Railroad Companies had a rich harvest in the increase of travel.”19 The enormous crowd made the pond “uncomfortably crowded for skating purposes,” wrote the Star,20 while the Clipper remarked that “it really seemed as if the players would not have a rod of ice to display their skill upon.”21

Police were out in full force as “it was with utmost difficulty that the crowd could be kept from pressing too closely upon the clubs,” the Times wrote, but “everybody seemed bent upon being happy and making others so.” Those not close enough to see the game were not terribly disappointed but “amused themselves in skating at other points.”22 When they needed a break from the chilly air, “the refreshment men were not idle,” wrote the Star. “Booths were provided, and hot coffee and cakes and the all persuasive lager were in large demand.”23

The game began at 3 P.M. Each team fielded 10 players, with each adding an extra catcher. The base areas were marked with red paint. A Mr. Ellenbeck from the Live Oak Club was chosen as the umpire, while John Oswald from Charter Oak and G.W. Moore of the Atlantic club were chosen as scorers, who would definitely have their work cut out for them that afternoon.

Not surprisingly, the beginning of the game saw “several of the players, in their anxiety to stop or catch the ball, by a miscalculation were brought summarily, and in one or two instances rather unpleasantly, in connection with the ice,” wrote the Times.24 Charter Oak batted first and scored a run, and in their half of the first, the Atlantics scored eight runs. We do not have a play-by-play of the game, as the Clipper noted the futility. “We shall not attempt to follow up or criticize the succeeding innings, as it will be readily understood that the game, when played upon the ice with skates, is altogether a different sort of affair from that which the Clubs are familiar with.”25 Charter Oak had great skaters in Johnson, Jerome, and Phillips, “but the balance of their players could not support them. … (T)heir opponents, as a body, were their superiors.”26

The score was Brooklyn 18-2 after three innings, but the Atlantics grew overconfident and careless, in the Clipper’s opinion, allowing Charter Oak to score 20 runs in innings four, five, and six. Brooklyn’s Dickie Pearce, today credited as a pioneer in creating the shortstop position, “proved himself as good a short stop on the ice, as he is on a summer’s day; he made several splendid fly catches, and for an inning or two, caught capitally behind.” Pitcher Matty O’Brien, first baseman John Griffith Price, second baseman Charles J. Smith, and the first catcher, Folkert Rapelje Boerum, illustrated that “the championship boys can turn out a good crowd of skaters,” in the Clipper’s analysis.27 The New York Times said nearly all 20 players were experts in skating and “played as well on runners, as when on terra firma.”28 The Star said “the batting, catching, and fielding were remarkably good, when the unusual and uncertain footing of the player is remembered.”Pearce and Oliver of the Atlantics “exhibited their characteristic abandon, and danced, leaped, turned somersaults, and indulged in other eccentricities.”29

The final score was the Atlantics 36, Charter Oak 27. The Clipper was enthusiastic, writing, “We hope to chronicle many similar pleasant and exciting trials of skill during this and future winters.”30 The game was considered a success, and another match, between the Atlantics and Pastimes, was scheduled for two days later.31

The crowd was definitely entertained that day; the Eagle commented, “There lurks within the breast a tendency to laugh at the mishaps of one’s neighbors,” and “from the frequency of the tumbles, players as well as non-players, the conclusion is inevitable that many a participant in the sports of the day retired to bed with a sore head and aching bones.”32

While Brooklyn was skating, historical events were happening elsewhere. About 1,000 miles away, in Montgomery, Alabama, Howell Cobb, an ancestor of Ty Cobb,33 spoke to the newly established Confederate States of America, which had seceded from the United States. “We meet as the representatives of sovereign and independent States, who by a solemn judgment have dissolved all the political association which connected them with the Government of the United States,” Cobb declared.34 The Civil War would begin in April.

Baseball played on ice declined in popularity over the next few decades, although there were examples of it still being played in the early 20th century.35 Beadle’s Dime Base Ball Player in the 1870s even included a section entitled “Rules for Games on Ice.”36 The fad seemed to have worn off relatively quickly for some, however. Annoyed, the Eagle wrote, “We hope we shall have no more ball games on the ice. … Playing on skates is mere tomfoolery. … If any of the ball clubs want to make fools of themselves, let them go down to Coney Island, and play a game on stilts.”37

The box score from the New York Times:

In addition to sources listed in the Notes, the author benefited from the following:

Morris, Peter. Base Ball Founders: the Clubs, Players, and Cities of the Northeast that Established the Game. (Jefferson, North Carolina: McFarland, 2013).

5 Some accounts give the team name as Charter Oaks, but Charter Oak is used here because of the name inscribed on their uniforms.

6 Charles A. Peverelly, The Book of Pastimes: Containing a History of the Principal Base-Ball, Cricket, Rowing, and Yachting Clubs of the United States (New York: Self-published, 1866), 416.

9 Porter’s Spirit of the Times, June 20, 1857: 245; Charter Oak were also known for playing at the Carroll Park Grounds, a site “too narrow(;) a ball hit to right or left field going in among the crowd who congregate among the sidewalks. (“Putnam vs. Charter Oak,” New York Clipper, July 21, 1860: 108). See also “Brooklyn’s Ancient Ball Fields,” covehurst.net/ddyte/brooklyn/ancient.html, retrieved November 27, 2015.

36 The author found such an example in the 1874 edition while viewing the original publication at the Giamatti Research Center at the National Baseball Hall of Fame in Cooperstown, New York.