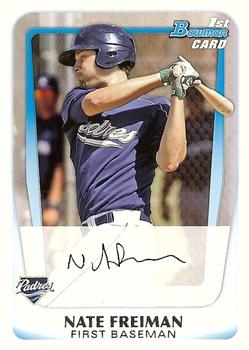 There’s nothing like an eight-run inning for the home team to infuse a little more excitement into a ballpark crowd.

The Diamond at Lake Elsinore attracted 3,883 paying patrons on the evening of July 10, 2011. The game-time temperature was 89 degrees, clear and with a mild 8 MPH wind blowing from right to left.

The California League’s Lake Elsinore Storm is the Class-A Advanced affiliate of the San Diego Padres. The team began in 1994 as a California Angels affiliate, and won league championships in 1996, 2001 (its first year as a Padres affiliate), and 2011. In the latter year, the championship may have been a considerable surprise because the Storm were a sub-.500 team (69-71) in the regular season. Pouring it on when the moment called for it, they prevailed in the playoffs.

That was also the story of the July 10 game. It was a game that featured a lot of raw prospects. Stormin’ the bigs? Twenty members of the Storm ultimately made the majors, but only two of them played in this game against Visalia. There was first baseman Nate Freiman, who debuted with the Oakland Athletics on April 3, 2013.1 And this evening’s starting pitcher, left-hander Andrew Werner. Werner pitched for the Padres (2-3, 5.58), debuting on August 22, 2012.2

Werner gave up two runs in the top of the first inning as Visalia took the early lead, but the Storm matched them with two runs of their own in the bottom of the first. Pitching for Visalia was right-hander Eric Smith, who had entered the game with a record of 3-9.3

Neither team scored in the second or third. Werner held the Rawhide scoreless in the top of the fourth. Then the Storm broke out.

Smith was working the mound, but didn’t record even one out in the fourth. By the time the books were closed on him, he had been charged with five more earned runs. The biggest two hits of the Storm’s inning were a bases-loaded double by shortstop Jeudy Valdez, driving in all three runners, and a two-run single by left fielder Wande Olabisi. The Dominican Valdez drove in 92 runs for the Storm in 2011, second only to Freiman’s 111. Olabisi was a native of Lagos, Nigeria, who had gone to high school in Houston and then to Stanford University.4 Cristian Beltre took over mound duties for Smith. He got the side out, but not before eight runs in all had crossed the plate.5

By the time the fourth inning was over, Storm manager Carlos Lezcano was no doubt pleased. Jason Hardtke managed Visalia.

Visalia tagged Werner for a couple of runs in the top of the first. The score was 10-4, Storm. Beltre pitched a scoreless bottom of the fifth.

Lezcano had right-hander Jeremy McBryde work the sixth. He gave up one run.6 The Storm got one run back off Beltre, relieved by lefty Taylor Sinclair. He got the final out of the sixth, and all three outs in a scoreless seventh.

In the top of the seventh, though, Visalia score three more times, drawing within striking distance by closing the gap to 11-8. Lefty Zach Herr started the seventh for Lake Elsinore and was charged with all three runs. He was replaced by lefty Dustin Pease, who got the final out (and earned himself a hold). Justin Ray, a righty, worked the top of the eighth and shut out the Rawhide.

The Storm scored four more runs in the bottom of the seventh, off Yonata Ortega. The big hit was a three-run double by Jonathan Galvez.7 That made it a more comfortable 15-8. Ray shut out the Rawhide in the top of the ninth, earning himself a save.

The author largely relied on a box score of the game, courtesy of Matt Rodriguez and Dominick Lorenz of the Storm; the Press-Enterprise (Riverside, California) game story and line score, courtesy of Andy McCue; and Baseball-Reference.com.

2 He surrendered one or more earned runs in every one of the eight games in which he appeared, but he made the big leagues and had his shot.

5 Beltre was 3-5 at season’s end, and did not continue a career in pro ball.

7 Both Jason Ray and Jonathan Galvez made it to Triple A, but no further. Ortega made it to Double A.