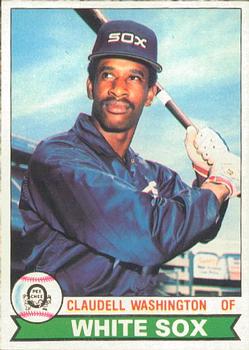 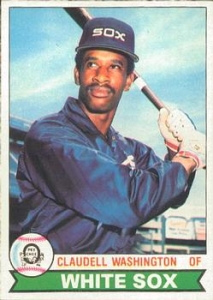 The 1979 White Sox were accustomed to excitement in Comiskey under the ownership of the promotional Bill Veeck, but it wasn’t usually from the ballgame. That changed on July 14, when outfielder Claudell Washington slammed three home runs against the Detroit Tigers. A strong player who made it onto the American League All-Star team in 1975 at the age of 20 while playing for the Oakland Athletics, his performance wasn’t that of a slugger with only 10 home runs in that season. White Sox manager saw potential in Washington, stating that “He has unlimited ability, and all he needs is day-to-day consistency.”1

Washington’s performance couldn’t have come at a better time for the struggling White Sox. The team had a 40-49 record going into the game, and had dropped the first three games in the series, including a forfeited second game of a doubleheader after the ill-fated Disco Demolition Night ended with members of the crowd of 50,000 storming the field, having to be chased off by Chicago riot police. That didn’t stop Veeck from continuing promotions, however, and Washington’s home-run feat was witnessed by an Irish Night crowd of almost 24,000, “who danced gleefully in the aisles” despite the 95 percent humidity of a classic Chicago summer.2

The Tigers had lost four out of the last five against the Minnesota Twins and Milwaukee Brewers, putting them at 41-44 going into the series against the White Sox.

On the mound for the White Sox was left-handed Ross Baumgarten, a 20th-round draft pick by the White Sox in 1977 who was having a breakout season with an 8-5 record going into the game. Baumgarten opened strong, retiring Ron LeFlore and Lou Whitaker on grounders. A walk put Jerry Morales on base, but a fly ball from Lance Parrish ended the inning.

Steve Baker had a shakier start to his first full season with the Tigers than Baumgarten. After a 2-4 season in 1978, Baker was looking far worse; he had racked up five losses to one win by July 14. After striking out leadoff hitter Alan Bannister, he yielded a double to center field by Ralph Garr, who scored on a single by Jorge Orta.

The Tigers responded quickly. Baumgarten walked Rusty Staub with one out in the second. Staub went to third on a single by Lynn Jones and he scored on a fielder’s choice grounder to shortstop by Tom Brookens. (Jones was out at third.) Alan Trammell’s double to deep left field plated Brookens and gave the Tigers a 2-1 lead.

Washington struck in the bottom of the third, smacking a pitch by Baker into the right-field stands, tying the score.

The Tigers picked up another run in the fourth when Milt May walked, was sacrificed to second by Jim Morrison, and was driven home by a single from player-manager Don Kessinger. Leading 3-2, the White Sox never looked back.

Baker was relieved in the fifth by Milt Wilcox, a veteran righty who was normally a starter. The White Sox jumped on Wilcox in the sixth. Morrison singled, was sacrificed to second by Kessinger, and was driven home by Alan Bannister’s triple. Ralph Garr homered to right for two more runs. Wilcox struck out Orta and Lamar Johnson, but the White Sox had expanded their lead to 6-2.

Despite the heat and humidity, Baumgarten kept cool by ducking into the air-conditioned clubhouse while his team was batting. “I’d just wait until there were two outs and go back to the bench,” said Baumgarten. “No problem, especially when they give you all those runs to work with.”3

Wilcox faltered again in the seventh. Washington homered to right and Torres followed with another. The struggling Wilcox gave way to closer Dave Tobik. He got May on a fly out but Morrison followed with a round-tripper to left, making the score 9-2.

The Tigers showed signs of life in the ninth. Jerry Morales and John Wockenfuss homered, making the score 9-4. Staub singled and Baumgarten was relieved by Ed Farmer, a recent arrival via trade from the Texas Rangers in mid-June. After a wild pitch to Lynn Jones that let Staub take second, Farmer finished the inning with two groundouts.

In the bottom of the eighth, Tobik allowed a single by Moore and walked Orta. After Mike Squires struck out, Washington stepped to the plate and smacked homer number three, this time to left, and the White Sox led 12-4. “I felt tired and drained by then and I really didn’t think the ball would carry that far,” Washington said after the game. “I hit one better than that last night and it didn’t carry, even though the air was a lot heavier this time.”4

The Tigers offense couldn’t muster a run in the top of the ninth, ending the game at 12-4. The White Sox had bashed six homers, the second most the club had ever managed in a game, behind the seven slugged in a 29-6 rout of the Kansas City Athletics in 1955.

“This is a night I’ll cherish,” said Washington. “Nothing like it has ever happened to me.”5 While it may have been the first, it wasn’t the last. Traded to the New York Mets the next season, Washington smacked three balls out of the park on June 22 to secure a 9-6 win over the Los Angeles Dodgers. Washington is one of only a handful of players who have hit three home runs in a game in both leagues.

As for the 1979 game, the Tigers returned the favor the next day, taking the White Sox down 14-5, a feat the Tigers accomplished without a single home run. The Tigers had a strong second half of the season, finishing at 85-76, good enough for fifth place in a strong AL East.

The one-time performance wasn’t enough to turn the tide of the beleaguered White Sox, who were plagued with injuries and roster changes. “How do you sing ‘Take Me Out to the Ball Game’ when your team is losing 14-3?” wondered the Chicago Tribune after the Tigers routed them in the Sunday game.6 Washington remained hopeful though: “It’s only a matter of time until I really show Chicago fans what I can do,” he said after his three-homer performance. Despite the optimism, the White Sox failed to match their 12 runs scored for the rest of the season, and ended with a record of 73-87, coincidentally finishing fifth in the AL West.