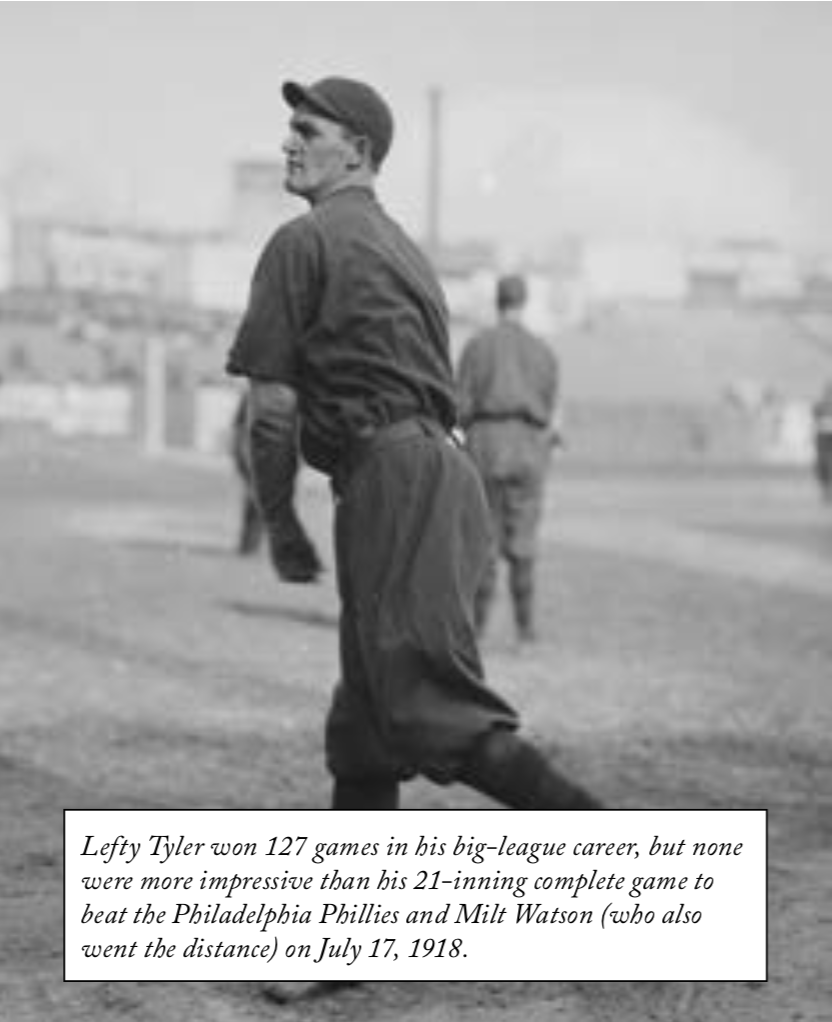 When Chicago Cubs hurler George “Lefty” Tyler arrived at Weeghman Park for the final game of a four-game series against the Philadelphia Phillies, the 28-year-old New Hampshirite probably expected a day off — and for good reason. Acquired in the offseason from the Boston Braves, where he had amassed a 92-92 record in parts of eight seasons, Tyler was only three days removed from the busiest stretch in his career. Over 15 days (June 30-July 14), he had started five times and logged 41⅔ innings, winning thrice to improve his record to 12-5. Ordered by skipper Fred Mitchell to warm up with all of the pitchers, except ace Hippo Vaughn, scheduled to start the following day, Tyler could not have imagined that he was on the precipice of a test of endurance that few pitchers had ever experienced.

In the midst of an 18-game homestand, the Cubs (55-25) were cruising to their first pennant since 1910. Leading the New York Giants by six games, the Cubs had won five straight before manager Pat Moran’s Phillies swept them in a doubleheader a day earlier. Three years removed from their last pennant, the fourth-place Phillies (37-40) were struggling and looking forward to ending their season-long 25-game road swing and returning the City of Brotherly Love.

The weather in Chicago evoked late spring more than midsummer, resulting in a small crowd on the North Side.1 Temperatures hovered in the low 60s and the Philadelphia Inquirer noted that the “wind [was] blowing straight off the lake,” portending a pitchers’ duel in the four-year-old park located less than a mile west of Lake Michigan.2

After Tyler set down the Phillies 1-2-3 in the first, the Cubs took their swings at 28-year-old right-handed swingman Milt “Mule” Watson, whom Philadelphia had acquired during spring training from the St. Louis Cardinals. His 4-2 record thus far in 1918 improved his slate to 18-21 in parts of three campaigns. Max Flack led off with a walk, and then scampered to third on Charlie Hollocher’s grounder just beyond the reach of first baseman Fred Luderus. Les Mann’s grounder plated Flack for the game’s first run. It would be the equivalent of more than two complete regulation games before the Cubs scored again.

Mowing down the Phils, Tyler allowed his first hit, in the third, when Bert Adams singled with one out, and then encountered trouble the next frame. Cy Williams reached safely when shortstop Hollocher fumbled his grounder and moved up a station on Luderus’s one-out single. The Phils caught a break when catcher Bill Killefer dropped a third “foul-strike” with Gavvy Cravath at the plate.3 Given another chance, the NL’s most fearsome home-run hitter, en route to pacing the circuit in round-trippers for the fifth time in the last six seasons, lined a two-out single, driving in Williams while Luderus reached third. After Cravath stole second, Tyler fanned Ed Hemingway to end the threat.

The Cubs threatened in the fifth when Killefer led off with a bunt and moved to third on Flack’s one-out single, but was left stranded when “hard fate” intervened, wrote the Inquirer, and the next two batters were retired.4

The contest was unraveled as a classic Dead Ball Era pitchers’ duel. Watson held the Cubs hitless from the seventh inning to the 12th;5 Tyler yielded only five hits through the first 13 frames.6 As the game wore on, both hurlers faced pressured-packed situations with runners in scoring position. In the 12th, Cravath reached on a two-out walk, Tyler’s only free pass of the game, and stole second. Hemingway’s hard grounder looked as though it would get by second baseman Zeider, but “Bunions” made what Chicago and Philadelphia papers described as a game-saving barehanded catch and throw to first to end the frame.

The Phillies “played an uphill game all the way,” opined the Philadelphia Public Ledger, as the Cubs relentlessly attacked Watson.7 In the 13th, Fred Merkle and Dode Paskert led off with singles, putting Watson on the ropes. Merkle committed a costly boner when he was picked off second by catcher Adams after Charlie Deal missed a bunt. Deal eventually singled, but the Cubs had failed to advance a runner to third with one out. Zeider grounded into the game’s only double play to end the frame.

“Tyler’s hardest innings,” noted sportswriter I.E. Sanborn of the Chicago Tribune, were the 15th and 16th when great defense saved the game.8 Left-fielder Les Mann made a running catch of Cravath’s deep fly, robbing the slugger of extra bases, for the first out of the 15th. After Hemingway singled and moved to third on Adams’s single, Tyler retired the next two batters. In the 16th, Irish Meusel’s two-out smash with Milt Stock on second “threatened to hit the wall in deep right,” wrote Sanborn, but Flack made a running stab with his shoulder against wall.9

Sandwiched between those scoring chances was the Cubs’ best opportunity to end the game. Mann and Merkle reached with one-out singles in the 15th and moved up a station on Watson’s balk. Watson intentionally passed Paskert to load the bases. With the infield drawn in, Deal hit a grounder and Adams tagged out Mann at the plate. Watson retired Zeider for the third out.

In the 16th, umpires alerted both teams that the game would be called at 7 P.M. so that the Phillies could catch their 8 P.M. train to Pittsburgh.10 Neither Watson nor Tyler paid attention to that pronouncement and seemed to catch a second wind. Chicago squandered a chance to end the game in the 19th when Luderus snared Mann’s two-out hot liner with Flack and Hollocher on base via singles.

The game was in rarefied territory as the 21st inning got underway with Tyler and Watson still battling. In only one other game in NL history had both starters logged at least 20 innings. That occurred precisely four years earlier when the Giants’ Rube Marquard outlasted the Pittsburgh Pirates’ Babe Adams in 21 innings, 3-1, at Forbes Field. It had happened once in the AL when Philadelphia rookie Jack Coombs and Boston’s Joe Harris each went the distance in the Athletics’ 4-1 victory in 24 innings over the Americans on September 1, 1906.11

Future Hall of Famer Dave Bancroft led off the 21st with a single, after which the Phils caught a break. According to the Tribune, Williams hit a high chopper toward Merkle, who “knocked it down”; however, Tyler failed to cover first, wasting a double-play opportunity.12 Stock’s deep fly to right field enabled Bancroft to reach third, where he was stranded.

As the 7 P.M. deadline rapidly approached, the Cubs were the recipients of Dame Fortune’s blessings. Mitchell called on Turner Barber, mired in an 8-for-52 season-long slump, to pinch-hit for Zeider, hitless in eight at-bats in the game. Barber reached on a swinging bunt, when according to the Public Ledger, Watson slipped and fell and was unable to reach the ball.13 The Cubs’ luck, however, was just starting. Killefer attempted to bunt, but was struck on his trousers by a ball. Pinch-hitting for Tyler, rookie Bill McCabe, who had hit safely in only four of 27 at-bats, attempted to sacrifice. The unintentional result was a perfect bunt to the third-base side to load the bases. The ball “started foul, hit a lump of dirt, and rolled back into the diamond,” wrote Sanborn.14 Flack’s fifth hit drove in Barber for the game-winner, ending the contest in approximately four hours.15

Chicago and Philadelphia newspapers were quick to praise both teams’ excellent fielding, especially that of shortstops Bancroft and Zeider, who handled flawlessly 19 and 12 chances respectively, and keystone sacker Hemingway (15 chances). “Time and time again they chipped in with startling bits of fielding,” gushed the Inquirer.16

The story of the game, however, was the pitchers. “Tyler’s exhibition was remarkable,” opined the Public Ledger. “He pitched beautifully all day and time and time again pitched himself out of the hole by sheer nerve.”17 He faced 77 batters, yielding 13 hits and walking one while fanning eight. His only run was unearned. Tyler’s heroic effort also marked the last of 16 times that he hurled at least 10 innings in a game. Watson, who was “in more dangerous positions” throughout the afternoon, continued the Ledger, was the hard-luck loser. He gave up 19 hits, walked four (two intentionally), whiffed five, and faced 82 batters. Only two of the game’s 32 hits went for extra bases; Hemingway and Hollocher doubled for their respective clubs. The Cubs-Phillies 21-inning game was one shy of the then NL record, set on August 22, 1917, when the Brooklyn Robins beat the Pirates, 6-5;18 the aforementioned Boston-Philadelphia game was, at the time, the longest game in big-league history.

15 Box scores did not provide the length of the game. The Public Ledger noted that the game was “[O]ne of the fastest. Twenty-One full innings were squeezed into four hours. …”

18 The Dodgers victory is noteworthy. It was their fourth consecutive extra-inning game (in five days). The others lasted 14, 10, and 13 innings for a total of 59 innings. Brooklyn went 1-2-1 in those contests.