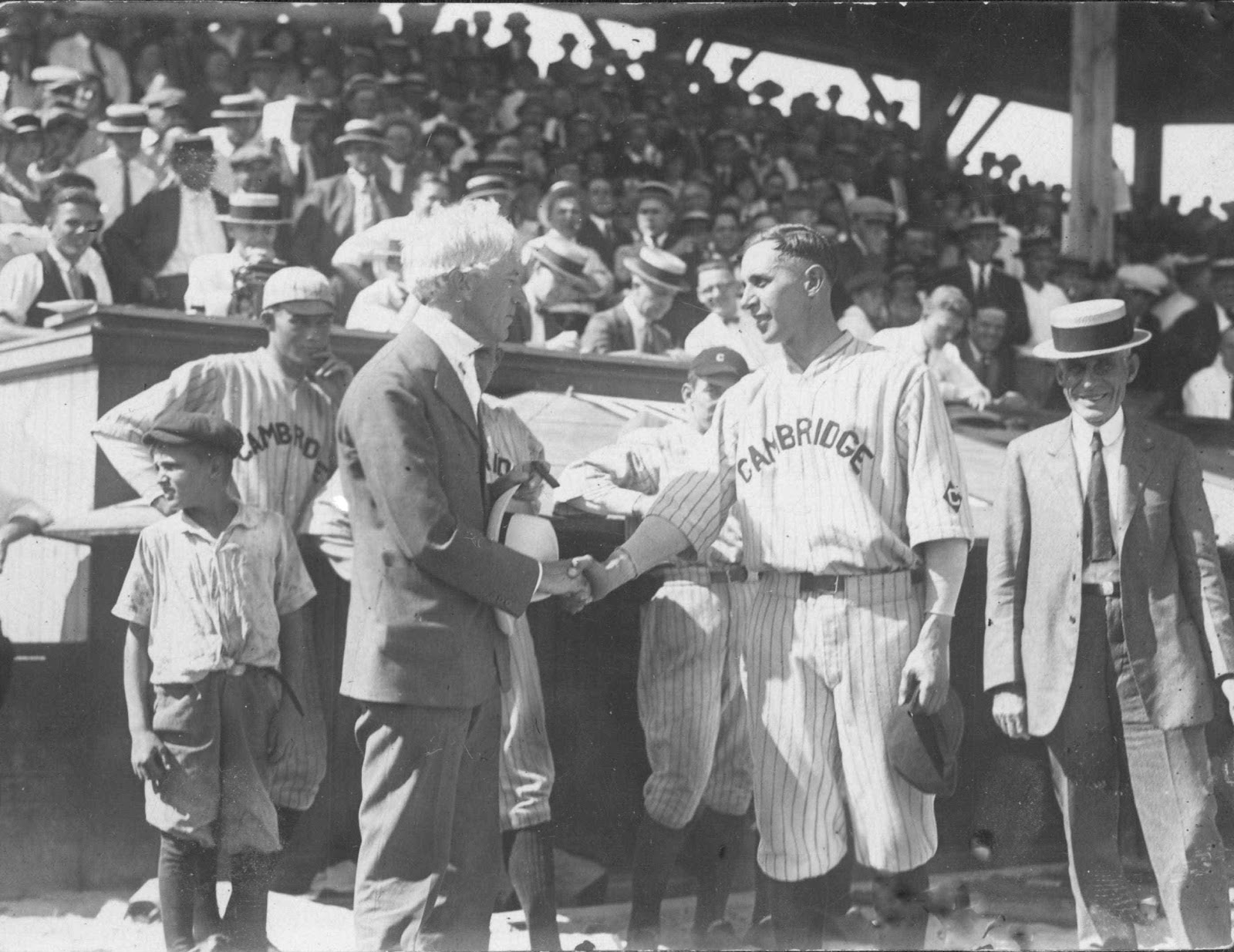 An early advocate for player’s rights, baseball commissioner Kenesaw Mountain Landis was a staunch supporter of minor league baseball. However, he never believed in the farm team concept. He felt the major-league magnates took advantage of the system by owning multiple ballclubs. Landis would have preferred that every minor-league franchise remain autonomous, telling the United Press, “How can you expect a man to go out and throw his hat into the air and root for a team when he knows that the team is owned by someone 1000 miles away and he is cheering and backing their interests, and not those of his own community. We ought to get back to a situation where a man can think of the town’s club as his own and there is the old-time traditional rivalry between the neighboring towns.”1

On May 20, 1923, Commissioner Landis attended a Class D Blue Ridge League game between Hanover and Hagerstown at the latter’s home field. Later that afternoon he traveled to Martinsburg, West Virginia, to watch another Blue Ridge League contest between Waynesboro and Martinsburg. It was during this visit that Landis received an invitation from M. B. Thawley, president of the Class D Eastern Shore League, to attend an exhibition game at Salisbury, Maryland, which he graciously accepted.

Announcing Landis’s trip to Salisbury, the Baltimore Sun wrote, “It is going to be more than a ballgame, and in the future, events [on the Eastern Shore] will be referred to as having occurred before or after ‘Landis Day.’”2 On the morning of July 19, Commissioner Landis left Annapolis, Maryland, aboard Van Lear Black’s yacht Sabalo. Black, a wealthy Baltimore banking executive, was a pioneer in the field of civilian aviation. Accompanying the commissioner on the Sabalo were J. Vincent Jamison, president of the Blue Ridge League; Edward Sparrow, sports editor of the Baltimore Sun; and D. Lee Staley, president of the Hagerstown team.

A few hours later, Landis and his party arrived at Claiborne, Maryland. President Thawley, along with the loop’s vice president, Walter B. Miller, was waiting at the dock to greet them. From there a motorcycle escort led by Lieutenant Mathias Pepersack, Maryland’s first state trooper, guided the automobiles containing the commissioner and his entourage on the 66-mile trip to Salisbury. The group made a stop in Easton to buy cigars. While in Easton, Landis addressed a crowd that gathered at the courthouse. After a few cordial remarks, Landis’s motorcade sped off.

When they reached the outskirts of Salisbury, the Evening Sun Band, made up of 55 newsboys from Baltimore, joined the procession. The exuberant musicians struck up a lively tune as they led the procession into town, which was bedecked with American flags and patriotic bunting. Most of the stores and businesses in Salisbury were closed in honor of Landis’s arrival. There were an estimated 14,000 people lining the streets hoping to get a look at baseball’s famous commissioner.

The motorcade came to a stop at Walter B. Miller’s residence, where Landis and his group went inside to enjoy lunch before the game. After lunch, the commissioner and his entourage drove the short distance to Gordy Park on Pine Street. The construction of the park, named after former White Cloud catcher S. C. Gordy, who had recently died, had been completed the previous year. It was considered the second finest ballpark in the state, after Oriole Park in Baltimore.

Nearly 4,000 fans were packed into Gordy Park with ladies of the Eastern Shore making up at least one-third of the crowd. The newspapers that covered the game implied that the female fans might have misread the “Landis Day” signs, thinking that they were announcing a “Ladies Day” game. The papers noted that the women were a bit disappointed but hid it well when they arrived at the ballpark.

Former Maryland Governor Emerson C. Harrington and all of the judges from the First Judicial Circuit were in attendance. There were also three of the five surviving members of Salisbury’s first organized baseball team, the White Clouds, in the stands. The former White Cloud players at the game were second baseman H. S. Todd, third baseman L.W. Gunby and first baseman S.S. Smith. Judge Stanley E. Toadvine and Gideon Jordan were unable to attend. The White Clouds were the Eastern Shore champions from 1872 to 1875.

Commissioner Landis received a thunderous ovation when he entered Gordy Park, which like the town, was adorned with patriotic bunting. Landis soon made his way down to the playing field where he shook hands with the players on both ballclubs.

From there, he walked to the mound wearing a Laurel Blue Hens hat to throw out the game’s ceremonial first pitch. After procuring Cambridge pitcher Ray Perry’s glove, Landis feigned spitting on the ball. Then giving an exaggerated leg kick, he tossed in a high one that Laurel leadoff hitter Jim Mannix swung at and missed. These good spirited antics delighted the crowd, eliciting another hurrah from the Gordy Park faithful. The commissioner proceeded to walk around the perimeter of the ballpark waving to the fans in the bleachers as well as those behind the roped off areas along both foul lines. Re-entering the grandstand, he took his seat in the VIP box.

As of July 18, Cambridge was in first place in the Eastern Shore League with Laurel and Dover close behind. Pocomoke City, Salisbury, Crisfield and Parksley followed in the standings.3 League directors selected the loop’s two best ballclubs, Cambridge and Laurel, to play in front of baseball’s esteemed commissioner. The Eastern Shore League suspended play on July 19 so players and fans from around the league could attend the game.

Herb Armstrong was the player-manager of the Cambridge Canners. Armstrong broke into pro ball with Reading in the Class B New York State League in 1917. Among his many lifetime accomplishments, Armstrong became the business manager for the International League Baltimore Orioles. He later assumed the same role with the American League Orioles when they rejoined the junior circuit in 1954.

Baltimorean John “Poke” Whalen was the manager of the Laurel Blue Hens. Whalen played for a number of minor league clubs as well as the Baltimore Dry Docks, arguably one of the greatest independent teams of all time. He went on to scout for five different major league franchises.

Ray Perry (9-11) was the starting pitcher for Armstrong’s Canners while Charlie Reese (4-6) took the mound for Laurel. The game turned out to be a one-sided affair with Cambridge coming out on top 10-5. The score would have been worse if not for Laurel right fielder Christian Fitzberger’s three-run homer in the top of the ninth.

Perry tossed a complete game for Cambridge, scattering nine hits, walking four and fanning seven. Washington College alumnus Bill Johnston played third base for the Canners. He stroked three hits, including a double. Cambridge shortstop Jake Flowers went one-for-two with a home run. Flowers’s contract was sold to the St. Louis Cardinals a few weeks earlier for $1,500 and a player to be named later. Flowers wasn’t required to report to the Cardinals until the conclusion of the Eastern Shore League season. Cambridge leftfielder Matt Flood chipped in with a pair of singles and a two-bagger.

Charlie Reese was tagged with the loss. He allowed nine hits in four innings of work. Dick Early (9-8) relieved him in the fifth and finished the game. Blue Hens second baseman Jimmy Lyston connected for two hits in three official times at bat. Lyston had the rare distinction of playing in front of Landis twice that season. In May, he was a member of the Waynesboro Villagers when the commissioner attended their game against Martinsburg. Laurel Shortstop Bill Quinn and pitcher Dick Early each contributed two hits in the loss.

The defensive play of the game occurred in the third inning when Laurel catcher Marion Staylor caught his Cambridge counterpart Joe Bird leading too far off second base with two men on and none out. The reporter for the Wicomico News wrote, “Staylor picked the former [Bird] off with a lightning throw which Lyston relayed to Hitchcock at third in time to catch the runner.”4

At the conclusion of the game, a banquet was held in the social hall of the newly erected Bethesda Methodist Protestant Church in Salisbury. Over 300 tickets were given out for the occasion. The menu included fried chicken and fresh vegetables along with local seafood delicacies. Players and management from every team in the league along with a select few from the local social circles were invited. When everyone finished eating, the doors of the church were opened to the public. The commissioner then addressed a large crowd that was gathered outside. In his speech, Landis praised the Eastern Shore residents for their patriotism during World War I. He also complimented the league officials on the fine way they ran their circuit. In addition, he lauded the old-time White Cloud players as true pioneers of our national pastime. Landis concluded his oration by thanking everyone for his wonderful reception, promising to return in the near future. Thus ended one of the most memorable days of baseball on the Delmarva Peninsula.

Keenan, Jimmy. The Lystons: A Story of One Baltimore Family and Our National Pastime (self-published, 2009).

Special thanks to Ray Nemec for assisting me with the proper spelling of Cambridge third baseman Bill Johnston’s last name. The newspapers that covered the game as well as the 1924 Reach Official Baseball Guide spelled it as Johnson.

3 The Milford, Delaware, team was caught with six class men on their roster. Faced with the prospect of forfeiting all of its games from June 9 on, Milford dropped out of the league. The Class Rule allowed each club to carry three players who had played higher than Class D ball. For a position player the limit was 25 games. For pitchers it was 15 games. This rule also applied to the managers who were often on the active roster. The loop lost another team later in the season when Pocomoke City disbanded on August 21.